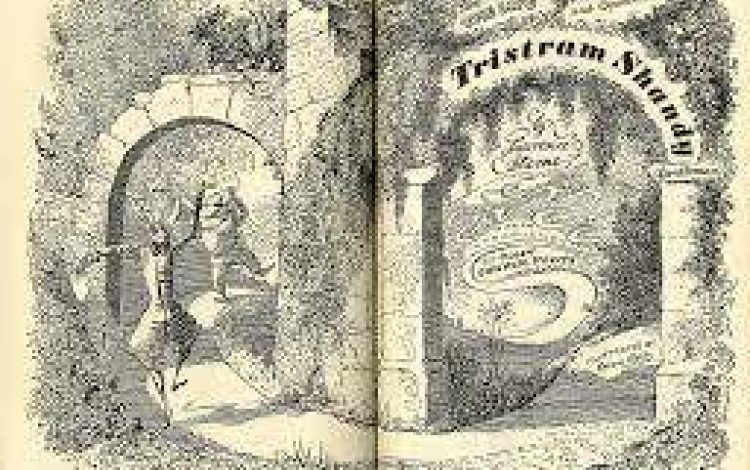 ‘At present, nothing is talked of, nothing admired, except what I cannot help calling a very insipid and tedious performance: a kind of novel, called The Life and Opinions of Tristam Shandy

They were right about the oddity, and the going backwards. The novel mostly unfolds before its hero has any Opinions, and a third of it before he has a Life – he isn’t born until volume four, and the action ends in a cul-de-sac several years before his birth. There is scarcely room for him amid the anecdotal clutter and human relics lying around from a previous age. Anton Lesser’s unabridged recording of the novel for Naxos is wonderful, because with Sterne we need the whole package – the way the thin air of experiment thickens unexpectedly into the novelistic domesticities of Walter and Mrs Shandy, and Uncle Toby and his loyal corporal Trim; and Parson Yorick in the parlour, who cannot abide gravity; and the midwife and Dr Slop who jointly attend on the eventful birth of the hero; and their servants and animals. (Sterne makes us feel the texture of an age in which England had more sheep than people and a parson could love his horse.)

Anton Lesser’s defence is all-out attack, abetted by candour and an ingenuous eagerness – like an 18th- century hero, in fact. He rightly avoids irony (the novel’s ironies being situational rather than verbal). It is a hobby-horsing voice with an elocutionary flourish, and his energetic delivery drives Sterne’s mazy sentences, which might otherwise run out of steam. At the same time Lesser lets Sterne’s ‘periods’ have free rein; he parses them so confidently that he does not mind where they go, for they have an Augustan lucidity even at their most wayward (they merely wear their syntax on the outside, as the Pompidou Centre wears its pipes). This is a feat of intelligent listening, first and foremost, and it makes hearing the novel more involving for long stretches than reading it for ourselves, which can be a fearful and blindfold business.

The declamatory aspect is key because Tristram’s version of events is all performance (as Walpole perceived), his characters reading aloud or speechifying or quoting or sermonising. But this recording also pays attention to the unsaid and unsayable. Sternes’s digressive principle is based on Locke’s theories of the association of ideas, which seemed to explain the comically ungovernable workings of the head and heart. We muddle our stories, like Uncle Toby. We cannot know our own minds because they are confounded by the vagaries of language – and are attached to bodies, which have minds of their own. Which is why gesture is so important, and is of a piece with other unhearable things in the novel, its blank pages and asterisks and dashes and so forth. At this point an audio reading becomes an intriguing commentary on what Sterne is up to.

By the same token, we cannot know each other. The final chapters, when the comedy of the sexes comes to a head with Uncle Toby’s thwarted wooing of and by Widow Wadman, are incomparable. Lesser does justice to Wadman’s genteel but incorrigible solicitude concerning Toby’s wounded groin, and to the uxorious parryings between Walter and Mrs Shandy, the blandest exchanges in the history of the novel, in which nothing is said yet something (but what?) is intimated. Anton Lesser reads these passages with just enough side-wind of hesitancy or reserve, as of something blowing the reading slightly off-course, to allow their silences to sound in our ears. In an age which felt suddenly confident that the novel could know everything, Sterne extended this to include the knowledge that other people are a mystery story.