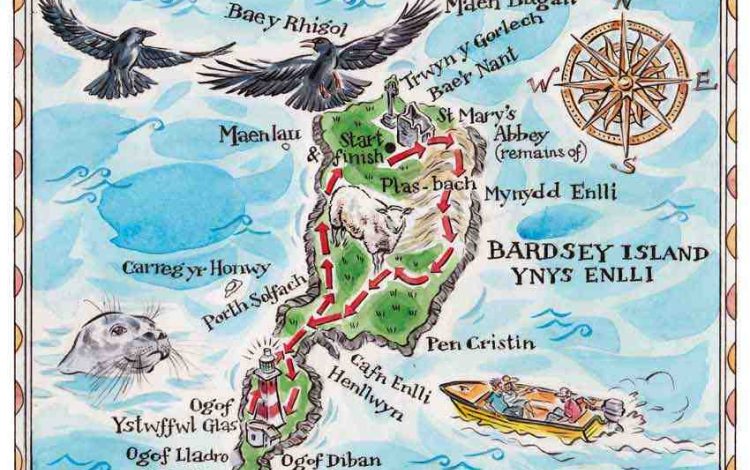 A visit to Wales's holy island

We walk to perform daily tasks and we walk also to escape. And there is no better act of escapism than a stroll round a small island.

The most perfect small island I have ever encountered is a rock off the western tip of Llŷn Peninsula: Bardsey. Its Welsh name, Ynys Enlli, ‘the isle of the currents’, poetically describes its predicament, cut off from the mainland by a dazzling, treacherous swirl of blue-green water that in winter can render it inaccessible for two weeks at a time.

When conditions are good, however, Colin Evans, the Bardsey boatman, can zip you across in his little yellow boat and you can circumnavigate the island.

Bardsey has all small island bases covered: a red-and-white-striped lighthouse, tiny inlets where seals groan, small fields, few trees, no cars and a population of about five permanent residents and a few more holidaymakers who can stay in scenic Victorian farmhouses, surrounded by stone walls to repel the wind.

But it has another more amorphous quality. It is Wales’s holy island, the equivalent of Iona in Scotland and Lindisfarne in England. It has been a place of pilgrimage ever since Celtic Christian monks prayed there, and an enterprising Welsh 12th-century bishop, Urban of Llandaff, marketed it as ‘the island of 20,000 saints’. In the Middle Ages, it became the place to be buried. The devout believed it would guarantee swift passage to the next life.

Christine Evans, Colin’s mum and a fine poet, believes Bardsey’s spiritual credentials are an accident of geography. Bardsey turns its back on the mainland, with its eastern side being a hill of 550ft rising from the Irish Sea. Its habitable land faces west, across the Irish Sea. So life here is a perpetual contemplation of an empty western horizon. In older times, we believed we departed this life in a westerly direction. Every evening here at sunset, a path of golden light on the water shows you the way.

I began my walk when the sun was still obscured behind Bardsey’s ‘mountain’, Mynydd Enlli. It looked quite a climb; I ascended through heather and gorse on the island’s northern flank for a lung-bursting 15 minutes to reach the top. The views were worthy of a big mountain – east over to the mainland of North Wales, with hazy blue mountains beyond and frothing, cobalt sea below. There was no sign of any other human; instead I enjoyed the company of flying ants, silver Y moths and a pair of choughs, those wonderfully acrobatic ‘sea crows’.

The descent was gentler on the southern flank, and I then took the track to the lighthouse at the island’s south-western tip, the tail of this tadpole-shaped island. Sheep loafed between the broken stone walls that once divided small fields. The flat, green ‘west end’ felt like another world altogether.

On my walk back up the island to my accommodation close to the church, I called in at the old ‘pig kitchen’ of Carreg Fawr farmhouse. Here, a nun called Sister Helen Mary created a cell to pray in when she moved from Oxfordshire to commit to a solitary life on Bardsey in 1969. She lived there pretty much as a modern-day hermit for the next 15 years.

Visiting monks, nuns and vicars still hold services in the simple, whitewashed room where she worshipped. Its silence was broken only by the hum of bees at the fuchsia and the chitter of swallows dipping over the cobbled yard.

Surrounded by so much sea and a surfeit of air that delivered both unceasing wind and a strange stillness, I found that space and time began to do unnerving things. The measurements of conventional life, of clocks and kilometres, warped and flexed. Had I been walking for hours or minutes? Miles or yards? It ceased to matter – which is one great reason to escape to walk on a small island.

This route is simple: follow the edge of the land in a rough circle! Day trips to Bardsey with Colin Evans (www.bardseyboattrips.com) (check weather conditions the day before); self-catering holidays via the Bardsey Island Trust (www.bardsey.org)