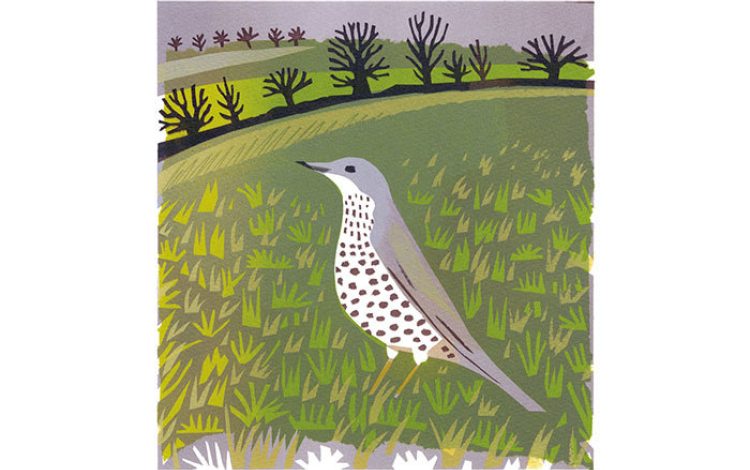 Bird Recognition books described the song thrush as a winter singer ‘except in bad weather’ with ‘full song’, March-July. By contrast, the mistle thrush (Turdus viscivorus, ‘devourer of mistletoe’), almost three inches longer than its brown, less boldly spotted, more tuneful cousin, sings irregularly from mid-November. There is ‘song and display’, the book adds, from the ‘longest night’ to June.

Moreover, as its colloquial name ‘stormcock’ shows, it chooses to sing from a treetop whatever the weather. For that reason, in Thomas Hardy’s popular Christmas poem, The Darkling Thrush, – although the bird is described as ‘small’ and its singing as ‘carolings’ – it is generally identified as a mistle thrush.

The melancholy Hardy contemplates ‘Winter’s dregs made desolate’ when

At once a voice arose among

In a full-hearted evensong

Had chosen thus to fling his soul

Upon the growing gloom.

Edward Thomas’s The Thrush is similarly regarded a mistle thrush:

I hear the thrush, and I see

Him alone at the end of the lane

Near the bare poplar’s tip,

The 17th-century polymath Sir Thomas Browne gave the mistle thrush its name. Like the song thrush, it is partial to worms and will bash snails on an anvil-acting stone to break the shells. Toxic to humans, mistletoe berries were an ingredient of trappers’ bird lime; thus they were often the bird’s ironic downfall as much as its sustenance. The untidy nest can appear in odd places, such as a traffic light in Beeston, Leeds, which made news in 2010. Usually it is a wary country bird, only seeking town in harsh weather, but autumn flocks can briefly alight in city parks. With winter approaching, it pairs again.

Raising his voice as the gusts still roared

A speckled mistlethrush told me clear,

That harvest was garnered, that

That summer was ended, that autumn

In The Darkling Thrush, Hardy finds consolation in its Christmas ‘carolings’ defying the blast; even salvation:

So little cause for carolings

Of such ecstatic sound

Was written on terrestrial things

Afar or nigh around,

That I could think there trembled through

Some blessed Hope, whereof he knew

And I was unaware.

The 2019 Bird of the Month calendar is available from www.carryakroyd.co.uk

Bird of the Month: The Shelduck

Bird of the Month: The Jay