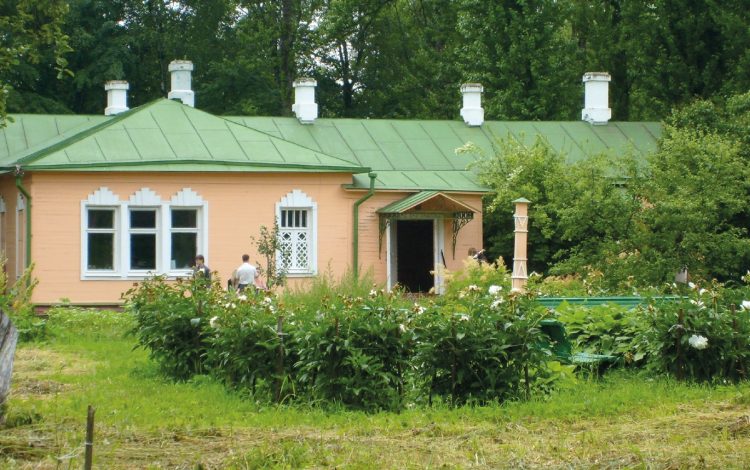 The orchard where Chekhov wrote The Seagull has been copied in the UK. As a new film version appears, Sara Wheeler visits both gardens

‘I think that, if I wasn’t a writer, I could be a gardener,’ Chekhov told a friend. The author-doctor was a passionate horticulturalist and arboreal conservationist.

At the Hampton Court Palace Flower Show on the outskirts of London this summer, specialists recreated Chekhov’s garden, part of a network of green spaces for therapeutic use in the UK, Russia and Ukraine.

When I visited the Chekhov garden at Hampton Court, sunlight glinted off a samovar on a wooden table surrounded by a hayrick, an apple tree and foaming bushes of various types of the herbaceous perennial Phlox paniculata. The Russian ambassador appeared in an alarming, custard-coloured tie.

Rosamund Bartlett, Chekhov’s translator and biographer, conceived the garden idea. ‘Our aim,’ she says, ‘is to create welcoming, tranquil places of beauty in healing environments. Chekhov’s work as a doctor was inspired by a deep awareness of the part played by the natural environment in our physical and spiritual wellbeing.’

Henry Marsh, the distinguished neurosurgeon-turned-writer, recently talked about the therapeutic role played by a garden he created at St George’s Hospital in London. (Marsh is a patron of the Anton Chekhov Foundation.)

The British Chekhov garden remains rooted in Russia, and in the playwright. The garden’s co-designer Anna Benn studied in Leningrad in the 1980s. The Anton Chekhov Foundation has sponsored the project – in association with the Royal College of Medicine, which champions outdoor healing.

Dr Michael Dixon OBE, former chair of the NHS Alliance, was so keen on the scheme that, after Hampton Court, he moved the whole garden to his Culm Valley Integrated Centre for Health in Devon. The plants in the Devon garden – bedded in this September – are inspired by Chekhov’s orchard and garden: apple trees, silver birch, Scots pines, alliums and rusty foxgloves.

Anton Pavlovich Chekhov was born in 1860 in Taganrog, a port on the Sea of Azov. His grandfather had bought himself out of serfdom and the family progressed to the ranks of the provincial elite; though, in 1887, Chekhov’s father, a tyrannical grocer, lost his money. The playwright-to-be left Taganrog at 19 to attend medical school in Moscow but, in his head, he never really left for long.

As a medic, he became familiar with the corpses of children, syphilitic from birth, who had perished of cold and starvation. He never made money, as he often treated peasants without charge. Chekhov famously spoke of medicine as his wife and writing as his mistress, later recycling the quip to say that fiction was his wife and the theatre his mistress.

He suffered chronic ill health. From his mid-twenties onwards, his tubercular lungs spurted blood every spring. In 1892, he bought the small country estate of Melikhovo, about 40 miles south of Moscow. It had 600 acres of birch wood and pasture, a small lime avenue, and a cherry orchard (in Russian, the word for garden, sad, also means orchard), which Chekhov augmented with an extra 30 trees of the Vladimir variety. The main house was small and dilapidated, with no bathroom (though a flushing lav arrived in 1894). There were outbuildings, also decaying, and three starving horses.

I saw how beautifully Chekhov had restored Melikhovo when I visited. I caught a train from Moscow’s Kursky station and travelled for an hour-and-a-half, past plastic factories and Cheopsian pyramids of logs awaiting dispatch.

Chekhov painted the single-storey house pale salmon. When he sat at his writing desk in winter, hares stood on snowdrifts and looked at him. He could fish in a pond from his room, he wrote proudly (he had always been an angler and once caught 57 carp in a day).

A line of sick peasants snaked permanently through the bushes and trees of the neighbouring wood. Chekhov loved woods. In Uncle Vanya, Astrov makes a fuss with his concern for the destruction of Russian forests.

In between writing masterpieces, Chekhov liked reading seed catalogues and, like all gardeners, he had to cope with surprises. Whatever type of rose he planted, the blooms always turned out to be white. The view from his desk at Melikhovo was of apple trees in a meadow of grasses and healing herbs (big in Russian medicine), with silver birch and conifers at the boundaries. Outbuildings included a clapboard chalet in the cherry orchard, with the hand-painted sign, ‘My house. Where I began The Seagull.’

‘I read a Russian herbal to prepare for the planting,’ said co-designer Hannah Gardner. ‘And it turns out that the first domesticated apple tree grew in Russia, so there is a lot of history in this small space.’

Chekhov’s parents moved in to the main house, and various siblings came and went. They planted a kitchen garden (the people in the district had never seen a tomato before); they pickled gherkins and made jam; listened to larks and nightingales; bought calves, pigs and sheep. When his father died there in 1898, the heart went out of it. In 1899, Chekhov sold Melikhovo to a timber merchant who chopped down the cherry trees.

Chekhov moved to Crimea to benefit from its mild climate, eventually building a house called the White Villa there with the proceeds of The Seagull. That villa, too, had an orchard, and the playwright planted mulberry, almond, peach and cherry trees as well as cypress and birch.

His four major plays tumbled out in a period of eight years, all featuring gardens and woods: The Seagull in 1895, Uncle Vanya in 1897, The Three Sisters in 1900, and The Cherry Orchard in 1903.

These plays speak for themselves, don’t they? Chekhov considered all four comedies. He didn’t see much difference between tragedy and comedy. Sonya’s famous last line in Vanya – ‘We shall rest’ – expresses Chekhov’s quiet acceptance of people’s misery. Their only option, after all, was acceptance. A garden was solace of a kind.

As I peeped through the window of the cottage at Melikhovo, it was hard to imagine that Trigorin, the writer character in The Seagull, had been conjured out of that thin air. When he planned the play, Chekhov wrote a letter saying the piece was to have ‘little action; lots of love’. In The Seagull, the lake is an offstage character, the focus of that particular Chekhovian longing that stays in the mind when one has left the theatre. ‘We are sleepwalking to oblivion,’ says Konstantin, the playwright in that play.

Chekhov died in Badenweiler, in Germany, on a cure for his TB. He was 44. In a memoir of his friend, Maxim Gorky fretted over the fact that Anton Pavlovich’s body drew into Moscow from Germany in a refrigerated railway carriage marked ‘Fresh Oysters’.

Chekhov would surely have approved of the idea of healing gardens. He once wrote in a letter, despite the fact that he had left his faith behind in the nursery, ‘In the forest, you can feel the presence of divinity.’

‘The Seagull’ is in cinemas from 7th September

Listen to Sara in discussion about the gardens on the Oldie Podcast, here.