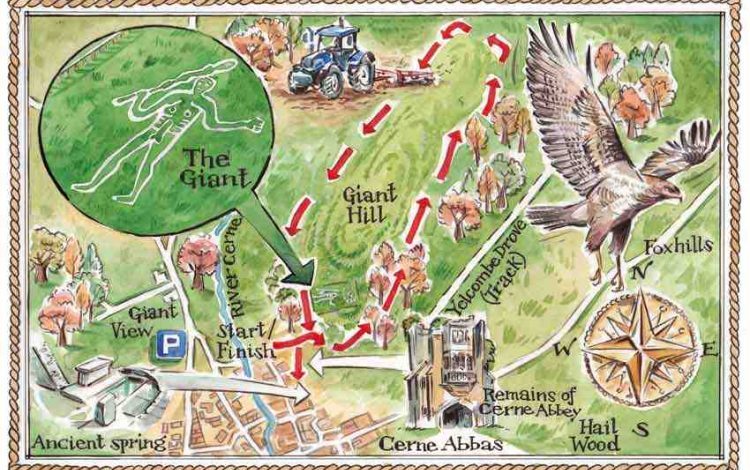 My friend Emily ran through our strolling options as we stood in the small car park on the edge of Cerne Abbas. ‘We’ve walked the hell out of this since lockdown.’

Emily is fortunate because, when locked down, she can take her daily exercise around one of the most interesting villages in England. Her walks are further enlivened by the figure cut into the chalk hill whose gigantic appendage matches the fruitiness of her language.

‘No one knows how old he is,’ said Emily of the Giant, as we ascended a steep path around the Giant’s back and into the woods – her Classic Giant round.

The Giant looks like an ancient pagan fertility symbol, but is he a 14th-century practical joke? When archaeologists excavated the trenches filled with chalk that make him, the snails at the bottom were no older than medieval.

Usually we can dig away the earth to identify clear episodes in our history, but the ground around Cerne Abbas has been so well worked that its layers mystify as well as enlighten. Emily is convinced the Giant is far older than medieval and its trenches must’ve been dug out and refilled. Why would medieval monks draw an old god on the hill?

The path we walked up began on a broad swath cut into the hillside, an ancient champagne terrace created by monks to grow vines on the south-facing slopes. Cerne’s chalk terroir matches the French region, and those old monks knew how to live well.

Further up, the path became a gorgeous green hollow way known as the Priest’s Way – the route from Cerne Abbey to the Wessex Ridgeway, the A303 of its day.

A buzzard’s call broke the stillness as we emerged from straggly hawthorns onto the hilltop. It seemed crazy that these heights were ploughed fields (I pictured the soil cascading into the valley on a wet day) but, for an amateur archaeologist such as Emily, this was paradise.

She came here religiously if it rained just after the farmer had been ploughing. The rain cleansed and buffed any ancient flint tools unearthed by the plough, revealing them to Emily’s beady eye.

For 10,000 years, people have lived on these high downs – particularly in winter, to escape the gloomy, flooded valleys – and modern ploughs have been going so deep for only 50 seasons. So there are plenty of finds here still.

We found nothing underfoot on this dry day, but enjoyed the space, peace and fine view of rolling downs and the Minterne estate in the distance.

Back on the perpetually floral, grassy downs for the descent into Cerne, Emily pointed out the Roman camp on the opposite hillside.

Like the monks, the Romans knew how to live well, she said, and the camp’s position would have provided them with the best view of the ancient Giant.

During the war, he was covered up. Today, aircraft from RNAS Yeovilton still perform admiring flypasts. It is cheering to imagine successive groups of people with vastly different beliefs all taking care of this chalk behemoth.

We finish our walk, following an avenue of limes to Cerne’s sacred well, which predates the ruins of the 1,000-year-old abbey. The only sound is a languid gog-gug-guggle of water emerging from the hillside onto ancient, iron-stained stones.

This steady trickle is why all these layers of history have accumulated here. Pagans drank the clear spring water to become pregnant. Later, Christians arrived and told their own stories about it.

When St Augustine came to Cerne, he saw humble shepherds and asked them if they would like to be refreshed with beer or water. ‘Water,’ the good men replied, and St Augustine rewarded their sobriety by thrusting his staff into the ground, from where sweet water has flowed ever since.

I drink it, cautiously, and drive on: wholly refreshed, as ever, by the simple act of taking a walk.