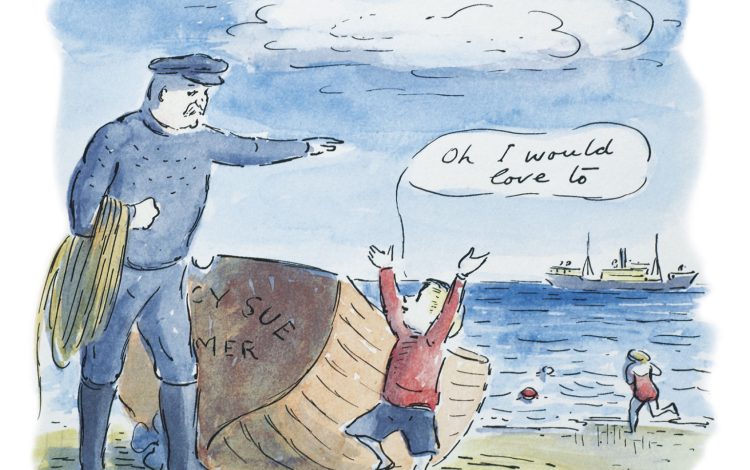 The first major exhibition for forty years of the work of Edward Ardizzone is on in London until January. By Laura Gascoigne

‘The English are a nation of illustrators,’ wrote Osbert Lancaster; ‘all our best artists,  are raconteurs. And as war seldom fails to be a first-class story, we can always look forward with some degree of confidence to a recurrent Renaissance as soon as the guns go off.’

Lancaster made this observation in a review of the 1941 exhibition of Official War Artists at the National Gallery which happened to include an exhibitor destined to become one of English art’s greatest raconteurs. Among the first artists to be appointed by the War Artists’ Advisory Committee, Edward Ardizzone was selected for what its chairman, Kenneth Clark, foresaw as his ability ‘to show the earthy part … what military life was really like’.

‘In one way, it was the best thing that could possibly have happened,’ Ardizzone later reflected. The one way was the tax-free income of £650 p.a. it provided for an artist who had previously scuffled to survive on the odd freelance illustration and exhibition of paintings which, with their familiar cast of well-upholstered tarts, well-oiled gents and local lowlifes sketched in the streets and pubs around his Elgin Avenue studio, were appreciated by critics but not designed to find a ready market among middle-class collectors.

In sending Ardizzone to war, Clark catapulted him from the fug of the snug into an arena that gave full scope to his talents. His rarely seen war pictures are the revelation of a major new retrospective at the House of Illustration – the first for forty years – accompanying a new book by Alan Powers...