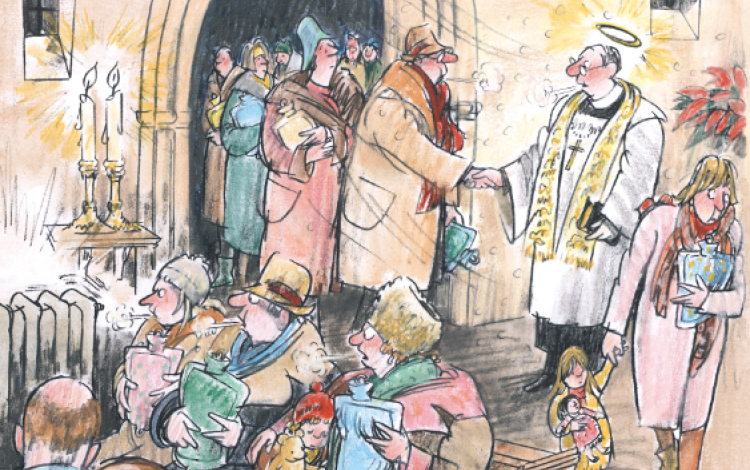 25 years ago, Ysenda Maxtone Graham worried that the Church of England would be swamped by electric guitars in the nave and evangelical priests. In fact, traditional, beautiful worship survives

How do you know what you are going to get when you go into a church?

Take Midnight Mass. Most of us have been to wonderful Midnight Masses – and to ghastly ones. The wonderful ones don’t have to be in cathedrals: they can be in tiny, damp rural churches with gurgling Victorian radiator pipes and an atmosphere of delicious, Christmassy enchantment.

The ghastly ones can happen anywhere, and you can find yourself stuck in one by mistake, if you happen to be staying with relatives in the wrong place at the wrong time.

My recent bad one was a Midnight Mass in the rural East Midlands. Our children, wide awake and sleepy, had been allowed to stay up late to experience the thrill of It Becoming Christmas Day While You Are Actually In Church.

We arrived at what looked like a normal, pretty village church, into which the locals were, oddly, not pouring in great numbers. We should have heeded that warning. The service was dismal.

The vicar conveyed less excitement about the thought of baby-Jesus-inmanger-at-this-very-moment than a hospital midwife after her tenth delivery of the day. She read the lessons in a deadpan voice, prayed a hundred dreary prayers for all the trouble spots of the world, and gave us a long sermon starting, 'Let me tell you a story.'

During a particularly tedious patch, I looked at my watch and whispered to the child next to me, by now slumped in boredom, ‘It’s Christmas Day!’ Such experiences can put The Young off going to church ever again.

I’ve developed a nose for sniffing out kindred-spirited and non-kindred-spirited churches and clergy. In 1993, I wrote a book about the Church of England, and could spot ‘the markers’.

Altar with no room to stand behind: beware. That meant the church was so high Anglo-Catholic that the priest, with his back to the congregation, would probably be anti-women-priests.

In those days, my dread was that, by 2017, the whole Church of England would have become raving evangelical. I dreaded this so much that I became hypersensitive to the smell of the jerseys of congregations – one of my key markers.

Evangelicals wore what I used to call ‘Christian jerseys’: thick, woolly, often hand-knitted, worn every day and rarely washed. Because they hugged you, to welcome you and share the sign of peace, and because they were physically active during worship, you had to get up close to the jerseys – and the jerseys were quite sweaty. I dreaded this scent making its way into cathedrals, along with fat wires in the chancel connecting electric guitars to amplifiers, and cathedral choir stalls vibrating to love songs to Jesus.

To my relief, this prophecy appears not to have come true – yet. I feared that my best friends would become born-again Christians and would adopt the glazed expression of the ‘saved’ and try to ‘save’ me. Not a single friend has.

The news is not quite so good, if you share my dread. I just have good taste in friends and I’ve avoided evangelical worship centres for a quarter of a century.

Eighteen of our 42 current bishops are now from the evangelical tradition – and the trend is in this direction. Although cathedrals still have a measure of autonomy, and have been able to keep deans mostly High Church, dioceses have become very right-on.

The numbers tell the story: whereas village churches are utterly thrilled if one new couple starts coming regularly on Sundays, Evangelical churches are the ones whose numbers are soaring.

Holy Trinity Brompton, in west London, has sent husband-and-wife couples off to ‘plant’ 36 HTB-style churches in under-attended churches across the UK, raising congregations from a pathetic twenty to 500 and more. The jerseys in such places are becoming more and more Boden and Charles Tyrwhitt by the week.

You can see why High Church-minded clergy might be feeling as sidelined and nervous as Conservative MPs do in marginal seats. Thank goodness for Christmas, because at least all the churches are full then, when millions of lazy ‘C and E’ (Christmas and Easter) types stir ourselves to turn up, and morale is temporarily boosted.

The markers I used to delineate different sorts of churchmanship are now more blurred – and it’s much more usual for an evangelical type to become High Church than vice-versa.

the Archbishop of Canterbury, Justin Welby, used to be an ex-public school, HTB, charismatic type, but he now uses Benedictine spiritual disciplines and has founded a quasi-monastic group in Lambeth Palace called the Community of St Anselm.

The Archbishop of York, John Sentamu, brought up in the evangelical tradition, has said homosexuality is not a sin – a non-evangelical thing to say. The Bishop of Chelmsford, Stephen Cottrell, tells me quite a few ordinands in his diocese, trained at hardline evangelical theological colleges, do placements in Anglican Catholic churches. They are bowled over by the beauty of Catholic-style worship and more liberal thinking.

‘We used to pray for “Catholic renewal” in the 1980s,’ he told me. ‘I am now of the very strong view that that prayer is now being answered in charismatic, evangelical Christians. They’ve rubbed shoulders with Catholic spirituality and it’s captured their imagination.’

One clergy marker was whether they were anti-women priests – still works a bit. Extreme Anglo-Catholics have a ‘flying bishops’ ecosystem, halting contamination by those whose ordination they don’t acknowledge. Forward in Faith’s website states, ‘We are unable in conscience to accept the ordination of women as priests and bishops.’

This view is increasingly absurd in an age of gender dysphoria. Martyn Percy, the Dean of Christ Church, Oxford, says. 'Will Forward in Faith be able to tell us at what point a person's valid ordination either evaporates or crystallises in the process of gender transition?'

Some clergy have had sex changes, and this always causes a theological headache for extreme Anglo-Catholics.

A useful gauge is the ‘gayometer’. While most of society couldn’t care less whether people are straight or gay, provided they’re kind and happy, the Church of England is still embarrassingly caught up on this issue.

So I scrutinise the clergyperson: do they interpret the Bible to think practising homosexuality is an abomination; or do they read it as ‘Jesus was non-judgmental – he was only rude about self-righteous Pharisee-types who knew they were “right”’?

The Evangelical Alliance's 'Ten Affirmations' still say, 'habitual, homoerotic behaviour; warrants 'consideration for church discipline'. That 'discipline' happens: Jayne Ozanne, an evangelical writer, broadcaster and campaigner who bravely came out as a lesbian, tellse me she is now 'in exile, unwelcome at her evangelical church.

‘I have a dear gay friend,’ she says, ‘whose partner of twenty years has cancer. She asked her church leader to pray for them both – but they’ve asked her to step down from all her church duties.’

In her exile, Ozanne is worshipping at the more enlightened and welcoming University Church in Oxford. She now describes herself as ‘Post-Evangelical’. This, it seems, is a new and growing category of Christian.

A ‘Post-Evangelical’ is someone who started out at an Evangelical church (Ozanne calls them ‘gateway churches’) and has moved on, finding real life is more complicated than the Evangelicals dream of in their philosophy.

Win a copy of Odd Bird by Lee Farnsworth