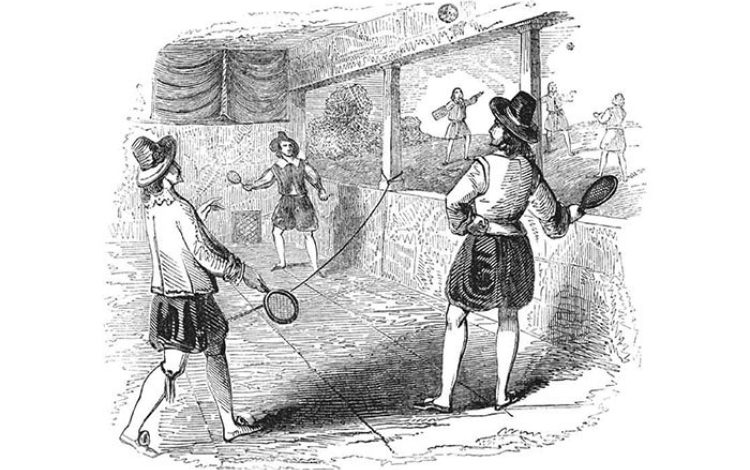 George Trefgarne charts the history of mockery in real tennis

May is an auspicious month for real tennis. On 2nd May 1536, Anne Boleyn was watching a game at Greenwich Palace when a message came that she should report to the Privy Council, where she was promptly arrested.

By the 16th century, it was a sport commonplace across the courts of Europe, but we know from Shakespeare’s Henry V that it was played well before then. The arrogant Dauphin sends the fiery young English King a box of tennis balls, which does not go down well.

The closest written source for this alleged insult is Raphael Holinshed’s Chronicles, published in the 1580s, which we know Shakespeare relied upon. Either way, the playwright makes good sport of it and repeatedly uses the word ‘mock’ in Henry’s response, echoing the sound of a racket striking the ball.

Real tennis is actually a fast-growing sport and, in the past five years, new courts have been opened at both Radley and Wellington College.

If you fancy trying out what Baldassare Castiglione recommended in The Book of the Courtier as ‘another admirable exercise, and one befitting a man at court’, you can simply call up nearly any one of the 20-odd clubs in the country – they are also to be found in America, Australia and France – where you can expect a warm initiation into a surprisingly unpompous ritual.

You can find more informal clubs at Holyport in Slough, Hatfield House, Hayling Island or Falkirk Palace in Scotland.

My wife gave me some lessons at the Royal Tennis Court Club at Hampton Court, rebuilt from the Tudor original by Charles II. She correctly reasoned that a new experience is often more fun than a wrapped present. Real tennis is a sport that is more brain than brawn and the current world champion is a 50-year-old Australian, Rob Fahey, who beat a 32-year-old American called Camden Riviere in 2018.

Our teacher was Chris Chapman, world number three, who commenced our initiation. The principles of the game are the same, but the rules more complex, than lawn tennis. It is too difficult to explain in full here, but the court is larger, with various galleries, penthouses and obstacles with entertaining French names such as dedans or tambour, and there is a process called a hazard, where the receiver gets an opportunity to win.

Leaving aside the complexity, the main difference with lawn tennis is the racket and the ball. The rackets are wooden and heavier than in lawn tennis and the balls are handmade and stuffed by the club professionals. The balls bounce low and, rather than take a big swing at them, the intention is to make contact in the sweet spot of the highly-strung racket. This sends the ball zooming off at speed and I noticed it did indeed make a gratifying mocking sound, unless that was one of the watching tourists passing comment.

When we walked with mammoths…