Let us pray for an end to online lessons - Sophia Waugh 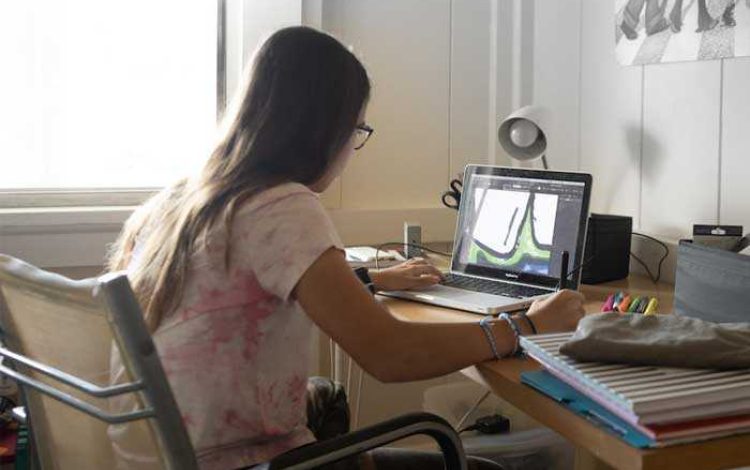 As a teacher, I am fuelled by the energy of my students and now I can't see them, says Sophia Waugh

What makes a school a school?

It is a classic question to ask students you are trying to make think before they speak. Is it the buildings? The students? The teachers?

If we swapped all our teachers with the teachers across the town, would we still be the same school?

Their unlined brows furrow and voices become shrill until someone says, ‘Miss, you’re making my brain hurt,’ and you know your job is done.

But now it’s my brow that’s furrowing. What is a school, in fact? Because, today, it isn’t anything I’ve ever known before.

Unlike in private schools, where the teachers and students see one another’s faces, our students are allowed to see only the PowerPoint on the screen. A job that was more about human interaction than any other job I have had is now solitary enough for St Simeon Stylites to have considered it a useful career change.

Before Christmas, when the Government was threatening to sue any school that closed, we hoped for the best.

But, on the last day of term, the head called an emergency meeting. He had not heard from the Government, he said, but the BBC was saying we couldn’t reopen after the holiday. Only Year 11 – the exam year – would be back in the first week.

We would take the first day of term to organise ourselves, and Year 11 would come back on the Tuesday, with the rest of the school the week after. We duly came back – only to be told that we were not reopening at all.

Not long after, we were told that exams were, after all, to be cancelled. It’s all a bit like the hokey cokey, but without the fun.

So what next? I am lucky in that my Year 11 is a top set, determined to do well. They turn up to the online lessons, ask questions and submit work.

But I still had to read them the riot act as the work became more and more sketchy. I would be awarding them GCSE grades, I told them, but I would not be giving them exams to sit. There would be a difference. The pressure on them is almost more than when they were expecting to sit exams. Every single piece of work will be part of my evidence for their grades. They cannot afford to slip up.

And neither can I. I hadn’t realised how much of the energy of teaching comes from the students. How much you pick up from a silence, a shift in body language or a raised eyebrow. You know which students need help before they ask – when you can see them. At the moment we are studying poetry but, with most of them shy and mute on the end of the line, they are being taught by lecture.

I’ve never been one for visual aids – asking students to make a plasticine model of the trenches so that they can understand Wilfred Owen – but this is going to the other extreme.

Meanwhile, my Year 10s – a second set – are being taught Jekyll and Hyde. I haven’t even had time to get to know them. >span class="s2">a student with COVID. By the time they came back, we had changed the settings (away from mixed-ability classes).

They were barely back in school before we closed again. If it is hard to teach children you know at a distance. It is immeasurably harder to teach children whose trust you have not yet gained, who haven’t yet become used to your ways.

So where next in this hokey cokey? We are beginning to be threatened with an even longer closure. More than anything in the world, the children need school.

But all we can do, from the top of our Stylites pillars, is pray.

Words and Stuff: The roly-poly raggle-taggle of ricochets

Bird of the Month, the Corncrake

The sad case of Jekyll and Hyde - Sophia Waugh

School Days: Don’t chop down the tree of knowledge