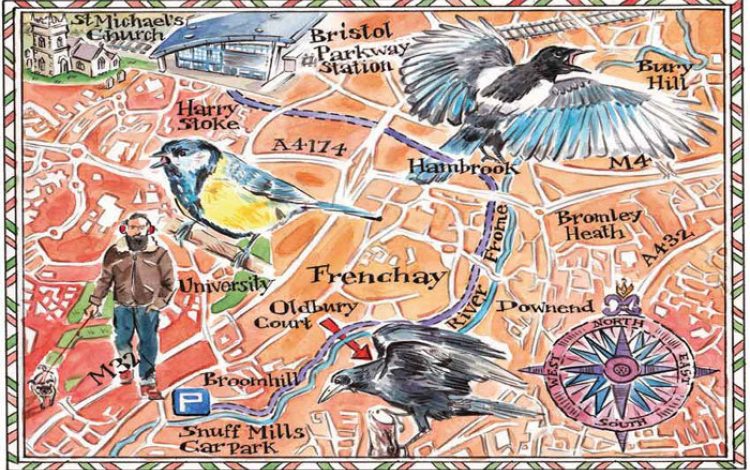 Slub. Gubber. Clodgy. There are more than 30 old dialect words for mud in Sussex alone. And, as a wet winter drew to a close, all of them also applied to western England.

I had dressed for a city walk – brown Chelsea boots – because I’d plotted a route across north Bristol. The Frome Valley Walkway is a path that sounds as if it might be suspended among the treetops. But almost every step involved a short slide in viscous, reddish soil that had been put through God’s liquidiser.

Our near ancestors spent half their lives knee-deep in mud when not living in houses built from it but, in the present era, even a moderate slathering is too much for most of us.

The mud indicated that people had recently tramped these paths, but there was no one about during my muddy midweek stroll. I began in suburbia, alighting at Bristol Parkway, where the station has swallowed Stoke Gifford, a commuter car park rampaging around the old village church. I headed through an empty housing estate called Harry Stoke –surely a 1950s footballer?

The only signs of life were the swoosh of passing cars and the occasional, mysterious, suburban errand: a woman climbed out of a sports car and walked down the street brandishing a cat basket and a large, pink-enveloped card. It felt like the dénouement of a short story.

I chose to access the Walkway via what the map called a Community Forest Path, which was less delightful than it sounded. I crossed wet meadows beside a stream that had turned the colour of fudge because of earth-moving for a fast-rising ‘collection’ – as the developers like to say – of new homes. (As if you buy a house the way you choose a chocolate from a selection box – or perhaps treat yourself to two.)

A great tit seesawed away but, within 500 yards of the M32, it was drowned out by the traffic. This became a blanket of noise that smothered all coherent thought. It abated in the underpass, but then I became irritated by the farmer who had annexed most of this tunnel for his machinery, corralling walkers into a narrow, barbed-wire-lined path as if we were recalcitrant cows.

Magpies cackled and the fudge stream quickened as the land sloped down to the Frome, a merry, chocolate-brown river which had carved a tree-lined sanctuary into the landscape. The Frome was full, yet obediently kept within its banks.

Entering the Walkway was like closing a padded door on an argument. It was beatifically calm to be encased in this narrow, damp valley of moss, ivy and ferns. A dual carriageway soared overhead, but its only impact on the peaceful world below was a brief explosion of litter blown from its heights.

Where the path diverted into a well-heeled cul-de-sac at Frenchay, Neighbourhood Watch stickers set me wondering about unsavoury characters.

The only lurker I disturbed was a thickset buzzard, which flew from the woods. There was a hint of colour in the trees, trunks and branches shining yellow, as if the lichens were limbering up for spring. Rooks assembled for parliaments over the water.

The tight valley became a miniature gorge, walls of stone rising, and I could see why this craggy, ferny, Romantic landscape attracted the attention of Humphry Repton, who designed many of the paths and vistas here for the Oldbury Court Estate.

There were more walkers now, urban hipsters with dogs and headphones, and the sun spilled into the gorge. It illuminated a pretty, riverine island, and the mud glinted with mischief and merriment. This was its last hurrah before spring. The mud was enjoying its hegemony while it lasted.

I walked south-east from Bristol Parkway and joined the Frome Valley Walkway just beyond Hambrook. It is six miles from Parkway to central Bristol, or three to Snuff Mills, where there is a car park. Buses can take you back to Temple Meads or Parkway