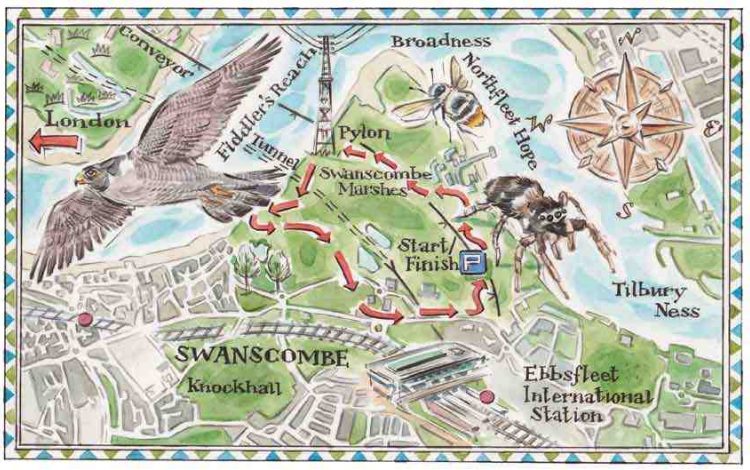 After the sleek glamour of High Speed 1, stepping beyond Ebbsfleet International railway station is like slipping into another century.

The roads are cramped between the old terraces of Swanscombe, and the route through an industrial estate is all ruts and puddles. Red double-deckers are doubled up beside a depot, the ‘wedding special’ not much called for these days. Pylons sail high overhead.

The Thames Marshes may be immortalised by Dickens in Great Expectations, and the estuary considered by some aficionados to be Britain’s version of the Mississippi Delta, spawning music from Dr Feelgood to numerous punk bands. But this flat, bleak, wet place is not much loved, except by psychogeographers.

So close to Europe’s biggest city, the Thames estuary has been useful, not scenic, and so is populated by petrochemical plants, power stations and warehouses.

Swanscombe Peninsula is an old cement works and landfill, and home to what is claimed to be the tallest electricity pylon in the country. This ‘brownfield’ land is a dollop of white space on the map but it is neither: it’s green.

Beyond a huge black-topped chimney, where the industrial estate peters out, there’s a bank. Over that, like a sigh of relief, the greenery takes over: reedbeds, grazing meadows and hawthorns still laden with blood-red berries.

Footpaths scurry through an intimate landscape of lumps, bumps and banks. In winter, greenery is mostly brownery but here is colour from the waifs, strays and weird species that have fallen off the back of a ship and seeded themselves: random clovers, brilliant-orange rosehips and diminutive yellow flowers I can’t name.

A Cetti’s warbler explodes with song as I pass his bushes. The peninsula has more breeding birds (82 species) than the celebrated Rainham Marshes.

It is difficult to read such a strange landscape, but its old names – Botany Marsh; Black Duck Marsh – reveal it was once salt marsh and grazing pasture. In 1825, it became home to the first cement works in Britain. Waste from the works and general rubbish was dumped on the site until the 1990s. Since then, the abandoned land has rewilded itself with scrubby birch, hawthorn and sallow woodland between warm glades of rubble, brambles and buddleia. All the dereliction specialists are here.

Ecologists call this ‘open mosaic habitat’ and it is surprisingly bounteous.

The charity Buglife has counted 1,992 species of invertebrate living here, including 250 species of conservation concern, more than on any other known site in the country. But no land this close to the capital can be abandoned for long, and the distinguished jumping spider, the shrill carder bee and the peninsula’s other rare residents are imperilled by ‘regeneration’: developers want to build a vast theme park called the London Resort, boasting hotels, restaurants and film studios. Glamour is on the march.

Perhaps thousands of trippers will tread here in five years’ time, but somehow I doubt it. I meet just two fellow walkers on a wet day, Eleanor Urquhart and Kim Smith, who during the pandemic have strolled from their nearby homes daily. They are ‘devastated’ by the proposals to turn this green peninsula into gleaming attractions (albeit with some marshland preserved and decorated with bird hides and walkways).

Industrial clangs soften into the far distance as I follow a disused road up another embankment where the grey Thames swims into view. The tall, blue cranes of Tilbury Docks rise to the north-east. To the west, lorries like flying beetles, high in the air, cross the span of the Queen Elizabeth II Bridge. Close by, the flats of Ingress Park, which was an earlier iteration of ‘regeneration’, have settled into the landscape rather nicely.

Before I circle around, I gaze up at the massive pylon. A peregrine falcon glides round its high seat, inspecting us and the feral pigeons that scut about in the dogwood.

So Swanscombe already does glamour – and spectacular species as well as small. It just does it quietly, in an unexpectedly thrilling and wild, green sanctuary.

Free parking on Botany Road, Swanscombe, beside the footpath, or a walk from Swanscombe or Ebbsfleet railway stations. There are numerous footpaths for a there-and-back walk or a loop around the peninsula. OS Map 162 Greenwich and Gravesend