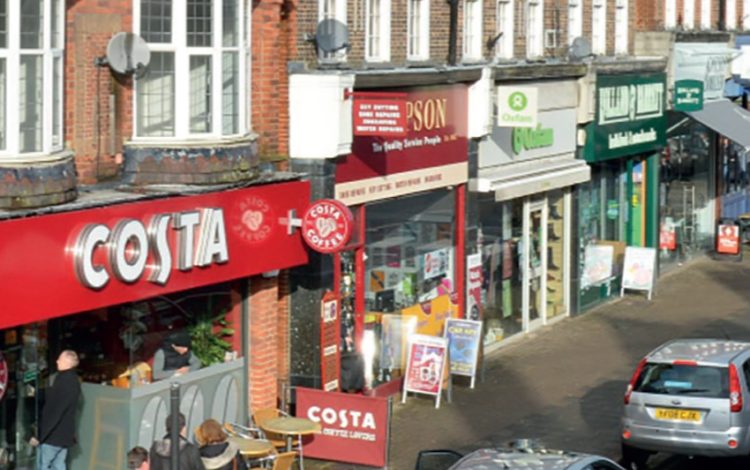 Last month I was back in my home town of Amersham and I noticed that the main shopping street, Sycamore Road, was doing something that it hadn’t done for years: bustling. Since the 1990s it had been dying a slow death from hairdressers, estate agents and charity shops, but now the streets were thronged with people. And where was the centre of the activity? A designer boutique? A pop-up seafood stall? A celebrity book signing? No, it was Marks & Spencer. The appearance of such boring high street stalwarts as M&S, Waitrose and Robert Dyas have reinvigorated the town.

Every so often there is a scare story in the papers about how all Britain’s high streets are beginning to look the same. In historic cities such as Cambridge and Gloucester more than ninety per cent of the high streets are chains. It is always so depressing to arrive somewhere new and find the usual Next, Greggs and WHSmith. My dream high street would consist of useful shops such as bakers, butchers, and greengrocers, mingled with places to browse, such as a gentlemen’s outfitter, a bookshop and a wine merchant, plus some cosy old-fashioned pubs. All of these would be independent family-run businesses staffed by people in it for the sheer love of cheese, for example, rather than desire to make money.

The problem is that towns without chains rarely look like this. They’re either too poor to attract chains so consist of kebab houses, tattoo parlours and ‘fancy goods’ shops that sell plastic colanders, or they look like Chipping Campden, a mixture of delicatessens and gift shops. The latter is great for tourists but not so good for local residents. The urban equivalent of the Cotswold tourist town is a gentrified district made up of clothes shops, bars and artisan coffee shops. When I lived in Shoreditch in east London, I remember the excitement amongst residents when a sign went up saying ‘A Butcher of Distinction’. Finally a useful shop, we thought, but instead it was another trendy clothes shop with the twist that the clothes were hung on meat hooks.

A common complaint about chain shops is that they make all towns look the same but most independent shops slavishly follow a look, too. If you go to gentrified seaside resorts in Norfolk or Suffolk, everything is painted in pale blue. In cities, independent coffee shops are always decked out in white tiles with a chalkboard on the wall. They do identical-looking sandwiches that sit on black slates on the counter. It’s a similar story in bars with their exposed light bulbs, brickwork and mismatched wooden furniture. They often stock the same craft beers and get their wines from the same distributor. The hipster bar/ restaurant look is now international. One can go to places in Budapest, Sydney or Buenos Aires that look identical to somewhere in Hackney or Brooklyn. I have a theory that there is a company based just outside Antwerp that supplies the complete hipster restaurant package right down to the ‘natural’ wines, pressed tin ceilings and jam jar glasses. The staff all look the same, too, with their beards, tattoos and check shirts. They might as well being wearing a uniform.

I’m not denying that some chains are dismal. WHSmith looks as if it’s in the middle of a closing-down sale. I get a headache the moment I walk into H&M. Chain pubs can be particularly sad, though I admit that I am sometimes partial to a pint of discount real ale at Wetherspoons. Some chains, though, are excellent. My wife, who is American, often points out how good British chain restaurants can be. Places like Polpo, Royal China and Byron offer consistently good food. It’s not just restaurants: any town that has a Gail’s, a Paperchase or an Oddbins should count itself lucky. Don’t forget that one person’s dismal chain could be another’s shopper’s paradise. When I was a teenager I would have killed for H&M in Amersham.

It’s anachronistic to complain about chains versus independents now because the real competition is online. It doesn’t matter whether your local bookshop is a Waterstones or an independent, they are both threatened by Amazon. The high street of the future is going to look very different to the one we are familiar with. As more retail moves online, it’ll be the shops that provide good service that will survive whether they are chains or independents.

Both can help each other. I can see a symbiotic relationship between shops when I visit Amersham. People might go into town for a new toaster at Robert Dyas, buy uniforms at Wheatleys, the long-established schools outfitter, and then have a coffee at one of the independent cafés. Without the big chains, the high street was dying. Now for the first time since the closure of the notorious Iron Horse, the pub my parents always warned me about going to, there is somewhere to get a pint in the town centre, a bar called the Metro Lounge (part of a small chain, naturally).

The revitalised Amersham isn’t exciting, it isn’t glamorous, it’s not going to pull the tourists in, but it is a useful place to shop, and provides employment. For local residents, a good chain-led high street is better than the alternatives: tattoo parlours and kebab shops or estate agents and hairdressers.

The Beatles and me