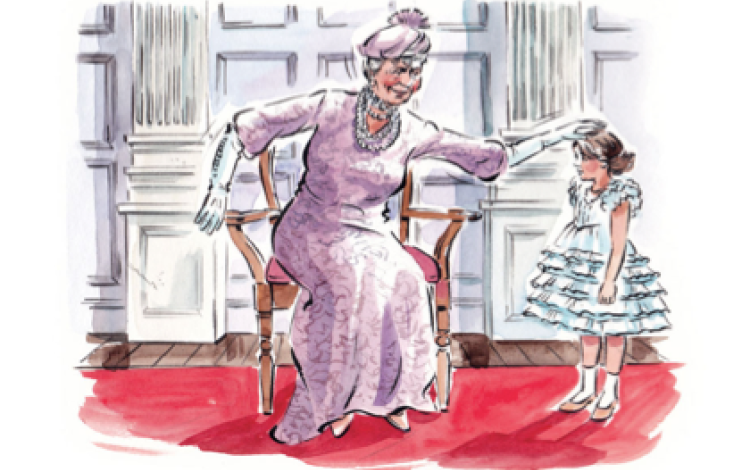 The subject of this book was a victim: of birth, circumstance, education (or sparseness thereof), romance, marriage, and her innate gaiety; but most all, of her stature.

Lifelong friends say that her diminutive size – far, far more than being number two, then three, then gradually further down-ranked – was what shaped her character.

Her grandmother Queen Mary teased her from earliest childhood. ‘Ach, you tiny little thing, I can hardly see you’, thus earning the tiny tsing’s undying enmity – and her stinging observation that ‘Anyway, she was Morganatic, not really royal.’ The opinion was often bruited throughout Mary’s queenship. A close member of Princess Margaret’s gang, Judy Montagu, heard a tiara’d old trout, gazing at a state portrait at Windsor, say, ‘Poor May, with her Morganatic hands.’

Even the most glamorous years, her twenties, of Princess Margaret’s film-star beauty, were marred by this lack of height; consistently remarked upon, initially with sympathy but later with cruel accuracy. It is no surprise that she was to develop a self-protective shell of aloofness. Contrary to royal blandness, she realised she had definite opinions and was going to voice them, and develop an aptitude for withering ripostes. Some unique, wayward gene seems to have been present in Princess Margaret’s make-up.

Throughout history, royal ladies’ sayings have been most memorable for their acid edge: the ‘Let them eat cake’ syndrome. Upstart Anne Boleyn was renowned for being ‘rude and arrogant’, Nell Gwynne impertinent, Wallis Simpson a trashy termagant. Queen Victoria (even shorter than Princess Margaret) instilled sheer dread in family and courtiers with her gimlet criticism.

It may be a cliché that smaller people are by nature aggressive, but it is only natural to find some way of holding one’s own. In millionaires and movie stars, it may be mildly amusing; in paupers, it was deemed merely mockable (‘Who does that little man think he is?’). In princesses, it comes over as hoity-toity.

And humour wasn’t prevalent in the family circle. Queen Mary had to prod her husband, when being told a joke, with her umbrella – ‘Now, Georgie’ – to extract the expected laugh. The Danish Court, Queen Alexandra’s family, would sit around a table, each member counting. At ten, they’d all peal with laughter and start again from one (Alexandra herself thought the point of golf was to stop balls going in the hole, which she guarded fiercely, bashing each out of shape with her club). If humour was frowned upon, worse still was Showing Off. Both these sins Princess Margaret possessed in spades; both encouraged by her adored and adoring father.

‘My Joy,’ he called her (her sister, ‘His Pride’) and, perhaps due to the King’s man-crush on his equerry Peter Townsend, she was to experience the first bitter blow her birthright had decreed. An unsuitable suitor. The Group Captain seems to have behaved very shoddily; married, with children, and already attracted by another woman when courting his princess – who was, at the outset, seventeen and second in line. His charade continued until the inevitable ‘mindful of my duty’ renouncement, though she kept his photograph at her bedside for decades to come. Small wonder, then, her outlook became more guarded, her attitude more jaded.

American glossiness, on hold during the war, held as much attraction for Princess Margaret as it had for her abdicated uncle David in the 1930s. By the 1950s, slang and slingbacks, nylons and nightclubs, Broadway musicals and ‘beat’ (the Princess owned a record, ‘Rock, Rock, Rock’, released many years before Bill Haley clocked in) crossed the Atlantic, along with a new humour. The deadpan wit of Mort Sahl and Lenny Bruce, and the ‘Insult Comics’ Henny Youngman and Don Rickles was a far cry from Freddie Lonsdale’s fluffy comedies or Lady Cunard’s epigrammatic dinners. Even Coward, intimate with the family, himself the masterclass in put-downs, seemed dated. Charming subtlety was being replaced by a more cutting edge.

Embracing all this novelty, and aided by the American ambassador’s daughter, Sharman Douglas, Princess Margaret dazzled amid a set of white-tied toffs – known as the Wallace Collection, due to a leading possible suitor’s name – though not one of them manned up enough to marry her, even if she’d have settled for such blinkered conventionality.

Inevitably, she met her match; someone she could give as bad as she got. For a while they played at being happy, but two eminently sensible children later, the match descended to opéra bouffe, now played to a jaw-dropped audience. One gets the impression that Roddy Llewellyn was the only man Princess Margaret truly, even selflessly, loved. There was no agenda in the romance for either, and her Marschallin-like acceptance of his marriage is genuinely moving, if yet another instance of her being a victim of circumstance, though not pomp.

But she was, after all, still the Queen’s sister. Fawners and the flattered flocked, surprised at not being fawned and flattered back, but at being given a dose of often contrary opinions and criticisms; quite a change from the usual royal ‘Have you come far?’ rigmarole. Each tart comment was grist to diarists, as was her now less svelte shape and, of course, lack of height. But godchildren and old friends swear she kept her youthful, if acerbic, humour and style. Newer ones, the writer Selina Hastings among them, found her knowledge of history and literature inspiring.

Craig Brown has brilliantly drawn together the component parts of a complex woman in these quizzical, far-researched, often very funny, often sad ‘glimpses’. His is an astute pen portrait of someone not only victim of herself, her role and her time, but of our – somewhat genteel – assumptions.

Charmed by a childhood with the princesses - Nicky Haslam