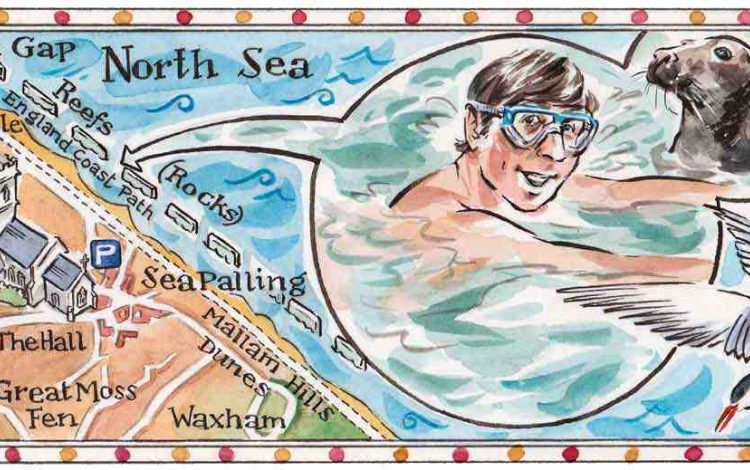 Patrick tests his mettle in the bronze North Sea

To celebrate summer, Taking a Walk is going for a swim in Norfolk instead.

Nothing delivers a more sustained sense of wellbeing than a long day’s walk. But, when a quicker fix is required, I don’t think anything beats a swim in cold water.

The silky caress of a cool river is seductive; the salty sea is something else. And each encounter with the same stretch of sea is completely different.

I could check a webcam but I like the roll of the dice that is a trip to the seaside. Though I live just 12 miles from the beach, on the coast itself the weather is often completely different. On this fine summer’s day, the sun shone until I came within a mile of the shore. Suddenly, tendrils of low cloud filled the sky, blown by an onshore wind. The horizon disappeared.

I parked behind tawny sand dunes at Sea Palling, where small birds chattered in hummocks of bramble and gorse. After I’d clambered up the dune between clumps of marram grass, the sea revealed itself.

It was calm, grey-green and irrefutably sinister, fading into nothingness within 100 yards of the shore.

For lovers of the peacock-mingled coves of Cornwall, or the vivid greens of the Irish Sea, the brown ‘German Ocean’ is an underwhelming sight. But the east coast’s waters have moved Maggi Hambling to create her superlative wave paintings. When once I asked her why she was inspired by the old, brown North Sea, she barked, ‘Bronze!’ at me. ‘When people say “brown” or “It’s all grey,” I say, “Go and look again – it’s full of colour,”’ she scolded.

Sea Palling was inundated by the great flood of 1953. Afterwards, an ugly, concrete sea wall was constructed to ‘hold the line’ formed by fragile sand dunes.

Landscapes are usually spoiled by our appetite for construction, but at Sea Palling an expensive human creation has infinitely improved the coast’s beauty and habitability. In the 1990s, granite was shipped from Norway and placed in nine reefs about 200 yards apart and 300 yards offshore. Behind and between each reef, beautiful, sandy bays have formed.

I stepped into the shallows of one bay with a frisson of fear. A friend once stepped on a poisonous stonefish while swimming along this coast. He somehow drove himself home to submerge his foot in boiling hot water (the remedy for the agony). In early summer, the water was still cold and my hands ached. I thought, as always, I couldn’t last more than a few seconds. Then I began swimming and forgot the chill.

I breaststroked across the bay into the murk in the style of the patron saint of ‘wild’ swimming Roger Deakin: crawl Testing my mettle in the bronze North Sea patrick barkham may be fast but only ‘frog’ gives you a frog’s-eye view of the world.

The salty water held me; so buoyant. The current gently moved me first one way, then another, compelling submission to a greater power. Not only were my cares rendered trivial by the immensity of the sea but I could picture them washing off my shoulders and away.

Screams above revealed themselves to be little terns: graceful, chalk-winged birds that have moved here since the reefs were built. These shallow bays provide rich fishing grounds. One tern rose, twizzled and then plummeted into the water, before whizzing past me, exultant, silver prize wriggling in yellow beak.

I assumed I was alone in the water today – the previous week, I’d admired two elderly ladies who floated in the chill for half an hour as if it was a warm spa. But when I clambered out after 20 minutes of bliss, I turned and a large male grey seal bobbed in the water behind me.

I imagined it waving me off with a despairing shake of the head. Why would any beast be foolish enough to stagger around on land when they can sail and fly in the life-giving water?