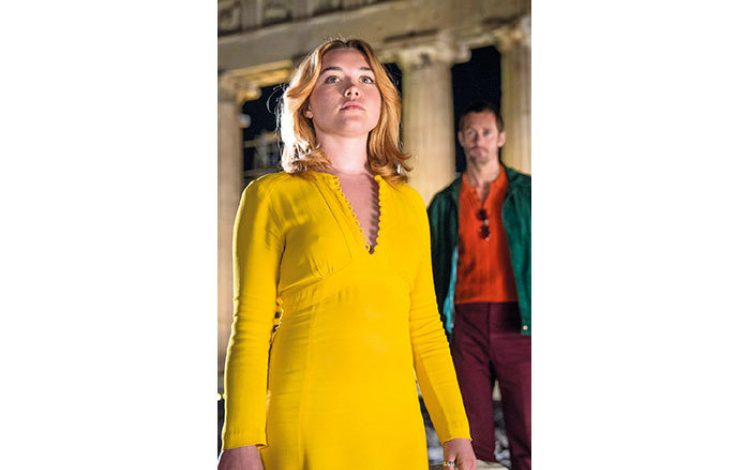 Not Smiley: Florence Pugh and Alexander Skarsgård in The Little Drummer Girl
View Full Size
1
of 1

Roger Lewis reviews The Little Drummer Girl, Inside No 9, Still Open All Hours and Foyle’s War

It’s a daft idea to trust an actress with a spy mission. Look at Dame Judi, when she was head of MI6. She thought you could run across a moor at dead of night waving a torch and not be seen.

I know that was in a Bond film, but the principle holds, and the premise of The Little Drummer Girl is exactly the same. A chunky actress called Charlie (‘a human sponge, me’) is deployed by Mossad to infiltrate a cell of Palestinian terrorists.

‘We are building a fiction, and our audience is everywhere, all the time,’ intoned the Israeli Smiley, a man who looked like someone in one of those funny disguises incorporating a big pair of spectacles, a plastic, bulbous nose and an implausible moustache.

The histrionic nature of espionage – concealed identities; counterfeit truths – was one thing. What truly held me were the period details, the décor and the clothes. The design department had obviously fallen in passionate love with the Seventies – brown and orange suits and ties, suitcases without little wheels, telephones with curly cables, cardboard folder files, teleprinters, avocado bathroom suites, and people smoking in cars that are unlocked with a bunch of keys. Is there anywhere more ancient-looking than the recent past?

There was also a slightly irritating in-joke, when John le Carré himself appeared on screen in the cameo role of a slow-moving Bavarian waiter. He was also a diner in the background in The Night Manager. If a trend has been set, when they remake Smiley’s People, I’ll expect the venerable novelist to don a wimple and play the nun looking after Karla’s mad daughter in the asylum – a role taken in a previous television version by Rosalie Crutchley.

Plaudits attended the ‘live’ broadcast of Inside No 9. It started off promisingly – a mobile phone found in a graveyard; the dead leaving messages – but then it became meaninglessly tricksy. There was a faked break in the transmission, a screaming continuity announcer and alleged technical faults. The idea was that the studio was haunted, because it was built on top of a Victorian graveyard. I am sure it all looked clever on paper. In actuality it never got going, though Stephanie Cole was to be glimpsed, cutting her own throat in the green room.

Stephanie is in Still Open All Hours, where she wears a fur hat and is the sort of Northern battle-axe who still thinks a tin of spaghetti hoops is foreign muck. I absolutely hate this programme, which certainly deserves to be visited by the vengeful ghost of Ronnie Barker. The performances are all delivered in an antique sitcom style, with this insistent, exaggerated delivery of unfunny lines – as if we are being pinned against a wall and compelled to acknowledge that this is terrifically humorous. David Jason is particularly guilty of a strange, slowed-up, artificial mode of deliberative enunciation. It is sad to see Johnny Vegas, of whom I once had high hopes, doing nothing except look startled.

When I lived in Rochester, every other film and broadcast was made on location thereabouts, especially in the Chatham Dockyard. Now I am in Hastings, I recognise the streets and alleys in Foyle’s War, which is always on ITV3, my favourite channel. Michael Kitchen’s detective superintendent has his work cut out chasing blackmailers, fifth columnists, poisoners and Nazi spies around my new neighbourhood. But golly heck, what a mannered piece of acting. Kitchen, clad in a hat too large for his head and a flapping British Warm three sizes too big, chews the inside of his mouth, twitches his lip, sneers, sniffs, elongates words at random, and does his utmost to make Foyle come across as harsh and ironic.

‘Don’t lie to me; tell me what you know,’ he snaps, getting the other fellow to explain the plot for us. ‘Do beg your pardon. I should have knocked,’ he says – not being apologetic at all.

The English seaside in wartime always puts me in mind of Captain Mainwaring’s Walmington, however, and I fully expect Corporal Jones’s meat van to trundle into shot. Whether this means my disbelief is suspended willingly or unwillingly is not something I have ever completely understood.