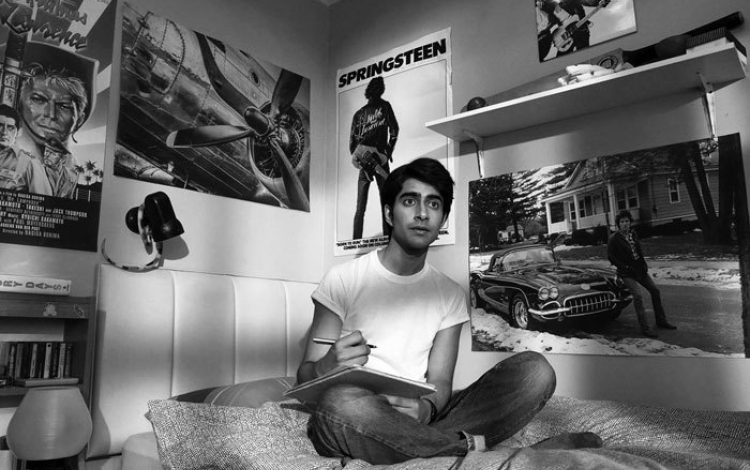 Blinded by the Light (12A) is just a poor man's Mamma Mia!, says Harry Mount

First it was mocked by Lorraine Chase in the 1977 Campari advertisement.

‘Were you truly wafted here from paradise?’ a posh smoothie in a white suit asks her.

And now Luton is portrayed as the world’s worst dump in Blinded by the Light – the film based on journalist Sarfraz Manzoor’s 2007 memoir, Greetings from Bury Park.

Manzoor co-wrote the screenplay of this story of his younger self, a bright boy dreaming of escape from Luton – and the expectations of a professional career foisted on him by his Pakistan-born father, a factory worker in a car plant.

Manzoor’s childhood dreams were intensified by his obsession with Bruce Springsteen – whose songs of love, loss and hopelessness in blue-collar New Jersey chime with Manzoor’s desperation in industrial Bedfordshire; a desperation deepened by a virulent National Front movement. Springsteen’s stirring songs provide the soundtrack for the film.

Everything’s in place, then, for a compelling tale of Race, Religion, Rock ’n’ Roll (the subtitle of Manzoor’s book) in 1980s Britain. This could have been the real-life Billy Elliot, another moving story of an artist leaping out of a disadvantaged background. But it fails to launch.

The problem is largely Viveik Kalra, the actor who plays Javed, the Sarfraz Manzoor character. He has to carry the whole film on his slight shoulders, and they’re not up to the burden. He says his lines flatly as if he’s reading directly from a script. He needs buckets of pathos-inducing charm to get across the lovelorn emotions of a nerdy smalltown boy wanting to make it beyond the confines of poor old Luton – but the buckets are empty.

In one scene, Javed manages to break into his school’s radio studio and substitute a Springsteen song for the normal diet of 1980s pop in the school corridor. When Tim Robbins pulls off the same trick in The Shawshank Redemption, taking over the prison governor’s record-player – getting all the prisoners to hear a Mozart aria – you reach for your hankie to wipe away the tears. Here you use it to cover your eyes to avoid yet more awkward am-dram.

There are compensations. Kulvinder Ghir as Malik, the boy’s father, can bring on the pathos as the paterfamilias brought low by unemployment and his desperation to improve his family’s lot. And there’s a gifted cameo from Rob Brydon as a happy-go-lucky, cheeky chappie on the local Luton market stall, sporting a heroic 1980s mullet.

Manzoor and the film’s director, Gurinder Chadha, could have got much more mileage out of the decade that style forgot. Instead, they go in for tired political commentary (‘We don’t want that witch winning a fourth election’), awkwardly shoehorning in shots of John Humphrys reading the news and Michael Fish failing to predict the great storm of 1987.

And then it all morphs into a poor man’s Mamma Mia! The scenes where the cast break into Springsteen songs on the streets of Luton – cue a dancing tramp and lip-synching market traders – are embarrassingly reminiscent of Mike Myers prancing down Carnaby Street in Austin Powers: International Man of Mystery.

The film never works out whether it’s a real-life coming-of-age drama or a feel-good musical. It ends up being neither.

After years of reviewing trashy movies, the late Pauline Kael, the New Yorker’s film critic from 1968 to 1991, said she longed for the truth of non-fiction, unimpeded by the clichéd plot turns of directors and screenwriters. The same applies here. If you’ve got a really good true story, why pour in the schlocky, emotion-tugging devices of mass-market films?