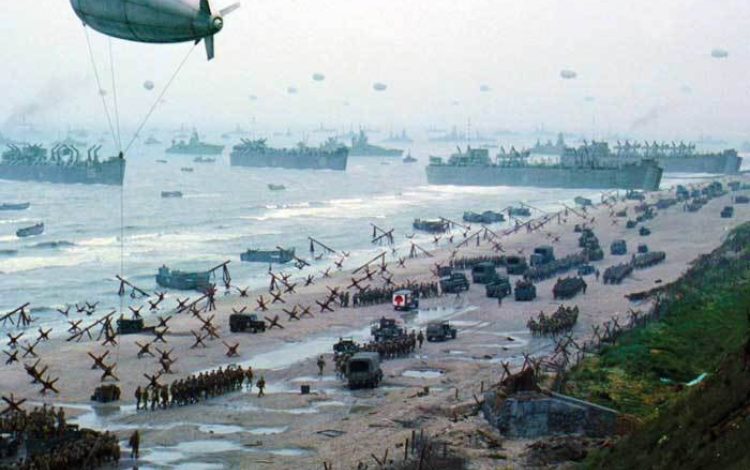 The greatest seaborne invasion in history took place 76 years ago on June 6, 1944. Giles Milton tells the story of D-Day, hour by hour, through the soldiers’ eyes

It had been raining for much of the day and the air was still damp when Wally Parr, 21, clambered into the glider that would take him to Normandy. It was 10.35pm on 5th June 1944, and Parr’s nerves were on edge – with good reason. He had been selected for an audacious airborne operation that was to take place some six hours before the D-Day beach landings in Normandy.

Parr, serving with the Ox and Bucks Light Infantry, and his 181 comrades had to seize two strategically vital bridges at the villages of Ranville and Bénouville. If they failed, D-Day itself would be at risk of failure. Hitler’s SS panzer divisions would be able to sweep across the two bridges and drive the newly landed troops back into the sea.

‘Link arms!’ shouted the pilot as the Horsa glider swooped through the clouds towards Normandy. Parr felt a hideous crash as the plane hit the ground: the landing was so rough that he was knocked unconscious, along with all his comrades. It was several minutes before they came to and glimpsed the bridge through the glider’s portholes. The German defenders were still in bed, unaware the gliders had just landed.

‘Charlie, get out!’ shouted Parr to his buddy, Charles Gardner.

Parr and Gardner were the first to reach the bridge and they did so in a welter of machine-gun fire. ‘Come out and fight, you square-headed bastards!’ shouted Parr. He and Gardner worked as a highly dangerous double act, pitching grenades into the German dugouts. Both knew that it was kill-or-be-killed.

There was one British fatality during that nocturnal operation: young Den Brotheridge was gunned down on the bridge. But there was good news to accompany the bad. As Parr and company reached the far side of the bridge, the German defenders ran for their lives. Bénouville Bridge – later renamed Pegasus – was in Allied hands.

There was soon further good news. Ranville Bridge had also been captured. Now Howard’s men had to hold on to these bridges until noon, when British commandos were due to relieve them.

Those commandos were among the 156,000 soldiers crossing the English Channel that night, destined for the five designated landing beaches: Utah, Omaha, Gold, Juno and Sword. The Channel crossing was not for the faint-hearted. The sea was so choppy that men vomited up the meat stew they’d eaten before leaving England.

The commandos landed at 8.40am, led by flamboyant Scottish aristocrat Lord Lovat, who had the chutzpah to go into battle with Bill Millin, his personal bagpiper, at his side. (Millin is on this issue’s cover, in the right foreground. Lovat is in the centre, in the water.)

Men bellowed orders – ‘Stand by the ramps! Lower away there!’ – as the landing craft crunched into the gravel at Sword Beach. Lovat led the commandos ashore under withering machinegun fire from the German defenders.

Lovat’s piper blasted out Road to the Isles as his men advanced through shellfire and shrapnel. ‘They moved like a knife through enemy butter,’ said Lovat with relish.

Among those in the vanguard were Stan ‘Scotty’ Scott, a chippy London bruiser, and his No. 3 Troop; they were determined to be first to reach Howard’s beleaguered men at the bridges. They advanced inland on bicycles, passing a wounded British paratrooper en route. ‘Where the f*** have you been?’ he asked. He knew that the men at the bridges had been engaged in a desperate six-hour struggle against the Germans.

As Scott and his men approached Bénouville, the firefight intensified. ‘Rounds hitting from all sides,’ said Scott. ‘Campbell was the unlucky one. He got hit through the neck and fell down in one big lump – him, the bike, and all that.’ It was just after midday when Lord Lovat arrived with the main body of commandos. He was so cool under pressure that the scene would later be immortalised in the Hollywood movie The Longest Day (1962). Lovat shook Howard warmly by the hand and apologised for being two and a half minutes late.

All along the Normandy coast, men had been charging ashore since dawn. On Utah beach, American troops had moved swiftly inland and linked up with airborne troops dropped into Sainte-Mère-Église. On Gold and Juno, British and Canadian forces were also thrusting inland.

Omaha alone hung in the balance. The German defenders were both tenacious and well-organised and had turned the six-mile stretch of beach into a bloodbath. Hundreds of young men were gunned down before they even reached the shoreline.

Gold Beach was witness to a particularly remarkable feat of arms that morning. Stanley Hollis was a 6ft 2in bruiser, built of sinew and muscle. His men were charged with capturing Mont Fleury Battery, a near-impregnable stack of concrete casements. Mont Fleury was soon in Allied hands and Hollis had just won the first of his two nominations that day for the Victoria Cross.

By late afternoon, troops were advancing inland from all five beaches. Even bloody Omaha was eventually captured and the weary survivors began pushing their way through the clifftop villages.

The military objectives for D-Day were incredibly ambitious. If all had gone to plan, the liberated zone would have covered 50 miles of Normandy coast and included four of the landing beaches (Omaha, Gold, Juno and Sword).

The cities of Bayeux and Caen were also meant to have been captured. A further liberated zone was to have stretched inland from Utah beach, encompassing Sainte-Mère-Église and nearby villages.

The reality was somewhat different: the Allies clung to four separate beachheads that were both isolated and vulnerable. They were surrounded by enemy positions, and had failed to dislodge the Germans from either Bayeux or Caen. On the plus side, Allied casualties were lighter than expected: they numbered some 11,000. The German toll of dead and injured remains unknown.

Although the beachhead was small, it enabled the Allies to pour in huge quantities of men and machines over the following days. By the end of June, 850,000 men, 148,000 vehicles and 570,000 tons of supplies had been landed in Normandy. Five days after that, the number of troops would top one million.

Normandy is bracing itself for a new invasion for the 75th anniversary. This time, it will be tourists and veterans arriving in huge numbers. D-Day left its mark on the landscape and there is a lot to see: not just the shattered strongpoints and coastal defences, but dozens of excellent museums.

The exploits of Wally Parr and his men can be relived at the Pegasus Bridge museum, while Utah Beach has a superbly appointed museum dedicated to the American landings. Another draw is the ever-expanding Airborne Museum at Sainte-Mère-Église.

Among the key British objectives on D-Day was the Merville Battery, a veritable time capsule of a museum in which special lighting, smell-diffusers and dramatic sound effects are used to recreate the terrifying experience of the assault on the battery. Another must-see sight is the D-Day Museum in Arromanches, which tells the story of the two floating Mulberry harbours that were towed across the channel from England.

Soon there will be a new monument to visit. On an imposing site overlooking Gold Beach, a large memorial is being constructed to honour the 22,000 British soldiers, sailors, marines and airmen who lost their lives between D-Day and 31st August 1944, when the Normandy campaign officially concluded.

It will be a fitting memorial to those who served – and fell – in the greatest seaborne invasion in the history of warfare.

Benedict King - What is a galliard?