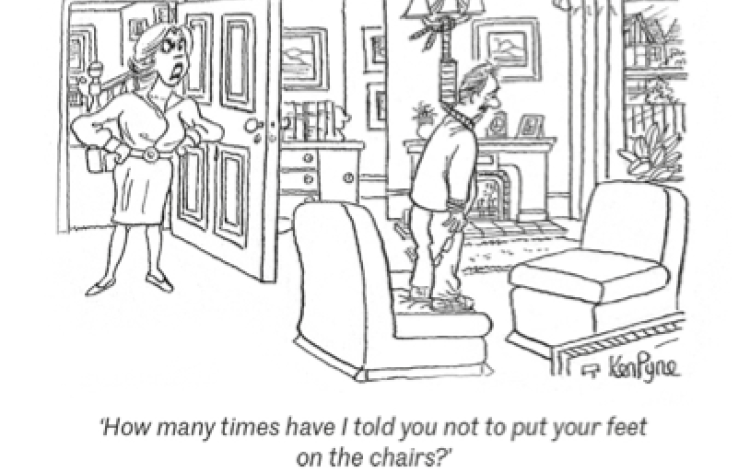 No moaning to listen to, no arguments and no mismatched toothbrushes – it’s the best way to be, says Liz Hodgkinson

Nearly eight million people in the UK live alone – that’s one in every 3.5 households – and I’m one of them. In fact, I have been one of them for nearly thirty years.

It wasn’t exactly intended. When my husband and I separated in 1988 – after he joined the Brahma Kumaris religious movement – I initially revelled in the deep peace and endless quiet of being on my own. I did not envisage it being a life sentence.

I found it strange and scary at first, having always previously lived with other people. But, as the months and years went by, it became impossible to imagine sharing my space with anybody ever again. I came to enjoy being the sole mistress of my domain, with nobody to interfere or tell me what to do.

Looking back, aged 73, I can highly recommend it and would say that the upsides far, far outweigh the downsides. As one single, fifty-year-old friend remarked, ‘There are no downsides to living alone. It’s all upsides.’

Living alone is a relatively new phenomenon but it is growing all the time; the number of single households has gone up by 23 per cent in the past decade. Few people lived alone in Victorian times. The trend really only gathered pace after 1945, when bed-sitting rooms were created for men coming back from the war. Then, in the 1960s, blocks of self-contained ‘bachelor flats’, or studio flats, began to be built, for single occupation only.

Hardly any women lived alone in the past. They had no means of supporting themselves; widows often had to remarry in haste for sheer survival. As more people – women as well as men – can afford to live alone, increasingly they are enjoying the luxury of the solitary life.

You can watch the television programmes you want to watch, listen to the music you want to listen to. You can have the décor, the artwork and books that are your choice alone, and tidiness levels are ones that you alone create. You never come home to find somebody else’s mess littering the floor or somebody else’s socks in the laundry basket.

Best of all, you will never have to share a bathroom. The toilet seat is never left up, and there is no one else’s shaving gear around. Everything in my home is colour co-ordinated – so I don’t have to worry about the wrong colour toothbrush taking up residence in my bathroom.

All the clothes in the wardrobe are mine. I don’t have to squash my things up to make room for somebody else’s suits or huge shoes. I never have to listen to tales of somebody else’s awful day at work and there is nobody to argue with.

When I come back from a day out, my kitchen is as tidy as I left it. As one lone friend said, ‘I couldn’t stand it if I came home from work to find somebody had made themselves a sandwich and left crumbs all over the counters.’

I have become surprisingly competent at jobs that I would leave to a man if I had one, such as seeing to the car and doing DIY and IT. I have a range of spanners, screwdrivers and hammers in my tool room; I now know the difference between a Phillips and a flat screwdriver. I can even put oil in the car. With jobs I cannot do myself, I call in a handyman. I do not have to put up – as I did in my married days – with total incompetence masquerading as expertise.

Nowadays, just about everything can be delivered to your door, including gourmet meals. There is no need to do any cooking, and you can hire cleaners in just about every guise, from dailies to once-in-a-while deep cleaners. All services are available via the internet. When my boiler broke down the other week, I logged onto Google and got step-by-step instructions.

You are responsible for all bills, but this forces you to become an efficient financial manager. When on your own, you learn to live within your means because there is nobody to bail you out.

Although I live alone, I am rarely lonely. True, I have to devise my own entertainment and there is not a handy companion for the theatre, cinema or a concert. I have also got used to eating out on my own.

My solitary existence is enlivened or, should I say, interrupted, by visits from my two sons, Tom and Will, and my five grandchildren, aged 12 to 17. Because they are in London and I am in Oxford, their visits are relatively rare. Still, the grandchildren’s youth and liveliness do stop me getting too cranky and tetchy.

With so many pluses, are there any downsides? Just a few. If I am ill, there is nobody to look after me or take me to hospital. I sometimes fantasise that, if I died, it could be several weeks before anybody might miss me.

But a bigger downside is that gradually, almost imperceptibly, you become eccentric, establishing bizarre rituals. I have to have my first glass of wine at 5.40pm precisely, timed to the minute. All my tins have to face the same way round, and my books have to be stacked and arranged with military precision. I know I would be more relaxed with somebody else living in the house. And I do talk to myself.

There is a particular minus for women. There is nobody to police your appearance; so you can go out with lipstick on your teeth, your skirt tucked into your knickers or your eye make-up smudged.

But these factors are a small price to pay for the absolute blissikins of being able to pull up the drawbridge to your very own domicile.

Back to university - at 62 - Nicola Foote

The dark side of Radio One