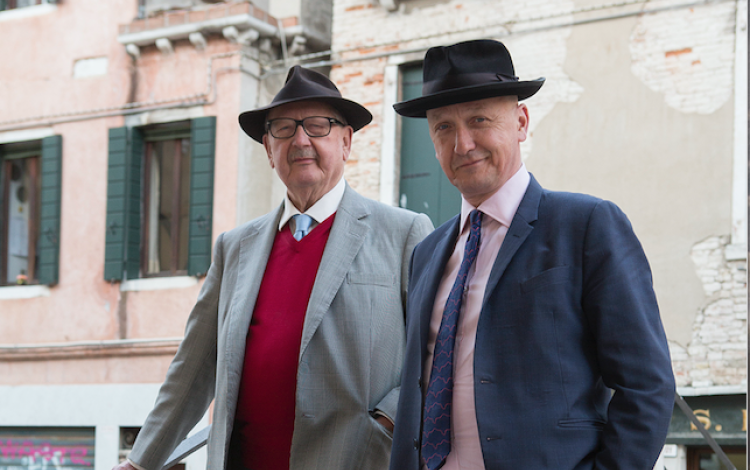 In the Sixties, a Kent teacher set up one of the world’s finest cultural education experiences, a crash course in civilisation. He now runs it with his son. Charlotte Metcalf meets them

In late January, a group of some thirty-five young people from around the world will gather in Venice. It will be the fifty-third year of the residential John Hall Venice Course, offering daily lectures on everything from art and architecture to global politics and the Middle East.

The course has been described as ‘a crash course in world civilisation’. One parent has talked of sending off a grumpy, grunting adolescent and getting back a cultured, opinionated, articulate young man.

John Hall, who chucked in a career as a schoolteacher in Kent to found the course, is now eighty-five. Like his course, he is old but thriving. Charlie, John’s son (a fledgling oldie himself at fifty-seven) now mainly runs the course. John is still there for the duration, though he doesn’t do presentations any more because he forgets his words. ‘I have to use little triggers to remind me of the word I’m searching for,’ he chuckles. ‘Even the word “dementia” is hard enough to remember, but I think of demon and then I get there. Otherwise, I’m absolutely bursting with intellectual energy.’

John is as effervescent as he was when he set off with his first batch of students in 1965. ‘Back then, they arrived by train, all wearing tweed jackets and flannel trousers,’ John remembers. ‘Just two years later, they were turning up all Strawberry Fields and The Beatles, breaking out from school and into freedom with new attitudes. That was a fantastic year and especially good fun.’

The course was originally conceived for Oxbridge students who needed something to do in the months that followed seventh term exams. Back then it was called the Contemporary Europe pre-University Course for Oxbridge students, and dealt mainly with politics, economics, social history, philosophy and psychology. Gradually, meeting student demand, it incorporated more art.

Art remains at the course’s core but, John explains, ‘We have kept in of-the-moment issues like terrorism and political upheaval, climate change, the roots of the Arab Spring and relevant science like the astrophysical scale of the universe, space and time.’

Some may pooh-pooh John Hall for his old-fashioned approach to education, suggesting that gap year pupils don’t want to spend hours confined to lecture halls. Yet John and Charlie are unapologetic for their uncompromising stand on academic rigour. ‘Parents spend far too much money sending their kids on gap years, to get off their faces at full moon parties in Thailand or backpack round the Outback or Latin America,’ says Charlie. ‘What’s the point? It’s more necessary than ever in this sleek, business-orientated world to learn to appreciate art and beauty. Who else is going to fall in love with our great European cities and sustain them for future generations?’

Students might balk at the crammed timetable but once there, John says they’re irresistibly drawn in: ‘However late they went to bed, they do turn up at lectures and are interested because when you’ve got them captured in such an enjoyable situation. They might have regarded opera as contemptible before they arrived but, after a lecture or two, they’re downloading Puccini or emailing their parents and asking them to buy Mozart CDs.’

This may explain why the course is reassuringly expensive, at just shy of £10,000 for six weeks in Venice, preceded by a week in London. Two extra optional weeks in Florence and Rome are also offered — for a price. The price may be hefty but being a John Hall Alumnus is tantamount to life membership of the establishment élite.

The list of ‘John Hallers’ reads like a potted guide to Britain’s aristocracy – Armstrong-Jones, Asquith, Bowes-Lyon, Cawdor, Douglas-Home, Fiennes, FitzRoy, Guinness, Hesketh, Moncreiffe, Pleydell-Bouverie, Sainsbury, Somerset, Villiers. Yet the course has also contributed to the cultural education of creative business moguls like Peter Bennett-Jones and Cath Kidston and many a high court judge or high-profile journalist too.

From early on, John began receiving requests from parents to join the course, inspired by the lecturers and also the extraordinary access that John has negotiated over the years. Students take sole possession of the magnificent church of San Marco for an evening and are treated to a memorable private display that involves sitting in the dark and slowly having the gold mosaics lit and revealed. Envious of their children, parents wanted John to replicate that feeling of being a Venice ‘insider’.

He started allowing parents to attend some lectures, but parents pushed for more. So, in 1974, he set up John Hall Italian Journeys, aimed at oldies and other grown-ups, offering ‘culture & conviviality in beautiful surroundings’.

John himself lives in Le Marche in central Italy with his wife, where they cultivate olives and wine. His love of his adopted country remains almost childlike in its intensity. He profoundly believes that experiencing Italy is an essential step towards understanding and enjoying life.

‘We’re not just about art history,’ he says of both his ventures, ‘We’re about the art of life itself.’

‘Charlie and I get on very well together,’ says John. ‘Unlike me, Charlie has the gift of the gab; so he happily takes over in Venice, making all the announcements and introducing lecturers, which I used to do and he gives a few lectures of his own now. Now I sit at my desk at the back of the lecture room, watching and listening. I still consider my presence of some value and I value keeping in touch with the students.’

John and Charlie know not to tamper too much with a formula that has stood the test of time. A few years ago, the course was shortened but, due to student demand, it was lengthened again.

‘We will not bow to the fashion for quick, lazy fixes,’ resolves John. ‘There’s far too much rushing around on other courses. We want our students to build a real, lasting relationship with Venice and nothing shorter or less academic will do for us. We know our standard is gold and we’re never going to compromise on quality. That way we hope to keep going another fifty years at least.’

I Once Met: Bob Marley