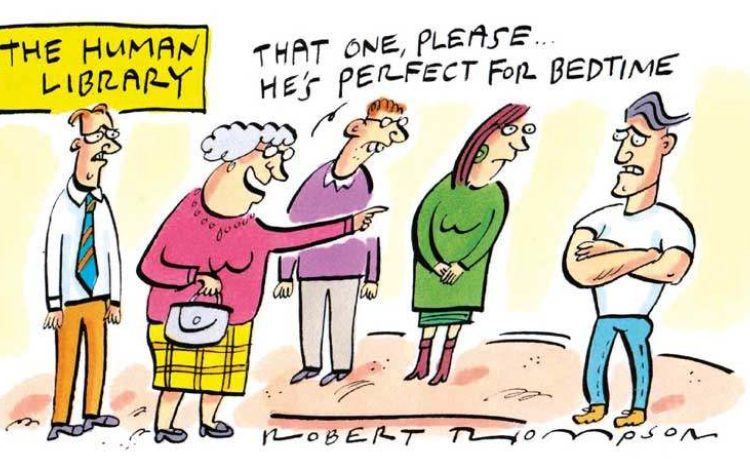 Don't judge a human book by its cover

At the Human Library in Copenhagen, you don’t borrow books; you borrow real people.

It all started on a sunny June day in 2000. On a small patch of grass at a local music festival, participants were invited to borrow a person as an ‘open book’. More than 50 people – among them a journalist, fans of rival football clubs Brøndby and FC Copenhagen, a policeman, a parking officer and Bente Moren, a woman from Freetown Christiania in Copenhagen – were ‘published’.

The Danish idea was – and still is – to challenge prejudice and stereotypes. Volunteers sign up to be a ‘human book’ and offer topics that they are happy to talk about with honesty. People can then borrow a human book from the library for half an hour or more. The human book tells its story, presents its points of view and answers questions.

The Human Library has grown from presenting ‘books’ at local Danish events to appearances all over the world. Ronni Abergel, the founder of the library, has seen how it has evolved from a pop-up to a movement in more than 80 countries.

‘The idea is fairly simple. We arrange for people to meet and talk in a safe and secure environment. That has proven to be a useful and effective method for allowing people to get to know about each other through conversation,’ he says.

‘All people judge, and we are not here to change your mind or to tell you not to judge,’ says Ronni. ‘We are here to make information available in a safe setting so you can make your own decisions, but hopefully better-informed decisions. Based not on a quick judgement, but after more careful consideration and after meeting someone who knows about it. It gives you a chance to unjudge someone.’

The Human Library recently celebrated its 20th birthday. ‘Sharing stories is what binds people together, and you can see the effect straight away. People walk away with a broader perspective and a more open mind,’ says Rianneke Tijsse Klasen, who has gone on loan to talk about often stigmatised issues, such as abortion and polyamory.

‘The Human Library attracts really incredible people, people with big hearts and a drive to make the world a better place,’ says Ben Caron, who manages the Human Library outpost in Los Angeles. ‘I believe that what the world needs most now are compassion and empathy, and this seems to me one of the most effective projects to help build those.’

Bente from Christiania – a bohemian commune in Copenhagen – has met many different people through the Human Library over the years. She recalls schoolchildren who visited shortly after the library first got going. ‘Some of the children saw people from Christiania as thieves and addicts, and I realised, “Wow, what a difference we could make as books.”’

Twenty years later, she still occasionally takes part. ‘It is still as important now as ever to challenge prejudice, to demystify and to talk to one another.’

What was speedway? Roddy McDougall

Money Matters: What to do when the taxman cometh