When we walked with mammoths… 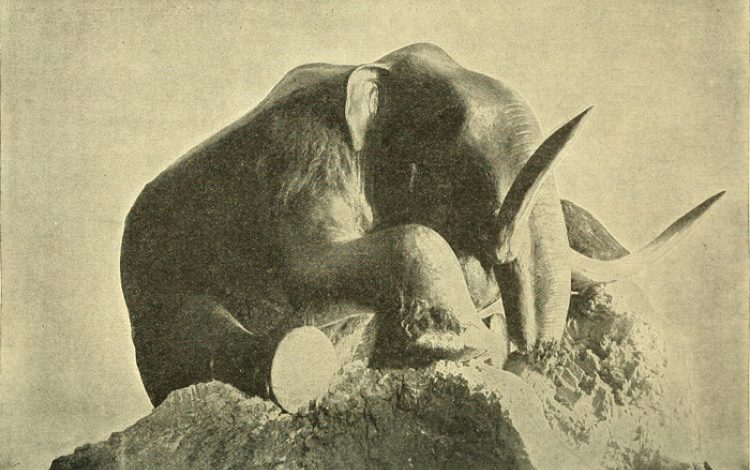 As the remains of the last mammoths, which died only 4,000 years ago, are discovered by scientists on a remote island north of Siberia, James Le Fanu praises the mighty beasts

When modern humans first arrived in Britain 35,000 or so years ago, the local fauna they would have encountered were a fearsome lot: mega-sized bears, bone-crunching hyenas, lions and rhinoceroses, the sabre-toothed cat and the ‘Irish’ elk crowned with an epic pair of antlers the width of a cricket pitch from tip to tip.

Most impressive of all was the mighty (and hairy) mammoth: 12ft high, six tons in weight, with its dome-shaped skull, 16ft curved tusks and compact body supported by legs the size of tree trunks. The mammoth’s physical resemblance to today’s elephants is obvious enough, but our acquaintance with their long extinct, distantly related predecessors is unique in two special ways.

We know more about the mammoth than any other prehistoric animal because not just its bones and tusks but its fleshy body parts – skin, trunk, muscles and internal organs – have been preserved for aeons in the Serbian permafrost, awaiting scientific study. More significantly still, the many images of the mammoth bequeathed by our ‘primitive’ ancestors, and indicative of their coexistence, provide the most compelling evidence of their truly remarkable, almost inconceivably so, artistic sensibility.

The first intimation of that sensibility came in 1823 when the brilliant, if eccentric, Oxford palaeontologist, William Buckland, learned of the chance finding of a mammoth’s skull and tusks in a cave at Paviland, on the south coast of the Gower Peninsula. The cave proved to be a treasure trove of the remains of prehistoric creatures, with an abundance of bones and teeth of rhinoceros, bear, hyena and others.

‘In another part,’ he wrote, ‘I found beneath a shallow covering of six inches of earth, nearly the entire left side of a human female skeleton stained a deep red colour.’ Scattered among her bones he retrieved a couple of handfuls of periwinkle shells, each pierced with a tiny hole so that they could be strung into a necklace, along with fragments of ivory rings and rods.

For the devout Buckland, committed to reconciling his palaeontological findings with the Biblical account of creation, this woman could scarcely have been coeval with the remains of those prehistoric animals in close proximity. He speculated the Red Lady of Paviland (as she would become known) had perhaps been a camp follower to a nearby Roman fort, plying her trade in that inhospitable, bone-strewn cave. His imaginative inference proved incorrect on two counts. The Red Lady, on closer scrutiny, turned out to be a man, who carbon-dating would subsequently reveal had perished 30,000 years before the Roman conquest of Britain.

It would be another four decades before the most sensational, in its implications, of all palaeontological discoveries would confirm – and in the most unequivocal way possible – both the antiquity of modern man and his cultural achievement. In 1864, French archaeologist Edouard Lartet came across five fragments of a mammoth’s tusk that, pieced together, revealed a beautifully realised etching of the animal itself, complete with its shaggy mane.

Lartet’s engraved mammoth heralded a gold rush of similar astonishing findings: both ‘portable’ art fashioned from ivory and antler and the distinctly ‘non-portable’ dramatic frescoes covering the interiors of Stone Age man’s cavernous cathedrals. Most compelling of all is the vast diorama of diverse species on a wall of the Chauvet Cave in southern France: two male rhinoceroses with their horns locked in conflict; lions stampeding a herd of bison; reindeer, wild horses and, apart from the throng, a couple of mammoths standing placidly side by side.

The Palaeolithic civilisation that created these masterpieces endured for an incredible 25,000 years until, inexplicably, in around 10,000 BC most of the species so vividly portrayed vanished from Europe, almost in the twinkling of an eye. The mammoth endured, retreating ever farther northward, its final resting place in the frozen wastes of northern Siberia being dated to the time of the Middle Kingdom of the Pharaohs.

It endures still, to be admired in all its magnificence, in the Zoological Institute in St Petersburg, where the Berezovka mammoth, extracted intact from the Serbian permafrost, is on permanent display – complete with its penis that was found to be ‘completed extended’, 3ft long and half a foot in diameter.