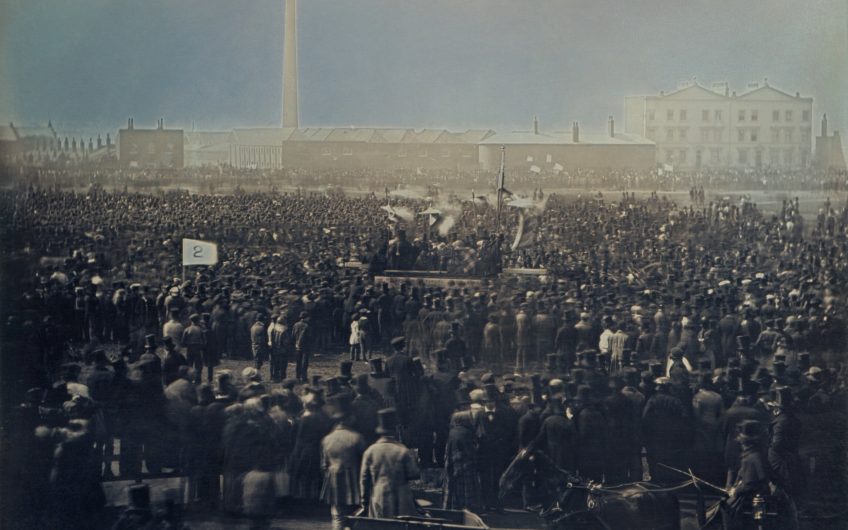 In my local Kennington Park, usually a place of much bustle and some tussles, it’s so strangely quiet you can hear the creaking doors of the now infrequent 133 on the once-busy road alongside.

The playground is chained shut and the swings are still, the café for croissants and cappuccino closed. We can’t kick a ball or lay sunbathing on a towel, counting the planes pass above. My pastime of sitting on a bench, gazing upon the outdoor gym as if it were a piece of public art to be admired from a distance, is no longer tolerated. I’d be moved on by police.

This isn’t the first time we’ve been denied the use of our green spaces. Over 150 years ago today – 10 April 1848 - the Royal Parks were closed and congregating in any more than pairs prohibited.

The Metropolitan Police distributed a poster: ‘All necessary measures will be adopted to prevent persons from marching or moving about in large bodies.’ The Chartists had announced they were amassing in London and, like holiday-homers during a coronavirus crisis, they were being warned to stay away.

Taking the novel railway network from all over Britain, the Chartists were intending to gather at Kennington Common (now Kennington Park), take a ‘monster rally’ across the Thames to nearby Westminster and present a petition. This People’s Charter had six demands - universal suffrage, a secret ballot, payment for MPs, the abolition of property qualifications for MPs, equal electoral districts and annual parliaments. (All, except the last, are now fulfilled.)

But the Chartists, though largely peaceful, were perceived as a public threat. The Duke of Wellington, aged almost 80, was tasked with leading the charge against them, conveying his orders by the new Electric Telegraph. Queen Victoria was evacuated to her holiday home on the Isle of Wight. Cavalry and infantry troops were stationed on London’s bridges to prevent protestors crossing. The parks were closed to stop assemblies. More than 170,000 citizens were sworn in as Special Constables, kitted out with truncheons. Among those answering the call to wear white armbands was Prince Louis Napoleon Bonaparte, future Emperor Napoleon III, who shared his beat with the chef from the Athenaeum Club.

These temporary troops kettled the protestors in to Kennington Park. It was pouring with rain. The land was boggy (it often still is) and a pasture for cows. Imprisoned and impatient, Chartist leader Fears O'Connor MP told the 400,000-strong crowd that the march on Westminster wouldn’t be possible. Instead, the petition - five enormous rolls of paper, each one measuring ten feet - were loaded into three Hansom Cabs and driven to Downing Street.

The rally was a failure. The Times reported that there weren’t 400,000, but a more modest 20,000 protestors. The Chartists claimed six million petitioners, but the rolls contained just two million signatures, many in identical handwriting or with names like Mr Punch, Pugnose and No Cheese. Even a forged signature of the Queen was included. Parliament refused to debate the People’s Charter.

But the Great Chartist Meeting on Kennington Common became famous as the first political rally to be photographed. Photographer William Kilburn produced two daguerreotypes, possibly for the Illustrated London News or commissioned by the Metropolitan Police as early crowd surveillance. They survive today in the Royal Collection at Windsor.

The Friends of Kennington Park hope to erect a memorial to the Chartists of 1848. When we’re allowed to gather in our park again, that is.