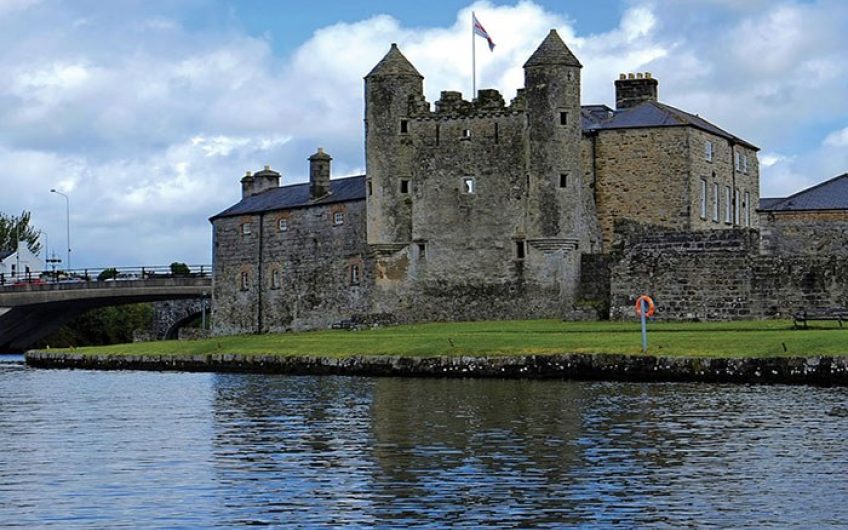 I’m standing in a ruined monastery on a little island in Lough Erne, listening to the actress Anna Nygh reciting the stark spare prose of Samuel Beckett. It’s early in the morning, and the island is cloaked in mist. There are a few dozen of us standing here, all listening. There’s no one else in sight, only a few sheep on a damp hillside. No one, apart from Anna, makes a sound.

I’d been to Enniskillen before and I’d heard all about Happy Days, an annual celebration of the life and work of Samuel Beckett. Beckett came from Dublin but he was educated here in Enniskillen, at Portora Royal School (now called Enniskillen Royal Grammar) and in 2012 the Irish impresario Sean Doran had the bright idea of mounting a festival in Enniskillen in his honour. Rather than just staging his plays in theatres, Doran found all sorts of quirky venues: church halls, masonic lodges, even the spectacular Marble Arch Caves in the hills above the town. The festival was a great success, and it’s now a perennial institution, attracting visitors from all over Ireland, and beyond.

The events that everyone raves about are these Beckett recitals at dawn and dusk, in this abandoned monastery on Devenish Island, a few miles by boat from Enniskillen. I was here last night, and returning here this morning I’m not sure which is more magical – being here at sunrise or sunset.

On the boat back into town, looking forward to my Ulster Breakfast, I get talking to that great actor Adrian Dunbar (Anna’s husband), who was born and raised in Enniskillen. Adrian’s father was a carpenter who died young, just after Adrian went away to drama school. His family still live here and he still spends a lot of time with them. He has a fierce affection for his hometown, but growing up here in the 1970s, at the height of The Troubles, wasn’t easy. We’re in Northern Ireland, but only just – the border is a few miles away.

Happy Days is the name of one of Beckett’s bleakest plays, and in Enniskillen it’s also a title tinged with sadness, for Fermanagh’s county town has had more than its fair share of sorrows. Oldies will need no reminding of the most horrific event in its history, when the IRA detonated a bomb beside the war memorial on Remembrance Sunday, killing eleven mourners and injuring more than sixty. A new community centre now stands where the bomb went off. The grieving Tommy on the war memorial is now circled by eleven doves.

Thirty long years later, the scars of that atrocity endure – but since then something unusual and rather wonderful has happened. Unlike a lot of towns in Northern Ireland, Enniskillen was never stridently sectarian (the two communities always rubbed along together relatively well) and after that calamity, Unionists and Nationalists came together. This spirit of togetherness reached its symbolic peak when the Queen came in 2012 during her Diamond Jubilee. She went to a thanksgiving service in St Macartin’s, Enniskillen’s Anglican Cathedral, then walked across the street to St Michael’s – her first visit to a Catholic church in Ireland, North or South.

St Macartin’s and St Michael’s are both beautiful and St Macartin’s in particular is full of history. A plaque records the numerous bloody battles of the Royal Inniskilling (sic) Fusiliers, from Waterloo to Gallipoli. Another plaque remembers 25 local members of the Ulster Defence Regiment killed during The Troubles, including three brothers from the same family. Here on the frayed edge of the United Kingdom, past and present merge.

Enniskillen has its sombre side, but it’s not all doom and gloom. A new generation has grown up with no first-hand knowledge of The Troubles. Babies born here since the Good Friday Agreement are now starting families of their own. This is a bustling market town, full of old-fashioned shops and handsome Victorian and Georgian houses, and its setting is stunning, on an island surrounded by the River Erne. Enniskillen’s ancient castle houses a fine museum, charting every chapter of its tangled story, from Gaelic Chieftains to Protestant Plantations, from Celtic prehistory to the present day.

There are plenty of good places to eat – and drink, of course. Blakes of the Hollow is the most atmospheric pub; the Jolly Sandwich is the nicest spot for a light lunch. The best hotel, the Lough Erne Resort, is a few miles out of town, on the waterfront. It’s renowned for its two golf courses but you don’t have to be a golfer to enjoy staying here. The rooms are supremely comfy, the restaurant is first class and the views across the water are wonderful. You can see why David Cameron chose to stage the 2013 G8 Summit here.

Before I left for home I went back to Forthill, my favourite spot in Enniskillen. The fortress that gave this hill its name was demolished in the 19th century. Only the foundations survive. A park was planted in its place, with a grandstand for brass bands to play in.

Its crowning glory is a colossal column, dedicated to General Sir Galbraith Lowry Coles (Coles was a local toff who served as MP for Enniskillen & Fermanagh, and fought for Wellington in the Peninsular War). You get a great view from the top. The town lies spread out like a map, surrounded by silver lakes and soft green hills.

Happy Days isn’t the only literary festival in Enniskillen. Half a century before Beckett, Oscar Wilde also attended Portora Royal School, and, spurred on by the success of Happy Days, in 2015 Sean Doran launched a Wilde Weekend of events and readings to commemorate him. Sean believes Coles Monument inspired Wilde’s fairytale The Happy Prince, and who’s to say he’s wrong? You can see the column from the school. When he was a schoolboy, Wilde would have seen it every day. There’s no Wilde Weekend this year but last year Sean painted this statue gold, just like the statue in the story, and though he thought the rain would wash it clean, it’s still golden today. Not everyone approves, but I’m sure Wilde would have loved it – and for me it feels like a fitting symbol of Enniskillen’s regeneration. This town has seen the worst of times, but after all that it’s been through it seems happy days are here again.

Chaucer, the Rolf Harris of English literature – AN Wilson