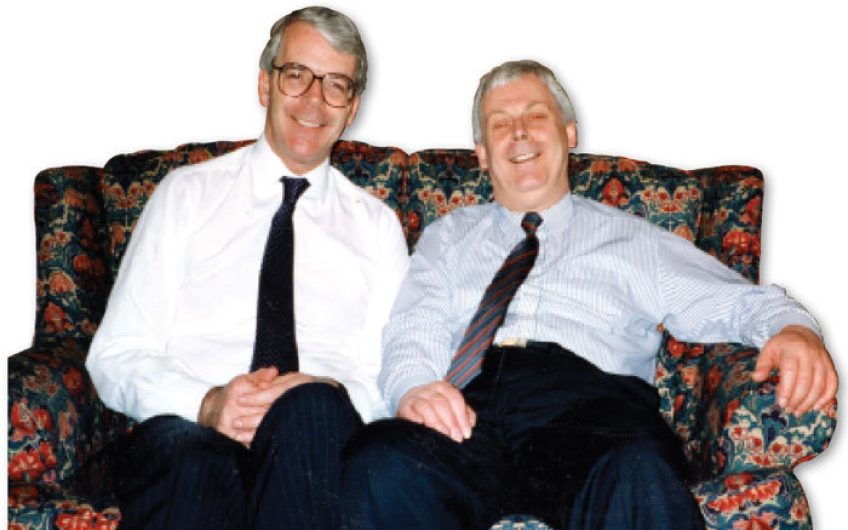 Left: John Major and Terry Major-Ball: ‘John knew how much he owed Terry for keeping the family together in his teenage years when everything could have fallen apart’
View Full Size
1
of 1

In 1995 Terry Major-Ball received unique recognition for his memoirs, Major Major: Memories of an Older Brother. He was given the first Oldie Big Brother of the Year Award at a ceremony at Simpson’s-in-the-Strand. The prize has not been awarded since, maybe because no older brother has distinguished himself in quite the same way.

At the Oldie of the Year Awards Terry received his gong from Terry Wogan, and had the terrifying ordeal of speaking immediately after Spike Milligan had brought the house down with his anarchic wit. A lesser man would have sat down quietly and said ‘thank you very much but I can’t follow that’. But, as so often in his life, such as when the family garden gnomes business collapsed and he was the main breadwinner with two elderly parents and a young brother to look after, Terry was not a man to shirk his obligations. He got to his feet and began a long unprepared stream of consciousness about his often comic life and times.

Sadly some of the distinguished company were laughing at him, not with him. Nicholas Soames, then a junior defence minister, was beside himself. His generous form was heaving with mirth and his face was red. The louder the minister laughed, the longer the big brother rambled on about his garden gnome manufacturing adventures. I wondered then whether a junior member of Margaret Thatcher’s government would have found it so funny if the Iron Lady had had a garrulous older brother.

I came across Terry when I was a reporter on the Evening Standard in the early 1990s. When John Major first became Prime Minister his background was something of a mystery, although it was known that his parents had been music hall comedians, trapeze artists and gnome makers. (Terry once told a radio interviewer in Melbourne: ‘How do you expect me and my brother to be grey men when both our parents were professional comedians?’) Terry was usually able to provide colourful detail on the new PM, although he was often guarded in his revelations. He told me that one day on his way to Victoria Station to catch the train home, he decided to drop in at Downing Street to see his young brother. He was by this time a familiar figure with the policemen at the gate. The PM was busy, but Norma Major was hosting a drinks party. Terry was given what he thought was orange juice but turned out to be Buck’s Fizz. As a result, he fell asleep on the train to Croydon and ended up at Gatwick, the first time he had ever been to an airport. In fact he had never flown in an aircraft, stayed in a hotel or been abroad, except on National Service.

It led to the Evening Standard and Virgin Atlantic putting this right, by flying us both to New York for a four-day stay at the Churchill Hotel in Manhattan. Never having been to New York myself, I was also an innocent abroad. But this was an essential part of our relationship; Terry would never have tolerated me patronising him with superior knowledge about places I had been to before, as I learned when I took him to New Zealand and later to Australia.

In his six and a half years in Downing Street, John Major never tried to curtail his brother’s antics, although they nearly always attracted publicity which may have been unwelcome to the control freaks in the No 10 press office. I suspect this was because the Prime Minister was a kind-hearted man who knew his brother had had a tough life and deserved a bit of fun. But he also knew how stubborn Terry could be and that it was unwise to try telling him what he could or could not do. Certainly John knew how much he owed Terry for keeping the family together in his teenage years when everything could have fallen apart. Although Terry had a reputation for long-windedness, he never gave away any of the secrets which might have made life very precarious for a Prime Minister with a knife-edge majority. He never mentioned Edwina Currie, who could have sunk the Tory back-to-basics campaign for family values single-handed. Nor anything about the landlord in Brixton, who lent them two rooms in Coldharbour Lane when the family business went bust and they had to move from their bungalow. It later transpired, when the ex-PM wrote his own memoirs, that this was a secret half-brother.

Another person who played a key role in the young life of the future Prime Minister was Jean Kierans, who Terry describes as ‘a friend of Mother’s’. Although thirteen years older, Mrs Kierans taught young John all he needed to know about life, and she remained on the scene until he met his wife Norma. When John was a disenchanted teenager, applying unsuccessfully for a bus conductor’s job at Camberwell Bus Garage and watching the same film over and over again at the Ritzy Cinema, Mrs Kierans told him to do some exams and get a proper job. He spent a lot of time in Mrs Kierans’s house and duly ended up working for the Standard Chartered Bank where he met the chairman Anthony Barber, a former Chancellor of the Exchequer, who introduced him to politics.

Who knows what else this generous lady taught him? But, whatever the truth, he seems to have learned how to handle older people, and particularly older women, with astonishing self-assurance, a skill which came in handy when he became chairman of the housing committee in Brixton Council, and later a member of Margaret Thatcher’s Cabinet. Not many of us would have had the aplomb to carry off that consoling embrace of Mrs Yeltsin at her husband’s funeral.

What has all this to do with Terry? Well, the loyal older brother kept one essential insight from us throughout the Major years in government. When in 1967 John Major seriously injured his leg in a car crash in Nigeria while working for Standard Chartered, he returned to south London to be with his family. In Major Major Terry records that John couldn’t stay with them long because he couldn’t bend his leg and this prevented him using the outside lavatory as he couldn’t shut the door. ‘So John went to stay with friends,’ wrote Terry, in a cover-up worthy of Downing Street spin doctors. The friend he went to stay with was in fact Jean Kierans, the revelation of whose existence could have helped Terry sell many more copies of his own memoirs if he hadn’t been so discreet.

When Terry died of cancer in March, his death remained unreported for over five weeks. No one had thought to put an announcement in the papers. The fact only emerged when Beryl Bainbridge met Sir John at a party in Hatchard’s and naturally asked after Terry. Needless to say, he received huge obituaries in all the serious newspapers. How could anyone have thought the passing of such a decent man, and such a eccentric one-off character, should be kept from his many friends and admirers all over the world?

The man who also painted pictures