The day Hitler sent me to Bedfordshire 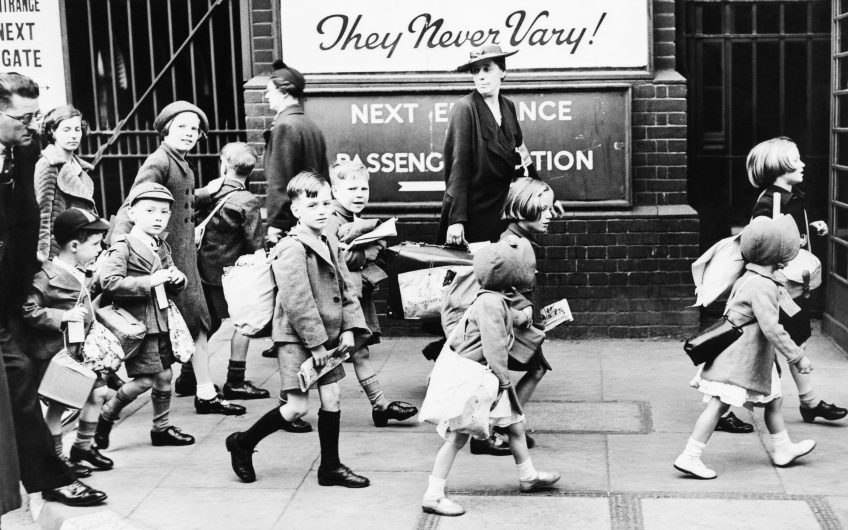 In September 1939, aged seven, I stood on a platform at King’s Cross Station, waiting to be taken somewhere. I didn’t know where and I didn’t really know why. But, most of all, I couldn’t see why all the parents and children seemed to be crying.

My brother, Elliott, was with me and, as the cold fish of the family, he certainly wasn’t crying. But our nanny, Maudie (known to me as ‘Cuddly Bit’) was becoming emotional and hiding it by reminding us to behave when we arrived at the other end. I was sensing that our separation from our family in Tottenham, north London, could be quite lengthy.

I saw no reason to cry. This was simply the most exciting thing ever to have happened to me.

Elliott and I boarded a train for Biggleswade, Bedfordshire – where 30 of us evacuees walked up a wide street in the town with an adult supervisor. We stayed on the right side, which had more gentrified homes, as the supervisor asked each woman who came to the door to take one of us.

The day turned into the most humiliating experience of my short life. The women looked for the neatest and sweetest little girl. After all the girls had gone, the women expressed resentment that only boys were left. Eventually all the single boys were housed and only my brother and I were left. No one wanted us. I remember a burning resentment and a vision of being left in the street to die. Then these horrible people would all be sorry.

But, in the end, we came to a bungalow where, to the supervisor’s relief, a woman was persuaded to take us. Perhaps she was induced by the reminder that she would get two payments instead of one.

In this bungalow lived a husband and wife, who would come to treat my brother and I very well. The trouble was that they were the most unemotional Anglo-Saxons imaginable. To a seven-year old from a Jewish family, this was beyond comprehension.

Looking back, they remain the coldest people I have ever met. Still, they had one extravagance. Every Saturday evening, they went to a pub or a dance hall. And every Saturday evening, Elliott and I were left a salad and a pork pie. The idea made me feel sick. How could I tell them I didn’t eat pork? They didn’t know that I was Jewish or that Jews don’t eat pork. So, every week, Elliott happily scoffed his pie, while I made do with salad.

Even if they weren’t what I was used to, this couple had agreed to take us in when no one else would. And I had many exciting experiences in Biggleswade. I remember sitting on a culvert watching the train tracks when the silence of the evening was broken by the hollow clank of a train signal. Then the Flying Scotsman roared past, almost overwhelming my senses. Within seconds, it had disappeared, and all that was left was steam. In these moments I came to love steam trains.

Another fresh excitement was bringing in the harvest. Steam-rollers were still in use, and local farmers were all eager to take part. Their keenness was explained once the crop had been cut, to leave a square of standing corn. At a signal, the corn was beaten and the farmers, armed with shotguns, opened fire on the multitude of rabbits that burst forth. The scene gave instant meaning to the then-current Flanagan and Allen song, with its refrain: ‘Run rabbit, run rabbit, run, run, run. Don’t give the farmer his fun, fun, fun!’

While I hated seeing the slaughter of the cornered rabbits, I knew, in my heart, how lucky I was to participate in one of the last rural English harvests. I may have received no formal schooling in Biggleswade, but I was spending my time well.

Elliott and I spent two months in Bedfordshire before we were brought home by Maudie when it seemed the feared German bomber onslaught wasn’t going to materialise.

But I was to be evacuated twice more. First to Caerphilly, where I stayed with a wonderfully warm-hearted mining family who allowed us to run free over the castle and its surrounding countryside. And finally to Aldershot, where Maudie and I stayed with her relatives.

In Aldershot, we were visited by another member of my family. My older brother, Sam, was a pilot-in-training with the RAF. While on a training flight in a Wellington bomber, he picked out our house as a landmark, and flew over it at low level. I confirmed he had found the right house by running out into the garden and waving madly.

It was only after the Blitz ended in May 1941 that I returned to London to stay. While my education was hampered by evacuation (I barely attended school), my excitement would never be repeated.

Whatever the many battles I have fought in my life since the war, none has involved an opponent determined to take the liberty of my country – and my life as a Jew.

Lionel Levine is a lawyer who lives in Nassau