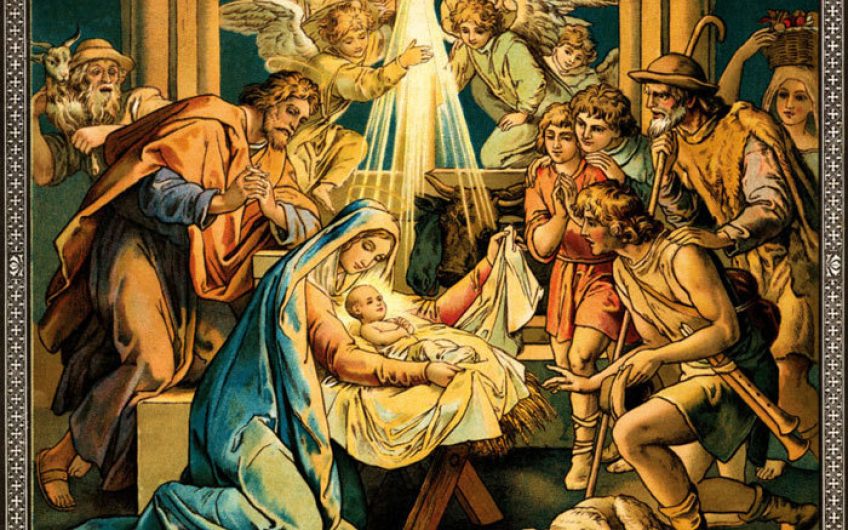 We could start with the star. The Magi saw it and set off from the east. These Magi were not three kings. Their names Caspar, Melchior and Balthasar (the black one on Christmas cards) were invented later, though not by England’s own historian St Bede, as is often said.

Herodotus (born in the Persian Empire, around 484BC, though we don’t know exactly when) mentions magi interpreting a dream of the King of the Medes. It’s interesting that the Gospel of St Matthew narrates the search of these pagans for the King of the Jews. There are a surprising number of pagans mixed up in the Christmas history. But then, the Jewish scriptures (Numbers 24:17) record a prophecy by the pagan Baalam: ‘I shall see him, but not now: I shall behold him, but not nigh: there shall come a star out of Jacob.’

If we could identify for sure the star seen by the Magi, we might date the first Christmas. Johannes Kepler thought it would have been a nova, a new star such as he’d excitedly observed in 1604, appearing with a conjunction of Jupiter and Saturn in 7BC.

It seems to me that it is a question-begging argument to seek a star to fit the likely year of the birth of Jesus and then to appeal to that star as evidence of the same date. ‘This star was not of the common sort, or rather not a star at all,’ commented the 4th-century exegete St John Chrysostom. ‘No star moves in this manner.’

So how can we date Jesus’s birth? The historical documents are the Gospel of St Matthew and the Gospel of St Luke. Titus Flavius Josephus, the Jewish historian born about AD37 (we don’t know the exact year), mentions Jesus once or possibly twice, but not his birth. Matthew says that Jesus was born ‘in the days of King Herod’. This was Herod the Great. Josephus gives a date for Herod’s death that might be in 3, 4 or 5BC, but is confirmed by an eclipse of the moon mentioned by Josephus as 4BC. So Jesus was born before that.

This seems not to tally with the date given by Luke for the census that took Mary and Joseph to Bethlehem. It was, he says, while Quirinius was governor of Syria. That wasn’t until AD6. There may easily be some explanation for the discrepancy, but I don’t know what.

A luxury we take for granted is the AD dating system. But the man behind it calculated Christmas a few years too late. That was Dionysius Exiguus, a little chap, his name suggests, who was born between the Danube and the Black Sea, but living in Rome in 525, when he set about improving the annual lunar dating of Easter. The Christian era was a sort of by-product, and Anno Domini was popularised globally by good old Bede.

Computus, the reckoning of the calendar, was meat and drink to the so-called Dark Ages, but I confess I find it baffling. Details are given in Leofranc Holford-Strevens and Bonnie Blackburn’s brilliant Oxford Companion to the Year, with tables of epacts to send your eyes dancing.

Born, though, Jesus was. Luke’s account is sparing in detail. His mother Mary ‘laid him in a manger; because there was no room for them in the inn’. That’s how the Old Masters depict things, with the ox and ass – not mentioned in the Gospel account. Painters put them in because the prophet Isaiah wrote, ‘The ox knows its owner, and the ass its master’s crib,’ and the prophet Habakkuk wrote, ‘In the midst of two living creatures you will be recognised.’

Go to Bethlehem today, and the birthplace of Jesus preserved at the Church of the Nativity is in a cave. That is nothing out of the ordinary in those parts. The philosopher Justin Martyr, born about AD100 (though we don’t know the year exactly), mentions the cave in passing.

St Augustine of Hippo, the great Latin rhetorician of North Africa and greater bishop, gave a rather shocking reason for Jesus being laid in a manger. It’s because we human animals, the sheep of God’s flock, must eat God-made-flesh – the baby in the manger. He is proposing not cannibalism but consumption of Jesus as the bread of heaven (in Holy Communion). After all, Bethlehem means the House of Bread.

Augustine’s exegesis is wildly metaphorical compared with the narratives of Matthew and Luke. They mean to be factual; hence the mentions of Herod and Caesar Augustus. But their gospels have been compared to a Haggadic Mishnah – an explanation of Jewish scripture. They quote biblical prophecies not only to prove the status of Jesus but also to explain the prophecies.

Unlike the Greek he uses in the rest of his Gospel, Luke’s narrative of Jesus’s infancy has been found to contain Semitic syntax and turns of phrase. It is suggested that this indicates use of an account given by Mary the mother of Jesus. Certainly, he claims to know her thoughts: ‘Mary kept all these things, and pondered them in her heart.’

Mary and Joseph would have spoken Aramaic, a Semitic language close to Hebrew. Modern Aramaic is still spoken in the war-torn regions of northern Iraq. Jesus learnt Hebrew, too, as the scene of his reading from a scroll of scripture in the synagogue shows. Some of his disciples spoke Greek well, and it was a lingua franca in the Levant.

For the journey, Joseph and Mary probably brought dried provisions, with wine in a skin. If they brought bread, they’d have had to steep it in water, wine or vinegar when it grew stale.

Otherwise, there were dried fish, dried figs, cooked chickpeas and lentils, olives and olive oil. Dietary laws ruled out pig products and shellfish, but not hopping locusts. Lamb, obligatory at Passover, was expensive, but sheep’s and goat’s milk were available from those shepherds summoned by angels. I don’t know that angels were more or less common then than today.

If it was winter, the stable would have been cold at night. The Gospels give no hint of the time of year. Christmas celebrated on 25th December only came in from the late 4th century. That coincided with the newly popular Roman feast of Sol Invictus; so Christians (such as Augustine) had to explain that they did not worship the Sun.

When Jesus was born, there was some expectation of an age of peace. Virgil, invoking the Cumaean Sybil, prophesies in his fourth Eclogue, written in around 40BC, a boy coming down from heaven and initiating a golden age. Some saw it in the reign of Augustus (Emperor 27BC-AD14).

Perhaps in the year 748 ab urbe condita (after the founding of Rome), in the 38th year after the first consulship of Augustus, which we call 6BC, a child was born in Bethlehem who changed the calendar of the whole world.

Lost between Britain and New England