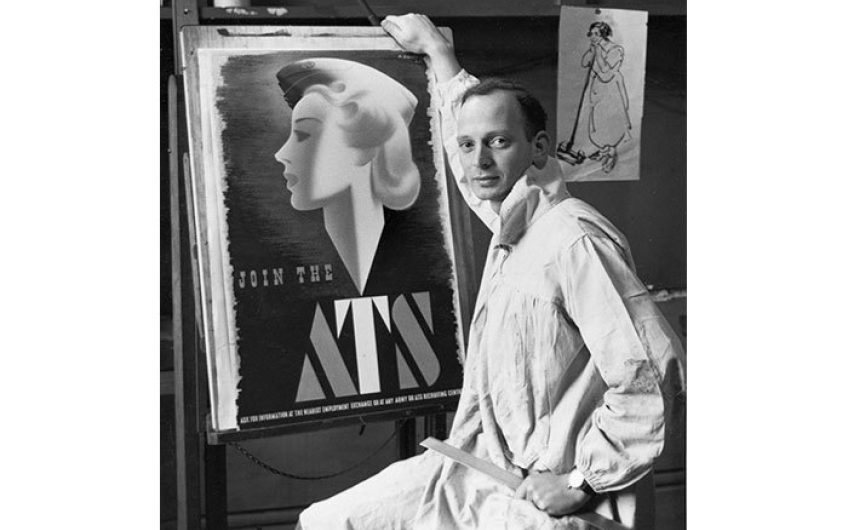 What is it about posters and turmoil? They are the oldest double-act on the street, still going strong after centuries.

Nothing of note has ever happened without someone pasting up a picture and a few words on a wall to tell passers-by that their views are wrong, correct or absent.

One of the more surprising absences amid the current bout of political mayhem in Britain are those endless variations of the wartime 'Keep Calm And Carry On' posters. You might recall that they were reborn, drenched in irony, during the economic crash of 2008-09 and erupted on mugs, t-shirts, postcards, key fobs and drink coasters, you name it,,. Perhaps we have transcended irony. Or is it that we no longer wish to keep calm or carry on, at least as we used to?

Thanks to a new exhibition at the National Army Museum in Chelsea, we can see some of the finest posters created during the 1940s, when keeping calm and carrying on was de rigueur. Finest in the sense that not only did they achieve their primary objective – to attract attention – but they did so in a way that raised them beyond mere vehicles of communication to examples of higher art.

The posters are the work of Abram Games, a working-class commercial artist from the East End who was largely self-taught. During the 1930s his style – sparse, finely focused, subtle, vivid and utterly modern – found favour with clients including London Transport and Shell. He was a master of the airbrush, still a new creative tool when he took it up before the war. By 1941, Games was one among dozens of graphic designers and artists seconded to the war effort, working within the War Office. That year would prove auspicious.

It was perhaps one of the most miserable autumns that Britain had endured. It wasn’t the weather. September and early October had been mild and largely free from rain, with a few days as warm as summer. But this was 1941. German forces were poised to take Moscow. The Wehrmacht’s advance scouts could just make out the spires and domes of the Kremlin through their binoculars. Inside that bastion much of the Soviet state was scarpering. Thousands of Communist party and government apparatchiks were boxing up or burning mountains of documents before retreating to Russia’s emergency capital, Kuybyshev, 600 miles away on the southern Volga. Stalin, for the past four months Britain’s only significant partner in the fight against Hitler, had gone silent. In the North Atlantic, U-Boats were picking off Allied shipping with only minimal losses to their rapidly expanding 'wolfpacks'.

America remained opposed to intervention in the war in Europe. Roosevelt had gently nudged his resolutely neutral country towards participation in the conflict – but when, in the middle of that October, the Kearny, a US destroyer on convoy protection duty off Iceland, was hit by a German torpedo and 11 sailors killed, the American public recoiled from any further involvement in the war. Two weeks later, another US vessel on convoy protection duty, the destroyer Reuben James, was sunk by a U-Boat, with more than 100 lives lost. Yet, as October drew on, the big news for most Americans was not the plight of their British cousins but the imminent release of Dumbo. Disney’s fourth blockbuster would be its most lucrative yet.

As the third winter of fighting neared, Britons may have felt, with good reason, more alone than ever. Yet, that autumn, another front had opened up in the war, a domestic fuss over sex and mores. It all came to a head over a poster.

Abram Games had been asked to come up with new posters to entice young British women into joining the ATS, the Auxiliary Territorial Service. The ATS needed thousands more volunteers to carry out essential, but unglamorous, work as office staff, drivers and telephonists. Games came up with a striking design – a profile head and shoulders of an attractive blonde in an ATS hat, and the simple text 'Join the ATS'.

The poster seemed colourful and vibrant, yet was largely made up of browns and greens. The model for the ATS woman was, Games would later reveal, a 19-year-old worker at the War Office, one Doreen Murphy. The posters began to appear around Britain during the dismal, doomy September and early October of 1941, and she was soon dubbed “The Blonde Bombshell”.

Did the poster succeed in its aim? Yes, but what a silly question. There was a war on, and there were considerations other than success. Did it attract attention? Certainly. But not quite how Games or the War Office anticipated.

In the middle of October, The Tatler was among the first to comment on the new poster, and it did so in its characteristically wry tone: 'That new recruiting poster showing a ravishing Ziegfeld Folly with an ATS cap perched archly on her golden locks… Is the ATS advertising for a beauty chorus, or what?...

'It’s high time the publicity boys began to lay off the glamour racket, which is driving masses of citizens half crazy.'

A few days after the Tatler’s tongue-in-cheek tirade against The Blonde Bombshell, the question of the poster was brought up in Parliament. On 23rd October, a busy Thursday in which the Commons dealt with matters ranging from assistance to Russia to civil defence and military service, Thelma Cazalet, Conservative member for Islington East, asked Ernest Bevin, the Minister for Labour and National Service, to withdraw The Blonde Bombshell poster. The poster, she argued, was 'unsuitable' – inappropriately sexy, especially in a time of national crisis.

Cazalet, a feminist Tory from a family of progressive, liberal socialites, was an unlikely censor. But the war was turning political and social convention inside out. It would only be won with the participation of women at every level, a reworked social landscape that promised new liberties and destabilised old certainties.

'London was a Garden of Eden for single women in those years,' recalled the American journalist Mary Welsh, based in England during the war, 'a serpent dangling from every tree and streetlamp, offering tempting gifts, companionship which could push away respective lonelinesses, warm, if temporary, affections…'

The problem with the poster, in the eyes of Cazalet, was that it appeared to be a product of that 'glamour racket' the Tatler had mentioned, the commercial, beauty-and-fashion industry version of femininity which was, she held, at odds with the unvarnished, unglamorous, unsexy demands and duties of total war. Thing is, the war, on the home front, was proving to be a foundry for desire. 'Temporary affections' of every kind abounded. It was impossible to separate passion from the cooler duties of a national emergency. The poster was a success. Thousands of young women signed up to the ATS.

Games’s Blonde Bombshell drew its power from the sexual energy released during the war. But it wasn’t the only one to do so. The other famous poster women of that conflict – the American factory worker, aka Rosie the Riveter, flexing her right arm muscle to the message 'We Can Do It!', and the sultry cocktail party blonde, surrounded by military men, bearing the message 'Keep mum, she’s not so dumb: Careless Talk Costs Lives' – are, in their own ways, at work. But The Blonde Bombshell is simply a picture of a young woman’s head in profile. That was its genius. As Games put it, good design was a matter of 'Maximum meaning, minimum means'.

Cazalet’s intervention in Parliament ensured that the story of the poster and its alleged unsuitability was covered by just about every British newspaper. Bevin’s response was diplomatic. 'I understand that this poster has evoked commendation and criticism in about equal proportions,' he told Cazalet. 'Reserve stocks of the poster are now exhausted, and I do not propose to reprint it.'

Subsequent versions toned down the sex appeal. Games would design two more recruitment posters for the ATS. For the successor to the unsuitably sexy Doreen Murphy, a War Office teleprinter operative, Mary Roberts, was chosen to be the model for the next poster. 'But Mary has quite a bit of glamour, in a quiet way, don’t you think?' asked the Sunday Mirror, noting the passing of The Blonde Bombshell. 'She’s 20, 5ft 4in, slim – and single.'

A lifelong socialist, Abram Games could be hard-hitting in his art, especially when focused on social welfare. In 1943, he was asked to produce a series of 'motivational' posters, pointing to the broader march of progress in which victory over Germany would be just one step. For one of these posters, Games depicted a squalid backyard and a single child with rickets behind the then breathtakingly modern public health centre building at Finsbury, central London. The past and the future. Churchill saw the poster at an exhibition at Harrods. Furious with the suggestion of a disease-ridden Britain, personified in the disabled child, he had the poster withdrawn from circulation and all copies destroyed.

Games went on to design some of the most memorable and acclaimed posters and designs of the 1940s, including more than 100 during the war. The National Army Museum has the finest collection of these, a gift from the Games family. He worked through the 1950s – including the famous compass-point logo for the 1951 Festival of Britain – into the 1970s. Games died in 1996, having created acclaimed and highly influential artwork for, among others, British Airways, London Transport, Penguin Books, the Post Office and the Financial Times.

Posters of all kinds long since became the fiefdom of photographers and copywriters. The work of Abram Games reminds us that our streets once had a touch of fine art about them.