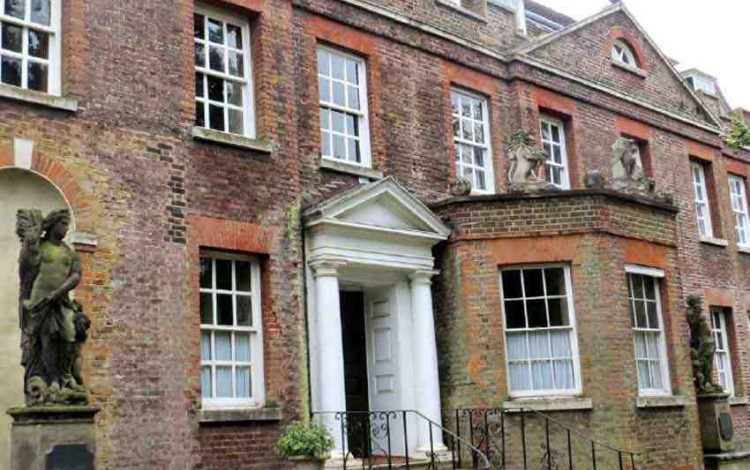 Southside House, built in 1687 around the core of a Tudor farmhouse
View Full Size
1
of 1

As far as I know, it is the lone survivor of such an arrangement left in the country. In the hallway, hung heavy with canvas painted to look like tapestry, is an 18th-century hole in the wall, into which you poked your head for your wig to be set to rights.

A tiny ‘peruke powder page’ would have been there to do the honours, crouching behind the hole in a small, darkened room all day, forever at the ready, with curlers and combs, waiting for a dishevelled head to appear for coiffing.

There are many such remarkable survivals at Southside, a veritable treasury of British and European history. Great has been my good fortune to have seen them, most particularly as Southside is about to be sold, with many of its contents being taken to a family house in Herefordshire.

It was built in 1687 around the core of a Tudor farmhouse. For the next 300 years, it was jam-packed with a magnitude of startling-you-out-of- your-wits stories and their attendant souvenirs.

Take the pearl necklace wrenched from Marie Antoinette’s decapitated body on the scaffold. Piercing you through with its poignancy is the loop of loosely-strung pearls belonging to the imprisoned queen. She gave them as payment to the wardress to allow her a glimpse of her little son, the Dauphin Prince, exercising in Paris’s Temple Prison yard below.

These were given to a Monsieur Barras, who was at the queen’s execution as the representative of the revolutionary government. He later gave it to his mistress, Joséphine de Beauharnais. As the revolution raged, she abandoned her lover and struggled to save her family and friends from the guillotine. She sought help from the British Embassy, when a 16-year-old youth, John Pennington – of Southside House – became the hero of the hour by smuggling out five separate groups of condemned aristocrats from France. Thus began the association with Southside.

Joséphine went on to marry Napoleon. Later, when Pennington was summoned to the Empress to be thanked for his valour, she presented him with this necklace. The Emperor, she said, would not have it in the house: ‘Ça – non! Ça – non!’ It was too grim a victor’s trophy for Napoleon; and so it still lies in Wimbledon today.

I was told all these stories by what most magically felt as if it was ‘straight from the horse’s mouth’ – Malcolm Munthe, the great-great grandson of John Pennington. His mother, Hilda, got the story of the pearls from her grandmother, whom she could remember very well. There were therefore only three generations between Marie Antoinette and my companion in Wimbledon. He was the son of Axel Munthe (1857-1949), the famed Swedish physician and author of The Story of San Michele.

What a particularly delightful man Malcolm was: so full of stories – and what stories! – spoken at a speed that rendered you quite faint with the tsunami of his words. His tales poured forth 19 to the dozen. When Henry James came to dinner – which he often did – Malcolm was warned by his father not to be surprised that James had to chew every morsel 12 times.

The result, in Malcolm’s words, was that ‘The time, the conversation, the silence became excruciating. We were fascinated, counting – one munch, two munches, three munches, four munches ... 12 munches – then he swallowed it!’ His hands flew up at the excitement of the memory.

Malcolm also remembered the fear that Hilaire Belloc, the Catholic historian and polemicist, inspired in his mind when he was a child: ‘a giant bear of a man with a fierce face and a fur coat to the floor’.

Southside was left empty only once, in incredibly picturesque circumstances. In 1941, after the garden was bombed, Hilda Pennington was forced to leave, taking what valuables she could manage, to their house in Herefordshire.

She had no car. But, nothing daunted and with the aid of a local riding master, she hauled an 1830s coach out of the coach house where it had stood for over 100 years. With no brakes – other than a ‘slipper’ to be pushed by a (non-existent) footman down on to the road before the coach went down a hill – and lined with satin festooned with crimson hammercloth, the Berlin carriage swayed off, through London at the height of the Second World War, on a journey of over 120 miles to Herefordshire.

Southside is an architectural mix of 17th- and 18th-century rooms. In the Music Room, one end has its original fireplace dating from the 1680s, while, at the other, the fireplace dates from the mid-1700s. This is a huge room – two knocked into one – built for a one-day visit by Frederick, Prince of Wales.

A portrait of Lady Hamilton hangs proud on the walls. She used to come to Southside when she and Lord Nelson lived at Merton House next door. She would perform her ‘attitudes’ – dressing in the Greek or Roman style, giving ‘a living spectacle of the masterpieces of the most celebrated artists of antiquity’. It was said, though, that she had ‘the ease of a barmaid’. Malcolm’s grandmother thought her ‘very vulgar’.

Goethe, however, praised her performances to the skies: ‘It is like nothing you ever saw before in your life.’

The platform on which she entranced her audience is still on the floor. So too is the table – the worse for wear and drink – on which Lady Hamilton would endlessly play cards after Lord Nelson died.

What pleasure, too, to come upon a miniature of Charles II, alongside an emerald the King gave to his mistress Nell Gwyn.

Here is the diamond ring Charles I took off his finger and gave to Nicholas Kemeys (an ancestor of Malcolm Munthe’s) after his bravery at the Battle of Naseby. Here is the exquisite, enamel, bejewelled brooch with a pendant death’s head and cross given to the family, again by Charles I.

Marie Antoinette’s necklace takes centre stage in this assembly, surrounded by grass from the field at Culloden, along with a little silver box of congealed cough drops left by Edward VII when he rested here after reviewing manoeuvres on Wimbledon Common.

Then there’s the heart-stopping portrait of Philadelphia Carey, who accompanied Anne Boleyn to the scaffold. Philadelphia was the daughter of William Carey, married to Anne Boleyn’s sister. This portrait was sent to Elizabeth I, so that the Queen could judge her suitability as lady-in-waiting. In her hand, Philadelphia is holding a comb – the very comb Anne Boleyn used to arrange her hair for the descending axe.

Unwashed since the scaffold, that very comb is still at Southside, along with Anne Boleyn’s ‘vanity box’ used on that same sorry day.