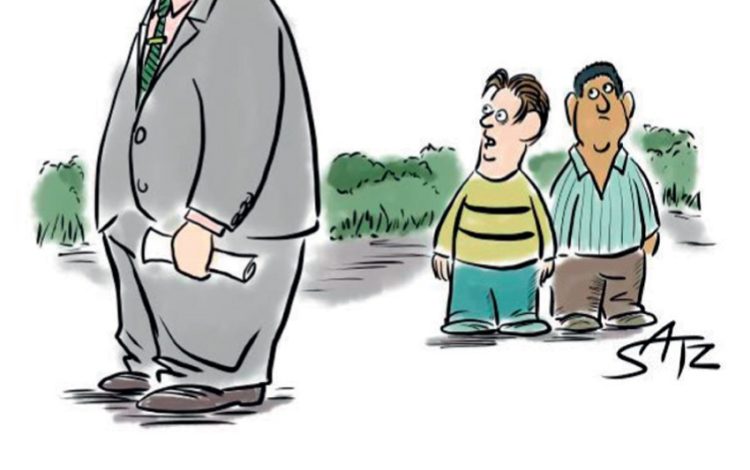 We recently had a house meeting in which the motion ‘Should Mr Home Front Be Allowed on Holiday This Year?’ was put to the vote. The No’s won outright by 3–0. Before anybody thinks this is a case of bullying, I should point out that his hand shot up backing his own banishment.

How did it come to this? Well, there are the usual financial considerations. Holidays – even the Thomson package ones where Karen the rep browbeats us into singing ‘Delilah’ on karaoke night with Ron and Brenda from West Bromwich – are quite pricey. So obviously without him we can save on flights and accommodation.

And then there is the whole dog issue. Our rescue terrier Lupin suffers from chronic separation anxiety. The moment suitcases are produced, he shrivels up into a ball, and shivers violently like an abused cur in an RSPCA poster. Usually, Mr Home Front’s godmother Annabel has Lupin to stay with her. She always gives him a good report, though I suspect she is far too nice to let us know how high maintenance he really is. I only recently learned, for example, that Annabel has to sleep with Lupin in the spare room because he won’t let her husband in the marital bed. So leaving Mr HF at home in front of the television watching Channel 4 racing or the snooker means the chances of Lupin behaving like a canine Norman Bates, or suffering an irreversible nervous breakdown, are considerably reduced.

Mr HF would like everyone to believe that he has voted himself out for altruistic reasons. But I suspect the real reason is he doesn’t actually like going on holiday with us. Suggestions of group activities are usually met with a barrage of excuses. In Dorset, it was ‘The Ashes are on’. He bailed out of a trip to some blue water caves in Kefalonia because he said he was ‘claustrophobic’. And the day we went on a coastal walk in Devon, he sat reading Viz in the car for two hours claiming to suffer from vertigo.

The moment he steps on foreign soil, he also starts channelling Bernard Bresslaw from the Carry On films. It’s all ‘Johnny foreigner’ this and ‘Things were better when we were in charge’ that. Any outing in which he is involved invariably goes catastrophically wrong – like the time he hired a speedboat in Greece and managed to get it caught up in the ropes of a yacht moored in the shallows. The owners, two bronzed Italian men in Speedos, ran to the water’s edge screaming and gesticulating at us. (‘Bloody excitable surrender monkeys,’ murmured Mr HF, ‘what’s their problem?’) No sooner had he managed to get us untangled than he started the motor with a cringeworthy flourish and promptly ran our boat onto the rocks, destroying the propeller blades. Another time, he made us walk two miles across rough terrain to a small beach he was convinced no one else would know about. ‘See? Deserted – what did I tell you?’ We soon discovered the reason it was deserted was that it was situated next to a sewage outlet. At another of Mr HF’s deserted beaches, we were attacked by a swarm of wasps.

I actually find it a complete mystery how he manages to survive in his job. In the past nine months he has travelled in and out of three of the most dangerous places on earth – Libya, Iraq and Syria – and come back unscathed. Sometimes I wonder if he is just pretending to visit these war zones, like the disgraced round-the-world yachtsman Donald Crowhurst reporting false positions. Now I come to think of it, the only evidence of his Middle Eastern travels is a photograph he put up on Twitter of a grim-looking toilet. And the only reason he did that was so he could write the caption: ‘The khazi in Benghazi’. The last time he returned from Syria, he boasted that he had been just fifty feet away from Isis fighters (‘You could see the whites of their eyes’). Was this even true? Or had he just been watching Pointless for ten days at the Holiday Inn near Heathrow?

These are the questions I shall be pondering on the beach this summer in Corfu (although The Great War Reporter keeps insisting we go to Tunisia: ‘Great beaches, and you’re sure to get a bargain on account of all that unpleasantness.’) Coming soon, the motion: ‘This House Believes Mr Home Front Should Move to a Bedsit Round the Corner.’