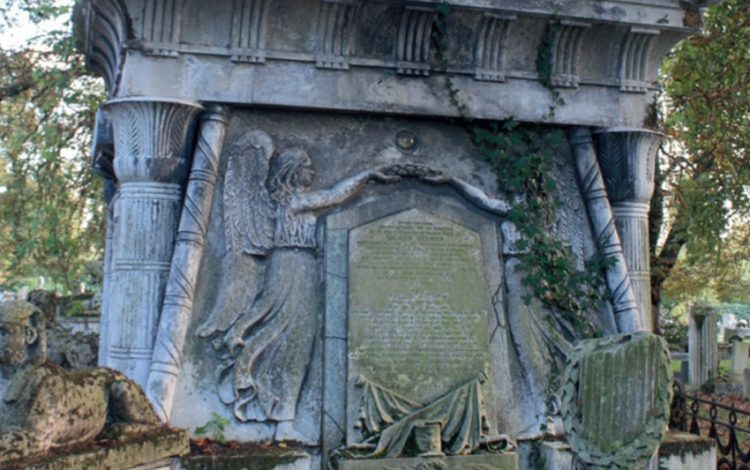 What better way to spend a Sunday afternoon than on a guided tour of a cemetery? And what a cemetery! Kensal Green has more than 65,000 graves in 72 acres of west London between the Harrow Road and the Grand Union canal. To the south it is overlooked by enormous gasholders and its eastern end offers an excellent view of the large Sainsbury’s store on Ladbroke Grove. The Anglican chapel, whose mock-classical frontage mimics the Bank of England, is unused, awaiting the restoration that may or may not come. The grand avenues in front and behind it are lined with the neo-Gothic mausoleums and monuments of the Victorian rich and famous, lording it over the more ordinary folk, many of whose modest headstones are now skew-whiff, knocked sideways by the vagaries of London clay and English weather. It is a remarkable place, but not orderly. Every now and again, wedged into a small empty patch between century-old graves, there is a new one, its shiny black marble zinging out amid the weathered granite.

Unlike English churchyards where tidiness is next to godliness and self-expression is sacrilege, here the dead are celebrated in the ways they or the bereaved feel fit. The tomb of a major-general from the Madras army, died 1883, tells us his last words were ‘Oh, joy, joy, joy’; the headstone of Kenneth Leonard Collins, 2007, is engraved with the image of an angler and three darts and the words ‘Gone fishing’; many, following the custom of their occupants’ country of origin, carry photographs of the deceased; there are children’s graves loaded with toys and windmills and one backed by a big placard for Queens Park Rangers FC.

On the cemetery’s outer circle is the immaculately maintained resting place of Mary Scott Hogarth, Charles Dickens’s beloved sister-in-law, who died aged seventeen. For him she was an object of unparalleled devotion. ‘So perfect a creature never breathed,’ he said. Near her are the newish graves of an Ahmed, an Otubusin, a Patel and a Navokovic. This is Kensal Green, this is London. Years ago, I heard an old Jamaican lady tell her friend that she yearned to go back home. ‘I don’t want to be buried in the Harrow Road,’ she said. I hope for her sake she isn’t.

Kensal Green, the first of the seven large cemeteries built on the city’s periphery to cater for the fast-increasing industrial revolution population, sold its clients freehold plots with security of tenure for the deceased – a privilege then no longer readily available, such was the weight of London mortality. There were early takers but its grip on the market and the unrivalled fashionability it achieved were only assured ten years later when the Duke of Sussex, sixth son of George III, chose it. He wanted to be joined there in due course by his second wife, the former Lady Cecilia Buggin, who did not qualify for a more regal resting place. His funeral attracted large crowds and established the brand (so to speak). Five years later his sister Princess Sophia, whose history is too tragic to recount here, was buried in a gorgeous Italian tomb opposite.

These days Harold Pinter is to be found very close to the Duke, which may have surprised him, with J G Ballard only a stone’s throw away. At Kensal Green they are in good literary company: Anthony Trollope is here, William Makepeace Thackeray has a difficult-to-find grave far from the main thoroughfare with an inscription now much harder to read than his books, and there’s Wilkie Collins, who, though very rich, insisted on a headstone and cross that cost no more than £25.

The most grandiloquent memorial of them all belongs to the circus performer and impresario Andrew Ducrow, who died in 1842, age 48. His tomb has sphinxes, angels, winged horses and weeping women; the great tightrope walker Charles Blondin, by contrast, has a restrained and elegant pink marble monument, and the marble block for Sir Marc Isambard Brunel (later joined by his son Kingdom) is of the utmost simplicity. Its inscription says ‘He has raised his own monument by his public works’: when you have the Wapping-to-Rotherhithe tunnel, who needs angels?

For lovers of gossip there’s Queen Victoria’s cousin the Duke of Cambridge, buried here ostensibly so his morganatic wife Mrs FitzGeorge could be with him but actually so he could be near his mistress Louisa Beauclerk. The red granite pedestal for Dickens’s illustrator George Cruikshank lauds him as a temperance campaigner whose remains had been removed and promoted to the grandeur of St Paul’s Cathedral – presumably before it was known he had eleven illegitimate children.

G K Chesterton’s wrote: ‘For there is good news yet to hear and fine things to be seen/Before we go to Paradise by way of Kensal Green’. And so the magnificent pub in nearby Kilburn Lane is called Paradise. It has an excellent restaurant and does as good a Sunday lunch as you’ll find. Whether for your Sunday afternoon constitutional or via high blood pressure to your eternal rest, the likelier route is Kensal Green by way of Paradise.

March–October, guided tours on Sundays at 2pm. In winter, the first and third Sundays of the month. £7; £5 concessions and members of English Heritage.