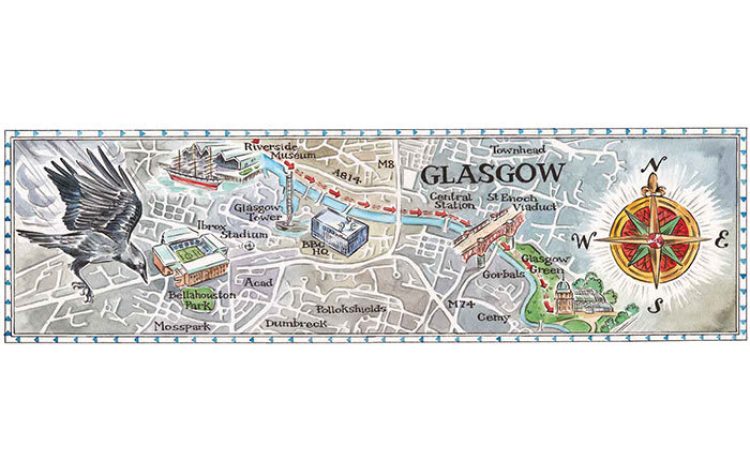 Patrick Barkham had bleak expectations of Glasgow but left it mesmerised

A search for the ultimate experience of British midwinter bleakness took me to the banks of the River Clyde.

I knew nothing of Glasgow, or the Clyde, except for its history of shipbuilding. Online accounts of the walk beside this mighty brown river looked promising for bleak-seekers. They bemoaned the litter and dog poo, the industrial buildings and inconsiderate urban cyclists.

The taxi-driver who dropped me off at the Tall Ship on the Clyde’s north bank, a couple of miles west of the city centre, was unexpectedly gung-ho about Glasgow. When are taxi-drivers positive? He described a five-year boom since the Commonwealth Games; an influx of wealthy American golfers; new hotels and luxury flats for Chinese students going up everywhere; ships still built by BAE Systems.

I started to wonder, as a selfish, bleak-seeking tourist, if I might prefer post-industrial ruination.

My first look at the side of the Clyde took in a sleek museum of Nordic appearance beside silvery-grey water that made me think I’d been taken to Gothenburg by mistake. Silver birches were artfully arranged around the Riverside Museum. And the Tall Ship, the three-masted Glenlee, has been elegantly restored after being rescued from the ignominy of a Spanish scrapyard.

But the riverside path soon petered out in a rough, fenced car park, and an attractive dereliction took hold. I skirted a little slice of pre-Docklands Thameside in miniature, attended by all dereliction specialists, from buddleia to wind-surfing jackdaws.

Cycling commuters glowered like the skies as an unfamiliar walker took up the shared path around a new boom town, grandly called the Scottish Event Campus (SEC).

An old photograph showed that this collection of cavernous sheds was built on the Queen’s Dock, a graceful, lozenge-shaped waterway which was filled in as recently as the 1980s. I’d like to hope we wouldn’t destroy such waterscapes today.

Post-industrial landscapes should be playgrounds for kids, but they are mostly playgrounds for superannuated starchitects. The SEC Armadillo by Foster and Partners was lovable, but it was outnumbered by unloveable hotel blocks and a new sponsored auditorium.(The spread of sponsorship from football stadiums to other buildings is a scary: how soon before we get the Irn Bru Cathedral?)

Nearby was the Glasgow Tower, a rotating viewing tower which had earlier defeated the taxi-driver’s positivity. It was mostly defunct, he grimaced. ‘The ball-bearing has been a disaster.’

I was enjoying this walk, tutting at the lavish use of licence-fee-payers’ money on a vast BBC Scotland HQ which dwarfed the humble STV building next door.

Moving under the optimistic sky-motorway of the M8 bridge – opened by the Queen Mum in 1970 – the roar of traffic receded. Elegant Victorian and Georgian buildings that spoke of Empire asserted themselves and the Clyde’s water turned improbably silky, ruffled for a moment by a diving great-crested grebe.

By the handsome red sandstone of St Enoch Viaduct, I was suddenly reminded of Sydney. The grid of central streets; the sudden rise from the water; two cities that once buzzed with imperial trade. The authority, wit and chattiness of the people I met in each city were similar too, although I’d back any of the formidable Weegie women in full war paint to take care of business (in their case, at this moment, Christmas shopping) over anyone else in the world.

I was fully in love with Glasgow by the time I completed my walk in a magnificent park featuring a beautiful, miniature Crystal Palace, a monumental obelisk and topiary yews. A nifty sign at the entrance counted cyclists on the path: 207 that morning; 210,943 so far that year. This grand park was empty, apart from four magpies trampolining on the spongy grass, and I smiled when I saw its name.

Glasgow Green summed up the unpretentious grandeur of a stroll beside the Clyde.

The Clyde Walkway starts by the Tall Ship and finishes 40 miles east in New Lanark. I took a two-hour stroll along the glamorous city-centre stretch to Glasgow Green

Mugabe was a good leader – before he turned nasty