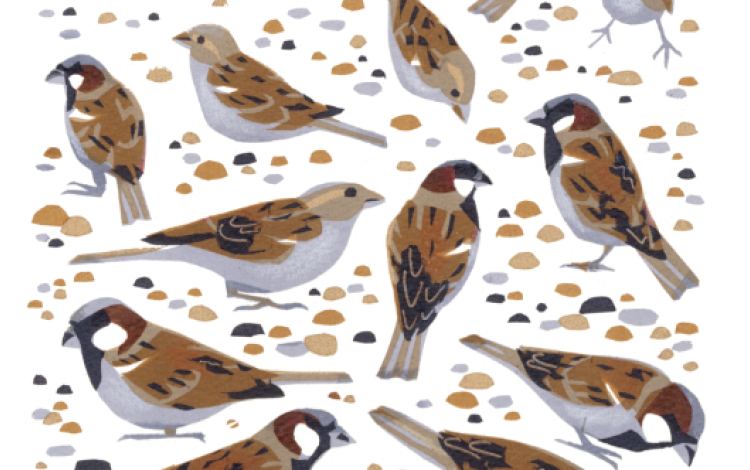 No bird divides the experience of oldies from the young as dramatically as the house sparrow (Passer domesticus).

There was a bounty of a halfpenny a bird (approximately 8p in 2017) in the Second World War, so damaging to food supplies were its numbers considered.

Their rampant breeding made them for Aristotle ‘of all birds the most wanton’, also reflected in the 1940 music-hall song ‘Wot’cher Me Old Cock Sparrer’. Hence their traditional reputation as an aphrodisiac, both in their eggs and meat.

Now, especially in town, house sparrow numbers have plummeted. In Paris the population has fallen by 200,000 in seventeen years. This the bird so emblematic of the city that Edith Piaf (slang for ‘sparrow’) adopted its name.

The decline was famously charted by Max Nicholson, founder of today’s Worldwide Fund for Nature. As a twenty-one-year-old, in 1925, he enlisted his brother Basil to help make a complete avian census of Kensington Gardens.

They devised nineteen sections and, on 2nd and 4th November, spent nine hours counting. The method had been successfully pioneered in America, but never before in Britain. It revealed thirty species and 3,982 birds, of which 2,603 were house sparrows.

In 2000, attended by the now legendary ninety-six-year-old Nicholson, there were eight sparrows. It was a sunny November morning and most of the deciduous trees were bare. At the first census, they had been thick with leaf.

‘Global warming!’ – that was Nicholson’s conclusion for the birds’ decline, combined with his hunch that they had a suicidal tendency to celibacy once numbers fell below a certain level.

Sparrows disappeared from central London north of the Thames. Then, in 2015, three were seen in Kensington Gardens. Revival was as inexplicable as decline. In my Camden neighbourhood, the colony had gone by 2010; since 2015, it has risen to double figures. Yet, in Honor Oak and other south London boroughs, that merry ‘chirrup’ (‘Cheer up! Cheer up!’) greeted one through north London’s sparrow-less years.

Oarsman Alex Gregory, double Olympic coxless fours champion, told on Radio 4’s Tweet of the Day how he saved a day-old sparrow chick by feeding it scrambled egg. Sparky became a pet and remained faithful to his master’s call, even after release into the wild.

I once witnessed the drowning of a full sparrow trap. The females were frantic, the males resigned. I thought of them when TV showed the execution of the Ceaușescus: she defiant, he silent.

The Venerable Bede's citing of a sparrow, entering from the wintry blast to fly unnoticed above the king and thanes at their revels in the banqueting hall, then back into the night, is a powerful metaphor for life's chilling brevity.

The 2018 Bird of the Month calendar is available from carryakroyd.co.uk

‘Three days at home and I go mad’

Bird of the Month: The Fulmar - John McEwen