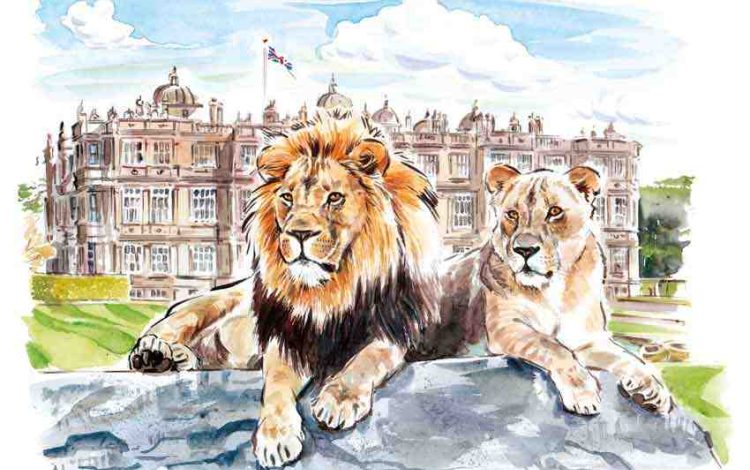 Noble Ambitions: The Fall and Rise of the Post-War Country House, by Adrian Tinniswood purports to offer us a counter-narrative to the familiar story of lost country houses. by Nicola Shulman

If you saw the film Greystoke: The Legend of Tarzan, Lord of the Apes you may recall these words, spoken by Ralph Richardson, as the older Earl of Greystoke, to the younger (Christopher Lambert). The young heir had been discovered living amongst a tribe of chimpanzees and was now removed to his Scottish estates and turreted ancestral abode.

The advice wasn’t followed by many aristocrats, as it turned out. The hundred years after 1875 saw a thousand great British houses destroyed, and many more sold along with their lands. Falling rents and rising taxes forced the Johnnys of this world to retrench and diversify their activities in such a way that, if Greystoke had become a movie franchise, we might have looked forward to Greystoke II: Lord of the Holiday Cottages, Greystoke III: Lord of the Organic Farm Shop and Greystoke IV: Lord of the Biomass Boiler.

This story, of the decline of the English stately home, has been analysed to exhaustion: sentimentally and comically by writers such as Evelyn Waugh, and sometimes with an indignation bordering on rage, as in the 1974 V&A exhibition The Destruction of the Country House. In that show’s final room, the Hall of Lost Houses, the organisers mocked up the collapsing façade of a fine old house, with each stone slab a photograph of a lost stately.

Noble Ambitions purports to offer us a counter-narrative to this familiar story.

Yes, many houses vanished, but many did not. They became schools and public buildings or were caught in free fall by the National Trust. Some had showman-like owners who went into partnership with the likes of Billy Smart and Jimmy Chipperfield. They repurposed animals from the big top and the zoo (never from the wild – though Longleat got ten lions from the set of Born Free in Nairobi). Some blew up the ballroom and moved the kitchen upstairs.

If this sounds like something you’ve heard before, it’s because Tinniswood’s idea of a counter-argument seems to be to tilt the old stories 180 degrees. He tells them not as stages of decline but as a tale of triumphant, upward flight, as the country-house-owning classes reacted with suppleness to changing times.

He does make a couple of novel points here. I liked the chapter about interior decorating, which shows how traditional, ‘grand country-house style’, which might appear to have been in place since time immemorial, was in fact another innovation of the Janus-faced fifties.

Tinniswood also touches on more recent types of owners, especially the symbiosis between toffs and rock stars – who tended, inter alia, to avoid the long 18th century in their architectural preferences, preferring early Tudor (Bill Wyman) or High Victorian Gothic (George Harrison.) It would be interesting to know why.

The mystery of this book is: why does it read as if time stopped at the time of the V&A exhibition? Since 1974, any number of events have affected the shape and prospects of large country houses.

They include, but are not limited to, Thatcherism, the Big Bang, Cool Britannia, the inrush of money from Russia and the Far East, the rewilding movement, Brexit, the contemporary art boom and, yes, the COVID-19 pandemic.

That caused an explosive demand for this type of house, as the rich have fled our pestilential cities with their chefs, nannies, Mandarin tutors, tennis coaches and art advisers in train.

There is so much of interest for Tinniswood, who writes wittily, to address. Why then is he dusting down these anecdotes emeritus about Marianne and the Mars Bar, Longleat’s lions, Georgie Fame, Debo Devonshire, John Profumo and all; when, yonder, before us lie such new developments as the Soho House country set and Beckingham Palace.

Do footballers live in country mansions? And, if so, what do they plan to do with them? Will the new owners, such as Leon Max, the Russian fashion mogul who bought Hawksmoor’s Easton Neston from Lord Hesketh, raise their children with a debt of loyalty to ‘the old place’, like Lord Montagu of Beaulieu, who said, ‘Whereas most people possess their belongings, I, paradoxically, belong to my possessions’?

Opportunity has practically flattened the door with knocking, but Tinniswood doesn’t appear to have heard it.