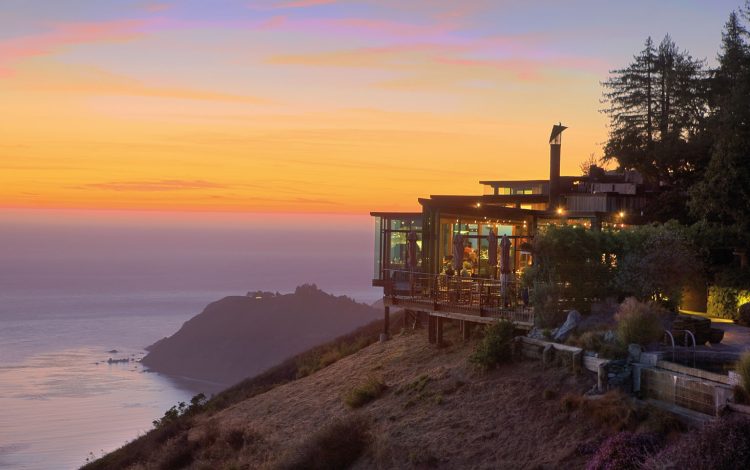 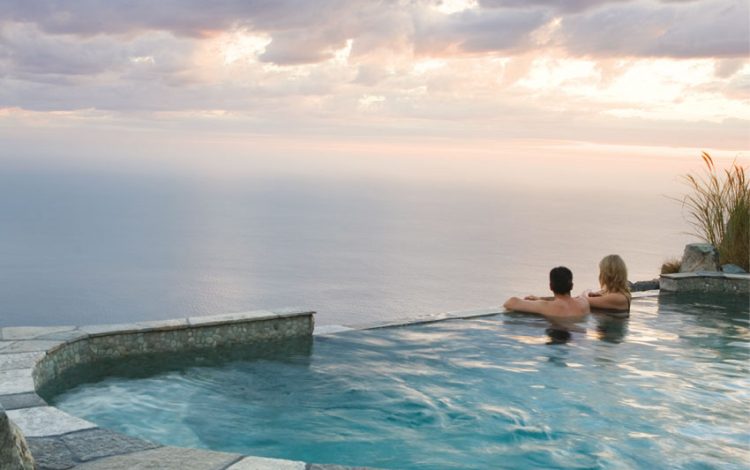 All that healthy living gives you a big appetite: the Sierra Mar Restaurant has gobsmacking views and menu
The Post Ranch Inn infinity pool, perfect for sunset- and eagle-watching
View Full Size
1
of 1

The iconic Pacific Coast Highway may be one of the world’s most popular road trips but apart from a few lumbering RVs and the occasional gleaming convertible, the road to Big Sur is mercifully free of traffic. With its friendly vibe, literary connections (Henry Miller and Jack Kerouac both spent time here) and rustic homesteads, Big Sur has plenty to offer the frazzled city dweller.

For that California feeling you really need an open-top. A friend has kindly lent me his 1975 Mustang convertible but there are plenty of places to rent your fantasy getaway car.

I’m on my way to the award-winning Post Ranch Inn for a much-needed spa break. At the entrance to the complex just outside Big Sur, a smiley attendant asks for my car keys and ushers me to a waiting golf buggy. This is very much an eco-friendly spa so grubby old internal combustion engines are kept well out of sight.

The resort itself is perched atop a narrow stretch of dramatic coastline with stunning views across the Pacific Ocean. The 39 guestrooms have been built into the landscape, cleverly complementing the soft curvature of the coastline. The grassy roofs act as a perfect camouflage. For those of an arboreal bent, the triangular-shaped tree houses allow you to doze amongst dense foliage high above the forest floor. My self-contained den is positioned on the edge of the redwood forest with far-reaching views of the misty beaches below (all rooms have ocean or mountain views). This is a place to relax and reconnect with nature so there are no TVs or flashy gizmos and the cabins have a rustic, understated charm. A homely bag of logs is hand-delivered to your door every morning and they will even build you a fire so all you need to do is strike a match.

I could happily have spent three days in my private hot tub gazing up at the night sky through the thoughtfully installed glass ceiling. The nearby   infinity pool is equally inviting and perfectly positioned for sunsets and eagle watching. But I’m not here just to gaze at the spectacular vistas. The past few months have been particularly trying and my aching muscles and joints are in dire need of attention.

The extensive spa menu may seem a little daunting at first but the attentive staff are happy to help. ‘Soaring’, an old-school hippy with greying, waist-length hair and a cheery, laid-back attitude (her mother was of Native American heritage) has suggested a brisk guided hike through the Santa Lucia Mountains. The air up here is divinely pure and the golden late-afternoon sun has turned the mountain peaks a rich, russet brown. The stress of city life soon begins to dissolve. Back at the spa, Soaring has recommended I try a Duet Massage, where you get four hands for the price of two. After an hour of perfectly choreographed pummelling, my lower back pain has all but vanished. I feel about 10lbs lighter and more relaxed than I can remember. As a reward, I treat myself to an hour of Sacred Touch, which includes some easy yoga postures, a spot of guided meditation and a very pleasing foot massage. Some of the spa treatments are a bit out-there and appear to hark back to hippier times when this stretch of coastline was a haven for hairy dropouts. I’m a bit of a sceptic when it comes to certain alternative treatments, especially ones involving gems and crystals. I’m even less convinced by the Vibrational Resonance session during which a ‘healer’ dangles tuning forks over various parts of my anatomy. The hour-long treatment is supposed to inspire ‘harmonic resonance’ but after twenty minutes, the whining hum of forks being randomly tuned in my ear begins to grate.

The Big Sur Jade Stone Therapy session is much more alluring and includes the laying on of hot rocks gathered from a nearby beach. The heat from the stones permeates deep into the knotted muscle tissue at the base of my spine and helps to loosen aching joints.

Like many men, I have shown scant regard for facial wellbeing over the years and consider moisturiser an exclusively feminine application. But according to the facial-treatment expert my parched, flaky skin is crying out for rehydration. She recommends the Coconut Paradise Facial, which smells as good as it sounds. The combination of virgin coconut oil, coconut milk and local honey certainly feels invigorating and by the end of the half-hour session, my cheeks have gone from used sandpaper to freshly powdered baby’s bottom. I’m told that with regular use this particular coconut concoction can improve skin’s elasticity and reduce the appearance of fine lines. But I have it on good authority that no cream on earth has the power to eradicate those telltale signs of ageing.

All this healthy living gives you an appetite so make sure you book a table at the dazzling Sierra Mar restaurant, perched precariously on a steep incline overlooking the ocean. The food is exceptional but the 180-degree vista is particularly gobsmacking, especially around sunset when the entire candlelit edifice appears to be floating above the fiery ocean. The four-course taster menu includes locally caught Morro Bay oysters and a sensational hunk of blackened cod. Don’t miss the honey-glazed ricotta fritters that dissolve as soon as they hit your mouth.

If the relentless pace of modern life is getting you down then the Post Ranch Inn and spa is the perfect antidote. After a couple of days, my nerves were noticeably less jangly. Time is more forgiving here too but be warned, the Post Ranch Inn is about as close to paradise as you’ll find anywhere on earth so dragging yourself away can be traumatic.

Rather than heading straight back to the hullabaloo of city life I recommend a tour of California’s myriad other spa retreats. Self-improvers should continue up the coast to the Esalen Institute where Sixties counterculture found a permanent home. This charming but slightly potty retreat still attracts an alternative crowd, offering more than 500 workshops yearly in areas such as personal growth, meditation, massage, ecology, spirituality and organic food.

From here it’s an hour or so drive inland to the thriving spa resort of Ojai, where stressed-out movie execs and screenwriters come to unwind. The luxurious Ojai Valley Inn and Spa is known for its exclusive Kuyam treatment, which combines the therapeutic effects of mud, dry heat, inhalation therapy and guided meditation. Kuyam means ‘a place to rest together’ in the language of the Chumash people who once inhabited the land around Ojai.

So if it’s Kuyam you’re after, coastal California remains the laid-back capital of the world. Just leave your baggage at the door.