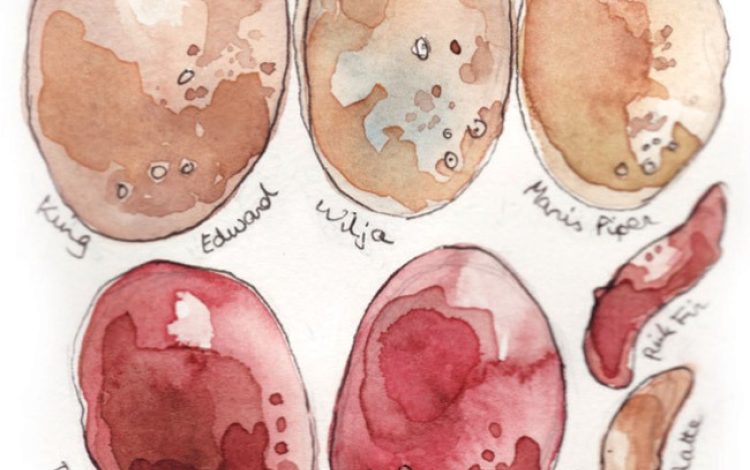 Magic stuff, the potato. A native of the high Andes which fuelled the Inca empire in Peru, Solanum tuberosum has made itself at home all over the world ever since it was tipped out onto the quays of Seville at the end of the 16th century.

The potato found itself particularly at home in the damp climate of northern Europe. In Ireland it was cooked in a three-toed pot that was heated in the embers of the fire. In England it was roasted beneath meat to catch the juices or cooked in its jacket in a cooling bread oven. In France, it was first partnered with butter and cream as the food of the rich; in Italy it went into gnocchi; in Germany and Eastern Europe it became popular in soups and warm salads; and in Spain it was partnered with eggs in a tortilla. Here are two of my own favourite tattie recipes.

Shred the potatoes using the largest hole in the grater. Salt lightly and transfer to a colander to effect the drying-out process which will deliver a crisp crust and tender middle. Heat a large knob of butter in a roomy frying pan. Drop tablespoons of the grated potato into the hot butter, sprinkle with salt and pepper, cover loosely and fry over a gentle heat till the potato is soft and has formed a crisp golden crust. Pat down a little, turn and leave to crisp on the other side. Serve with slices of apple fried in butter.

A creamy gratin of matchsticked potatoes with a salty layer of anchovies, named after its putative inventor, a Swedish preacher who sought freedom from temptation in the New World but continued to eat his favourite dish to punish himself for the pleasure he’d tried to avoid.

About 600ml single cream, heated to

Preheat the oven to 350F/180C/Gas 4. Cut the potatoes into thin slices then cut into matchsticks. Butter a deep gratin dish and layer the potato with onion and anchovies, peppering as you go and finishing with a layer of potatoes. Pour in half the hot cream, dot the top with butter and cover with foil. Bake for 15 minutes, then pour in the rest of the cream, adding milk if it’s not enough to cover. Replace the foil, turn the oven down to 300F/150C/Gas 2 and leave to cook for a further 50-60 minutes, until the potatoes are soft. Remove the foil for the last 10 minutes to brown the top. Serve with pickled herrings or gravadlax and pickled cucumbers with dill.