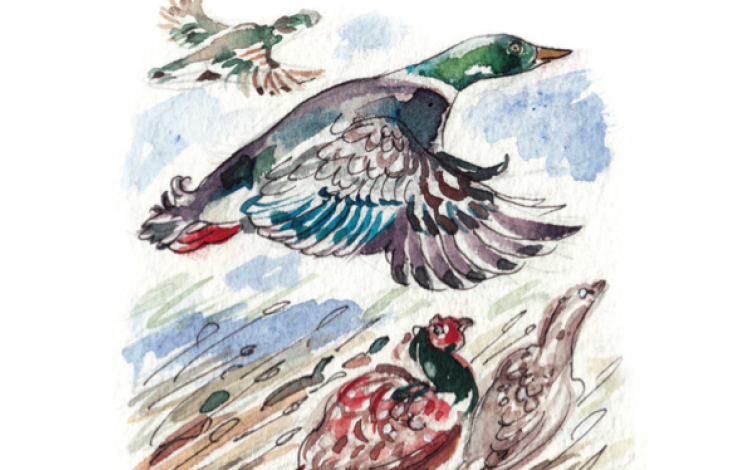 Good news for those of us who prefer our meat organic, free range and local. That old political bruiser Norman Tebbit’s Game Cooking, a best-seller in 2009, has just been reissued by Grub Street in time for the shooting season.

It’s a neat little hardback, with exquisite mezzotint illustrations of birds and beasts by engraver Debby Mason – part-time scallop-diver and contributor of a handful of fish recipes.

The idea for the book emerged from a conversation with his lordship’s butcher in Horsham. Both agreed that the problem with game is that people don’t know what to do with it – or, if they did, they’ve forgotten. Which has led to the absurdity of shipping most of our furred and feathered game to France and Germany, where they’re prepared to pay good money for what’s no longer available from their own forests and fields.

While the erstwhile Right Hon. Member for Chingford learned culinary basics at his mother’s knee, he came to family cooking later, when his wife was wheelchair-bound following the Brighton bomb. As is only to be expected of an RAF veteran, who served as Mrs Thatcher’s wingman and has a good few literary endeavours under his belt, this is a no-nonsense manual, designed to guide even a novice through the mysteries of game-cooking with wit and elegance.

When carving a pheasant, don’t be intimidated by the bird or bystanders: place it on its back on a wooden board, press firmly on the body with one hand, pull the legs away with the other, sever the joints with a sharp knife and carve the rest as you would a chicken.

There is no need to worry about lead shot as it rarely stops in the flesh and, if it does, it won’t poison you. And, most important, make sure your plates are really hot or no amount of boiling gravy will rescue the situation. For further and better particulars, buy the book.

A protective jacket of buttery crumbs pressed round a bird for roasting – a technique from Tudor times – works well with any game-bird. Apples, dates and dried or fresh apricots are alternatives for stuffing (I’d add quince). Save the duck legs for a stew, or fry with onion and herbs as an hors d’oeuvre. Serves 4

Preheat the oven to 230C/450F/Gas 8. Finely grate the zest of one orange and squeeze the juice. Slice the second into rounds. Butter the inside of the ducks with a nugget of butter and smear a little more round the outside. Stuff as many rounds of orange as seems sensible into the cavities.

Soften the rest of the butter and work into the breadcrumbs with the herbs and garlic. Add the orange juice and zest, and season with salt and pepper. Plaster the birds with the crumb mixture, then put them on a rack in a roasting tin. Cook for 30 minutes or so till done, but the breast should still be pink.