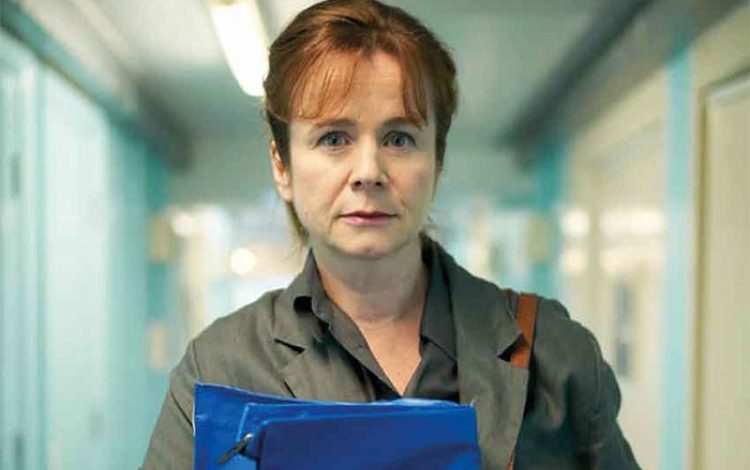 Why do female detectives have be dress badly in dark colours and ill-fitting jackets, asks Roger Lewis

I’m referring to the ‘teleshopping’ channels, which take over in the small hours. Nattering like gypsies down the market, unseen presenters attempt to sell opal rings not made of opals, paint-rollers, foot cream, blackout curtains and feather pillows containing ‘breathable eco-cell foam’, guaranteed not to smother asthmatics. As I’m usually too drunk at 3am to read my credit-card numbers, none or anyway little of the junk turns up here, but it is like experiencing time being killed.

Yet evening telly can be equally enervating, as if the programme-makers don’t expect viewers to have their wits about them. Did you see Keeping Faith, for example, where Celia Imrie pulled a gun? The Carmarthenshire world depicted was nonsensical. A solicitor who’d been to prison for fraud and who couldn’t manage elementary conveyancing hadn’t been disbarred; everyone lived in castles and expensive barn conversions with subtropical gardens, even a jobbing builder; a boy who had terminal brain cancer, and a one-per-cent chance of recovery, recovered – there he was at a beach barbecue. In the entirety of west Wales, there was a single police officer, poor old Sergeant Williams, pottering about on her own in a copse in long shot, with no back-up or forensics.

Eve Myles, as Faith, shouted and stormed around, always boiling over – smashing her mobile phone, banging the steering wheel, thumping on windows and slamming doors, ripping up flowers. Only a Welsh woman could be this excitable and vehement, as I know for a fact, having grown up with lots of them – but the twist was that, as Celia’s daughter, Faith was a Londoner, on the run from her gangster past.

Everyone has been irritated by the jargon in Line of Duty – a ‘chis’ is a ‘covert human intelligence source’, as if there are animal or Martian variants – yet what bugged me is the way female detectives dress badly, in ill-fitting trousers and black jackets, like unkempt lesbians deliberately refusing to make anything of themselves.

But then Emily Watson also remained in full, drab misery-guts mode in Too Close, the three-parter about a ‘forensic psychiatrist’ interrogating a bruised and battered ‘little lost posh girl’, who’d driven her car, containing two children, into the drink. Was Denise Gough mad and murderous, her amnesia faked, or mad and worthy of sympathy?

The idea that keeping up appearances requires monumental effort – the façade of yoga class, pony clubs and extra Mandarin; that screaming toddlers push a person to the limit; that each of us risks fracture: all this was promising. Also, the way patient and therapist began mirroring each other’s emotions had potential. Yet soon enough, Denise was setting fire to her cell with a purloined lighter and she and Emily were in the grounds climbing a tree and singing a duet.

In the documentary Grace Kelly’s Missing Millions, Grace’s millions weren’t missing at all. She’d formed a charitable trust, or else had given everything away to her children. The only real mystery wasn’t addressed: why such a Hollywood beauty ended up in exile with billionaire Rainier, who had the sex appeal of a Cesar Romero wax figurine, with his podginess and his dress uniform covered with bogus-looking Ruritanian medals.

Another daft one was Queen Elizabeth and the Spy in the Palace, about Soviet double agent Anthony Blunt, who, despite having what was called here ‘a mania for betrayal’, helpfully looted Hesse castles, concealing and removing evidence of the Royal Family’s Nazi sympathies.

‘Could these secrets hurt the Royal Family today?’ it was wondered. Was there collusion between MI5 and everyone else? I had not known Blunt was the Queen Mother’s third cousin, but otherwise the ground was thoroughly covered decades ago in Alan Bennett’s play A Question of Attribution.

When an elderly sailor died in Windsor in April, unleashing a bonanza fortnight for royal-correspondent bores, such was the crassness and mawkishness of the television coverage, the BBC received 110,994 complaints at the latest count. The public didn’t want wall-to-wall Prince Philip tributes; they wanted Gregg Wallace eulogising beetroot pickled in Japanese seaweed.

The châtelaine, cash poor despite owning thousands of adjacent acres, was very reluctant to allow ordinary people into the gardens – daylight being let in upon magic, so to speak. Lurking in a ruined orangery in this time warp were the son and daughter, as slender and vague as Waugh’s Flytes. The red-haired Lucas-Scudamore daughter in particular might be compared to a summer’s day.

Are You Being Served? turns 50 - Roger Lewis