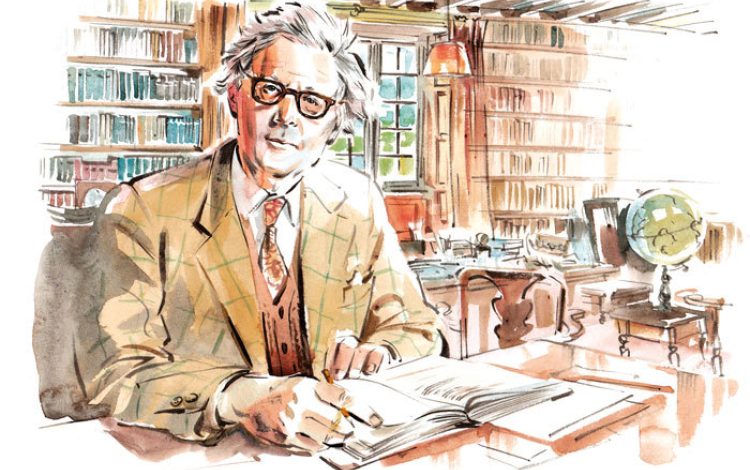 The Oldie is deeply sad to hear of the death of the historian Norman Stone at the age of 78. He was a great friend to the magazine. His last piece was in the May issue - when he sang the praises of Adam Sisman's new book on the historian Hugh Trevor-Roper and a bigamous, fraudulent, defrocked vicar.

The Professor and the Parson – A Story of Desire, Deceit and Defrocking by Adam Sisman

The funeral of Hugh Trevor-Roper at Christ Church in 2003, attended by seven duchesses, was also the funeral of an old Oxford.

He himself survives in print under his real name, but he died as Lord Dacre of Glanton, took that sort of thing seriously, and cut a figure in London clubland. The Last Days of Hitler (1947) is deservedly still in print; as an officer in intelligence, he had been commissioned to inspect the bunker, interrogated the witnesses, and wrote a classic, on the level of that great German film, Downfall. Having treated Hitler as a Gibbonian grotesque, he ever after counted as a German expert, consulted by Margaret Thatcher as to unification.

But there is a hole in the middle of this picture. What he really knew about was the 17th century. A publisher of genius, Richard Ollard, in the 1960s, commissioned The Fontana History of Europe, paperbacks on 50-year periods, and gave Trevor-Roper the Thirty Years’ War. He had his own 30 years’ war with it, and eventually handed the job (very well-done) to Geoffrey Parker. The other non-book was on the English Civil War.

Both of these subjects are so essential to an understanding of world history that you hardly know where to begin.

The Thirty Years’ War created the sovereign state and international law, and the English Civil War created Great Britain, parliamentary government, America and all that. Trevor-Roper was enormously well-qualified to write about these things – so why did nothing, apart from essays, appear? The answer has to be the writer’s old friend, displacement activity.

Adam Sisman’s splendid and intriguing book is a case in point. Trevor-Roper always had a tendency to waste time, no doubt from doubts about what he should say about his very grand subjects.

Was he on the Protestant side, or the Catholic? The answer was Anglicanism, but there too he had problems. I remember him saying that you should go through the paces without actually believing. That probably lamed him when it came to the historical gallop, of which he was otherwise so capable.

Any diversion was welcome and they were legion: from becoming a ballistics expert over Kennedy’s assassination to authenticating the preposterous Hitler diaries.

The Professor and the Parson is a fascinating account of another by-way: Trevor-Roper’s dealings with a small-time crook, who remorselessly exploited (there is not much, beyond respectability, to exploit) both academe and the Church of England.

Late in 1958, Regius Professor Trevor-Roper had a letter from a landlady saying that a married couple, called Peters, was being persecuted by the Bishop of Oxford. He agreed to see Peters, who complained that he was being prevented from officiating at a bells-and-smells church, and that the bishop would probably supervene with his college, Magdalen, where he had gained a First in History.

Peters presented excellent references, from impeccable referees. All of this in pursuit of a postgraduate degree, called a B.Litt which Oxford then preferred to the PhD – a German-American torture which entailed knowing more and more about less and less.

Peters had managed to register at Magdalen, but problems over his undergraduate record (this time a London First) got in the way.

When Magdalen got letters from bookshops and libraries about unpaid bills, Peters prevaricated, playing the sickness game. The president of Magdalen was a peppery old Scotsman who chased this up, and discovered that the whole business was fraud.

Not even Peters’s date of birth was known until, in 2017, Sisman discovered his pauper’s grave in Norfolk. By then, Peters had gone through all the Anglo-Saxon countries, married six times (twice bigamously) and several times been deported.

He had served time twice, all the time bobbing up with charm and an Oxford accent, passing himself off to academic institutions that were terribly short of qualified manpower, so that, if he turned up in Canada representing himself as an Oxford First in Theology, they immediately hired him. One post lasted more than a year; most collapsed much sooner.

Though very obviously a bad egg, he was supported by two Anglican grandees: Patrick Collinson, Regius Professor at Cambridge, and Gordon Rupp, Professor of Church History at Manchester, who let Peters into a PhD programme and supported him with testimonials.

Meanwhile, Peters cunningly churned out articles and reviews on religious history. His CV at first sight must have looked magnificent, with well-known referees and longish lists of achievements in various places. When I get that sort of thing in perfect form, I am inclined to throw it away.

Adam Sisman might have asked how on earth was this all paid for? Peters impressed with his dog collar and huge library, assembled at the expense of innocent booksellers. There must have been government grants for research.

Though physically unimpressive, he appealed to women. And adopting a grand accent must have won tricks in the colonies.

On and on he went, with small-time deceptions, while the fascinated Regius Professor of Modern History maintained a huge file on him.

This is a splendid book – even a little classic – and, if at nearly 78, I can give a particular endorsement, it made insomnia worthwhile. But his great rival, A J P Taylor, would not have spent time on this sort of thing, and he joins any anthology of 20th-century English writing. Will Trevor-Roper?