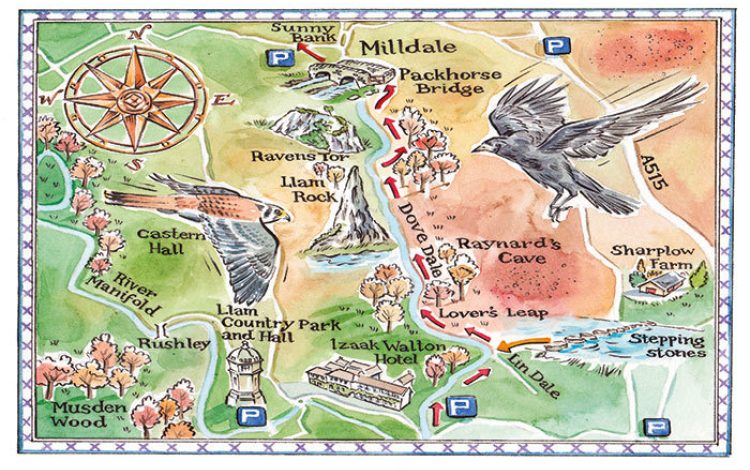 A storybook stroll is one that meanders beside a singing stream and into an enchanted forest. Ideally there are caves, cliffs, abundant wildlife and, at some point, an unexpected turn, where you have to take a chance, or a leap in the dark.

The leap on this fairytale walk up Dovedale comes at the stepping-stones that cross its tinkling, small river.

They are the most obliging stones: flat-topped, regular and well-placed. But there’s still an element of discomfort in midstream, as a small gaggle of sightseers look on. And the first time I encountered these stones, after a winter deluge, carrying a toddler’s buggy with a group of children, crossing them was a genuine trial. One child slipped into the icy water and, some years on, the walk is still a touchstone of comic Sunday suffering for our group of friends.

I tend to avoid tourist hotspots – honeypots, my crowd-averse parents used to call them – but places such as Dovedale, set in the Peak District, our first National Park, are deservedly popular. They deliver an intensity of wildlife and scenery, crammed into an easily digestible package. It’s landscape fast food, but nourishing; everything a tripper could desire in a single day.

On a quiet autumn morning, I walked from the south, with the stepping-stones an entry point into the valley (equally, on a north-south one-way route, they can be your grand finale). On this occasion, I crossed the 18 stones without any drama, although one rock had shifted out of line, like a snaggle tooth, and the gentleman ahead of me, stick in hand, required assistance.

Beyond rose the steepening sides of the valley, dark alder by the water, ash and sculptural old hawthorns clinging, improbably, to the limestone scree. One ash, anchored in the grey rock by four supportive roots, resembled a person struggling to get up after a picnic. Beyond the billiard-green sheep-grazed fells, a crow and a kestrel took to the grey skies. Cruising above them, a thrilling speck of fat-winged falcon – a peregrine prospecting from another realm.

The ash woods did not provide spectacular autumn colours – not this year, anyway – and some were suffering ash die-back. Trunks marked with red paint are being felled, because so close to the busy path they are considered a risk. But not all are ailing. One particularly black autumn leaf turned out to be a dog-poo bag hanging from an ash bough.

The River Dove was trout-brown, and pebbles of froth shone silver as they were carried downstream. Ahead, a big mound of froth caught on a fallen ash looked like a Bichon Frise. The path climbed up the valley side as Dovedale narrowed into a gorge. There were stone steps built by Italian prisoners of war; so we could all the more easily enjoy the limestone formations from the heights of Lover’s Leap. Further on were spectacles galore: the pinnacle of Ilam Rock Reynard’s Cave, and a venerable packhorse bridge at Milldale.

Such well-peopled places attract well-told stories too, which are smoothed over like the stepping-stones. A young woman reputedly jumped from Lover’s Leap because her lover had been killed in the Napoleonic Wars. She was saved when her dress was caught in the branches of a tree – and she got home to hear that her beau was alive after all.

I don’t believe it but I believe in this landscape’s ability to entertain, amaze and revive us. On my return to Ilam, I encountered a dipper virtually under my feet, unbothered by the crowds admiring its river. It bobbed plumply, like Boris before the Queen, and I felt like dipping my head in return, to salute the genius of this place and all its denizens.

The classic walk is Milldale to Ilam or vice versa: three miles each way. Follow the steps and signs. Car-parking at both ends – so it can be a one-way walk if you are two in two cars. Refreshments at the car park at Ilam.