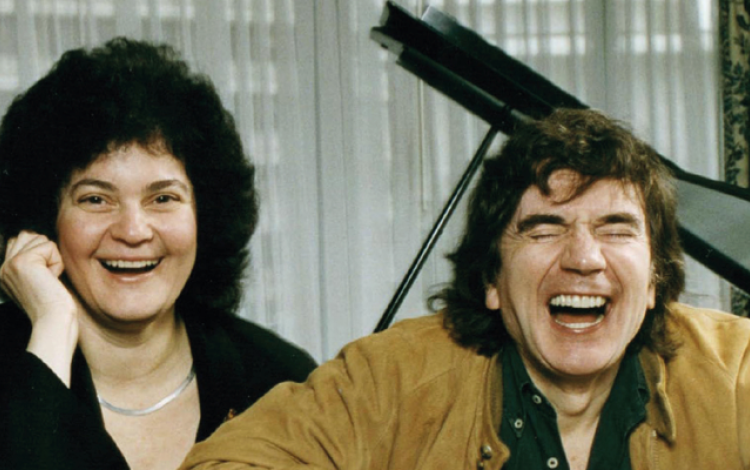 The actor and theatre director Jonathan Miller recently died, aged 85. Here William Cook writes about meeting the classical musicians who took in and revived his Beyond the Fringe friend, Dudley Moore

Jonathan Miller recently died. William Cook meets the classical musicians who took in and revived his friend from Beyond the Fringe, Dudley Moore

It is 18 years since Dudley Moore died, aged just 66, but the mere mention of his name is still guaranteed to raise a smile.

Sure, Peter Cook cracked the best jokes in Not Only… But Also, but it was Dudley’s clowning that made Pete & Dud so irresistible. Without Dudley’s warmth and bonhomie, Britain’s greatest double act would have been too clever by half.

Everyone loved Cuddly Dudley, the Dagenham ‘sex thimble’, which is why the story of his final years seems so cruel. His fourth marriage had broken down, the film offers had dried up, and he contracted a horrid degenerative disease, progressive supranuclear palsy (PNP), which eventually killed him.

The great consolation of his last decade was his close friendship with Rena Fruchter and Brian Dallow, a kind American couple who helped revive his musical career and nursed him through his final illness.

Rena and Brian are both classical musicians. Rena was born in Philadelphia, and studied in London at the Royal College of Music before returning to the US. Brian was born in Surrey, went to America on a graduate scholarship and never came back. They met at Brandeis University in Massachusetts and had four children.

I first met them in 2002, not long after Dudley died. Peter’s widow, Lin Cook, had asked me to compile a book of her late husband’s best sketches.

A lot of Peter’s best sketches were written with Dudley, and I soon learned that Dudley had left the copyrights in these works in Rena’s care. He’d done this to help fund the charity Rena runs with Brian, Music For All Seasons, which takes music into places where people are confined, such as prisons and hospitals; their latest project is a songwriting programme with military veterans. As we worked together on that book (Tragically I Was An Only Twin – the title of Peter’s abortive autobiography) and its sequel (Goodbye Again – the title of his ITV series with Dudley), I got to know Rena and Brian pretty well. I went to stay with them in New Jersey, in the house they’d shared with Dudley. This year, I met up with them again on one of their frequent trips to London. Over dinner at my home in Ruislip, they told me about their relationship with this gifted and enigmatic man.

Rena first met Dudley thirty years ago when she was working as a music columnist for the New York Times. Dudley was playing a piano recital with the New Jersey Symphony Orchestra. She’d been sent to interview him. Dudley had always been a brilliant pianist but, since he became a star in Beyond The Fringe, classical music had played second fiddle. Now he was trying to revive his classical career. It was clear he had some catching up to do, but Rena enjoyed the concert. Dudley liked Rena’s article. They stayed in touch, and became good friends. They never discussed Dudley’s personal life. They hardly ever discussed his acting. All they talked about was music, which was how Dudley liked it.

Raised on a council estate in Dagenham, Dudley, who was born with club feet, had gone on to win an organ scholarship to Oxford University. He was working as a jazz musician when, in 1960, he was booked to appear in Beyond The Fringe. A show that was scheduled for a brief run at the Edinburgh Festival transferred to the West End, then on to Broadway. Out of that show evolved his partnership with Peter Cook, on TV and in the cinema, and then a few years as an unlikely Hollywood sex symbol.

Now, with his film career on the wane, he was returning to his first love, classical music. For him, Rena’s interest in his musicianship was a breath of fresh air.

Dudley’s relationship with Rena was platonic, and her husband soon became an equally close friend.

‘Musically, he had a lot in common with Brian,’ says Rena.

It was remarkable how much they shared. They both came from the London suburbs, they’d both been gifted musicians from an early age, they’d both felt stifled by the British class system, and they’d both settled in the US. They even had musical friends in common – they’d both worked with John Dankworth and Cleo Laine.

Dudley suggested playing the Grieg piano concerto as a fundraiser, at Carnegie Hall. Rena travelled to Dudley’s home in LA to rehearse with him, playing the orchestral part on one of his three grand pianos.

‘As a jazz musician, he was superb,’ says Brian. ‘I was always very jealous!’

After years of neglect, his classical technique was rather rusty. Rena helped him make up for lost time.

‘He pulled it off,’ she says. ‘He was determined. He really worked.’

The concert was a hit, which led to lots more bookings. They toured the US and Australia together. Finally, Dudley was back doing what he’d first set out to do.

Around this time, he started experiencing a strange stiffness in one of his fingers. He was also becoming increasingly unsteady on his feet. The tabloids assumed he had a drink problem (even though he’d never been a big drinker), inviting invidious comparisons with Peter Cook, who’d died of a gastro-intestinal haemorrhage, brought on by heavy drinking, in 1995.

No one could work out what was wrong with Dudley and he found no respite in his domestic life. His latest marriage (to Nicole Rothschild, half his age) had always been stormy. Now things had gone from bad to worse.

In 1997, Dudley asked Rena and Brian if he could come and stay for a month or two, to sort out his health problems and get away from Nicole for a while. He ended up living with them for two years. There was no one else around to give him the support he now required. ‘He didn’t have many close friends,’ says Rena. ‘He was part of our family by then.’

Dudley loved spending time with Rena and Brian’s children and grandchildren. He’d never been that close to his two sons. Here, he was like a favourite uncle. It was a relationship he relished.

‘He wasn’t Dudley Moore anymore – he was just Uncle Dudley,’ says Brian. ‘We were the kind of family he’d never really been able to have.’

Dudley was happy there, but his medical problems prevailed. It took more than a year to find out what was wrong. Eventually a doctor in New Jersey diagnosed PSP. There was no cure – there wasn’t even any effective treatment. He’d lose his co-ordination; then his motor skills; then his ability to speak. Finally, PSP would impair his breathing, resulting in pneumonia. At best, he might live another eight years. He lasted four.

Dudley spent the next year living with Rena and Brian in Plainfield, a New Jersey town. He felt more at home there than in LA.

‘The area reminded him a little bit of England,’ says Brian. The climate was more like England; the architecture, too. His home life in LA had been superficial and chaotic. Rena and Brian’s home life was more humdrum, but far more nurturing and rooted.

Dudley’s co-ordination grew worse and worse. One day, he lost his balance and toppled over the banisters. He could no longer manage the stairs. Luckily, the same day, a bungalow next door came up for sale. Dudley moved into this ‘ranch house’ straight away, with his grand pianos. He still came round for meals, until his illness rendered him housebound. He died in his New Jersey home in 2002, surrounded by his adoptive family.

‘He didn’t want to go back to LA – he wanted to stay in New Jersey,’ says Brian.

He was buried in their local cemetery, an ocean away from Dagenham.

Rena and Brian still live in the same house today. It’s not a grand house, but it’s full of character. The living room is given over to Dudley’s grand pianos. It’s a pleasant place to live, but there’s nothing swanky about it. It’s just a nice house in a leafy street in a quiet commuter town.

So what sort of a man was Dudley? What was he really like?

‘He was very serious,’ says Brian.

‘He was a deep thinker,’ agrees Rena. ‘He liked literature – he liked discussing serious topics, even though his image was light and frivolous and trivial. I think that was partly why his friendship with our family developed. He wasn’t a celebrity to us.’

So what would have become of Dudley, if celebrity hadn’t intervened?

‘He probably would have ended up being a professor of music,’ says Brian.

But would he have been any happier? Rena’s not so sure.

‘He liked to have a lot of variety,’ she says. ‘He was up for adventure.’

Dudley’s life was an incredible adventure – the boy from Dagenham who conquered Oxford, Broadway and Hollywood, and ended his days in a dormitory town in New Jersey, with an American woman who became one of his closest friends and an Englishman who lived the quieter life that he might have led.

William Cook is author of ‘One Leg Too Few – The Adventures of Peter Cook and Dudley Moore’ (Random House). He discusses Pete and Dud with Elisabeth Luard in this month’s Oldie podcast