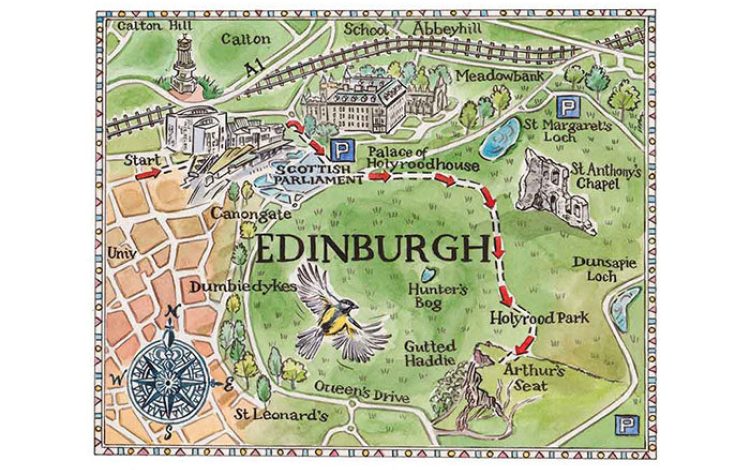 Every fine city has a viewpoint, and every good walk offers a bench – but no other British city has anything quite as excellent as Arthur’s Seat.

When you tire of London, and of life, you can refresh your sense of the place by taking a ride on the London Eye. When you grow weary of the buskers on Canongate – including an eagle owl called Harriet with opalescent orange eyes and a neck that swooshes 180 degrees to eyeball American tourists getting to know ‘Edinborrow’ – you can saunter past the pleasingly modest Holyrood, and up the big green rock beside it.

I was fortunate enough to have a local companion for the afternoon, the poet and nature writer Kathleen Jamie, who grew up on Edinburgh’s fringes and has watched the city evolve. She told me of Edwin Muir, who in the 1920s likened the crowds on Princes Street to a platform for a train that never came in – ‘And look at it now,’ said Jamie, as we observed the swelling crowd.

Like other attractive cities – Bath, Dublin, Amsterdam and Venice – Edinburgh is love-bombed by tourists like me. Locals complain they have no neighbours any more; just Airbnbers holding pop-up parties. As we ascended one of a wiggling maze of paths, I asked about the tower cranes hanging around a street corner like gangly teenagers.

‘They are building a grotesque new hotel, already known locally as the dog turd,’ explained Jamie. ‘That’s all we’re getting in Edinburgh – hotels, hotels, and student accommodation. There’s no actual housing going up.’

Most of the occupants of every new hotel seemed to be heading up Arthur’s Seat: Chinese teens in box-fresh, white trainers, young lovers in tracksuits and urban explorers kitted out for Everest with GoPro cameras fixed to their foreheads.

The broad, rocky path blushed pink, and the basalt was shiny from the tread of so many unsuitable shoes. Mine were unsuitable too, but this was mountaineering city-style.

Then the path turned a corner and suddenly all we could see was the green hill ahead, and all we could hear was silence, except for the chirp of small birds in the gorse and broom. Every ten minutes or so, the cloud expelled a little rain; that’s just what Edinburgh does.

When we reached the – bench-free – summit, I drew breath: 800ft goes a long way in a city and I’d half-forgotten that Edinburgh was on the coast.

‘Every city should have a sea, and an edge,’ nodded Jamie, approvingly.

The Firth of Forth glowed with a hint of turquoise under low, grey cloud. To the far east stood Bass Rock and other islands; to the west, rolling green hills. Closer in, the stanchions of Hibs football stadium, painted in the team’s green. Closer still, the graceful squares of the Georgian New Town and the tight-packed stone tenements of the Old Town, more riverine in shape.

Not all our fellow 20 summiters were admiring the view. ‘Shoot!’ shouted the GoPro explorer to himself. He was instructing his phone to take the selfie. ‘Shoot!’ The phone couldn’t hear him in the breeze. Or perhaps it was waiting for a ‘please’.

I’m not sure that every city-dweller appreciates being put in their place. Because that’s what a good viewpoint does. The city shrinks to concrete smudges surrounded by brick smudges and asphalt traces below an all-conquering sky. Its alleys and ant-bustle suddenly look no more meaningful or moral – and probably less – than a termite mound or a hive of bees.

How nice that the busy bees in Holyrood can avail themselves of Arthur’s Seat at any time of national crisis. Would the Westminster Parliament be more effective if its denizens had a nearby mountain instead of the London Eye?

Route-finding on this walk is easy: head east along Canongate, past Holyrood, and follow the tourist trail upwards