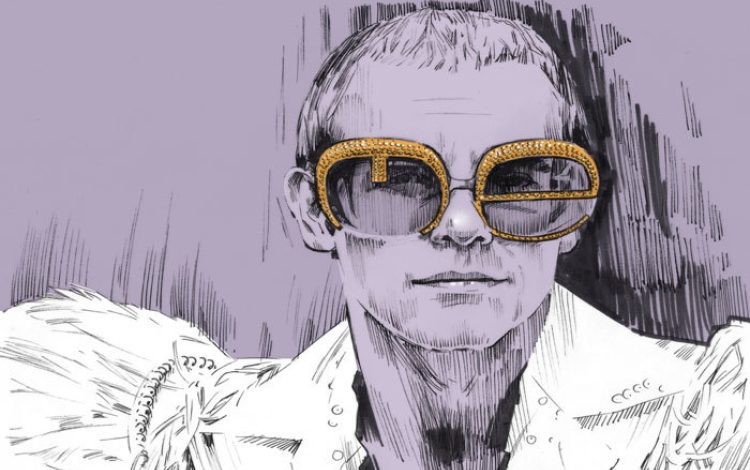 The year is 1976 and we find Elton John at his home in Windsor, a sumptuous mock-Georgian pile full of Magrittes and brass palm trees. There is a football pitch in its capacious grounds and one of the rooms has a replica of Tutankhamun’s throne. Elton recently shattered the world’s live performance record by playing to 110,000 people over two nights at LA’s Dodger Stadium, with Cary Grant backstage, Billie Jean King adding backing vocals and California’s most famous used-car dealer arriving onstage with a lion.

When he awakes in the mornings, the uncontrollable showman plays a deafening fanfare through a vast speaker system in the house and garden to advise of his imminent arrival.

And if, understandably, you are wondering why anyone could possibly crave this level of success and attention, the answers lie in the opening pages of this self-lampooning and outrageously effervescent memoir.

An only child in suburban Middlesex, he lived a life characterised by ‘glowering, miserable silences’, his parents locked in a loveless marriage. Sternly insisting that celery should be eaten only noiselessly and school blazers removed a certain way, his father regarded ‘any display of emotion, other than anger, as evidence of a fatal weakness of character’ and loudly disapproved of his son’s musical ambitions. His mother’s notion of potty-training was to wallop him with a wire brush and, if he was constipated, ‘she would stick carbolic soap up my arse’. Shy and in desperate need of confidence, he spent his childhood ‘being as invisible as possible’ to avoid provoking his father’s rage or one of his mother’s moods. So when success and attention arrived, his appetite for both was limitless.

Is it any surprise that this book reads like one gigantic, joyous, heat-seeking celebration of his escape and complete transformation? And how rare it is to find a rock star this self-aware, not just of his motives but of the perception of his public persona. He knows his rampant narcissism and serial bitching are as winningly absurd as the enthralling drama of the world he created, and his ghost-writer, the Guardian’s pop critic Alexis Petridis, maintains a breathless pace and sublime level of comic detail. Keith Richards onstage these days looks like ‘a monkey with arthritis’ and Madonna ‘a fairground stripper’. Elton himself appears to have ‘a dead squirrel on my head’ when trying out a ‘weave’ after a spectacularly unsuccessful hair transplant (he now wears a wig and delights in revealing the deathless shame of once stepping out with it on the wrong way round).

Several elements make this one of the best, most compelling and consistently funny rock memoirs available, not least its delicious bombardment of high-octane anecdotes: a night playing charades with Bob Dylan (who was hopeless, apparently) ends so drunkenly that Elton pelts him with oranges; he instructs his management to shoot down a giant promotional balloon advertising the face of his old friend and rival Rod Stewart; Elvis Presley is ‘overweight, sweating’ and has ‘expressionless black holes where his eyes should have been’; and, at a dinner party, Sylvester Stallone and Richard Gere both think they’ve won the affections of the newly single Princess Diana and have to be prevented from coming to blows.

Beyond the sphere of his fellow revellers, though, is a fascinating insight into his world-conquering stagecraft, much of it copied from Winifred Atwell and Little Richard; you can feel the addictive thrill of being able to manipulate a crowd reaction. And underlying it all is an extraordinary level of honesty – the self-mocking details of his two half-baked suicide attempts, his astonishing naivety about sex (‘a virgin until 23’), the heartbreak of his love affairs, and the no-holds account of his drug and drink addiction, which he addresses soon after waking with a monumental hangover to discover he has just bought a tram which is being shipped from Australia to be dropped onto his lawn by Chinook helicopters.

This honesty is clearly inherited. His mother returns at the end of the book, estranged from her long-suffering son (who now has two of his own by surrogate birth), and is asked by a tabloid whether she misses seeing Elton’s family.

She doesn’t, she says tellingly. She ‘never liked children’.