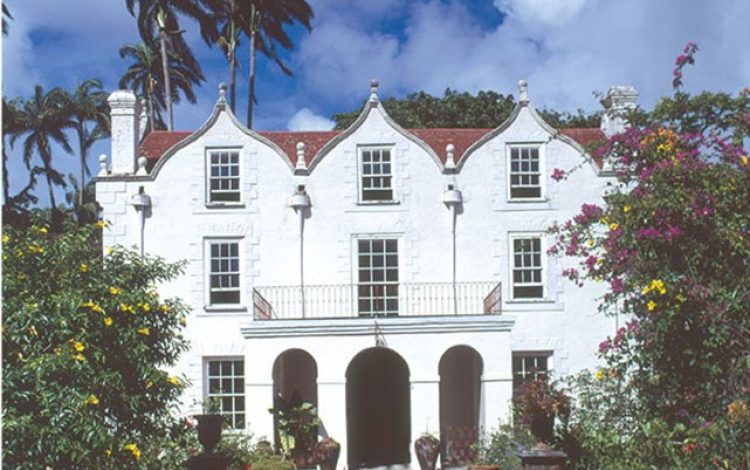 On 30th November last year, in front of Prince Charles, Barbados replaced its head of state with a president – Sandra Mason.

Still, lots of the island’s 17th-, 18th- and 19th-century British buildings, great and small, not only survive but thrive. What a huge pleasure it is to discover them all.

Patrick Leigh Fermor was spot-on in The Traveller’s Tree (1950): ‘In nothing is the illusion of England so compelling as in the parish churches of Barbados. They stand alone in the canefields, their battlemented belfries and vanes and pinnacles appearing over the sheltering tops of clumps of trees.’

Despite the odious nature of slavery, apparent when these churches were built, many of them are wholeheartedly glorious.

So deep is the pleasure of coming upon them that they quite sear themselves into your senses. Today, when seeing a church in England, I have many a time actually found myself momentarily confused as to whether I had suddenly arrived in the Caribbean! Few sights are as magical as these buildings found so far from home, yet so English in their every detail.

Take the Gothic Parliament of 1872, with its assembly of stained-glass windows of the English monarchs – from James I to Queen Victoria – alongside, lo and behold, Oliver Cromwell. There is only one other such assembly like it in the world – to be found, if you please, in Rochdale’s Town Hall!

Thanks to these delights, the Barbados National Trust was created in 1947 ‘to preserve the unique heritage of our island home, be it historic buildings, places of natural beauty or the island’s flora and fauna’. It has triumphed to this day. HURRAY! It was founded by Ronald Tree, who built the exquisite neoclassical villa Heron Bay on the seashore.

The island was at the forefront of the British Caribbean from the start. It was the first place to establish the industry of sugar and slaves. For 20 riches-soaked years, it was the only West Indian supplier of sugar to a Europe that was forever licking its lips with longing for the sweet stuff. Barbados was therefore the first island to breed the Caribbean ‘plantocracy’, monied men whose show of voluptuous opulence often excelled that of the grandees of the motherland. Fine buildings proclaiming their importance were bound to be the result.

In the humid heat of the Caribbean, the English lived in a manner that bordered on sheer lunacy. Determined literally to keep the home fires burning, they built fireplaces into their brick-built houses and put glass windows – not considering there was such a thing as shutters – into their low-ceilinged homes. The 17th-century historian Richard Ligon complained that with the low ceilings he could hardly keep his hat on!

What treasures survive on the island. Take the 1687 marble bas-relief of Norfolk’s King’s Lynn – ‘Lynn Regis’. It’s a delicately carved townscape, crammed with an assembly of buildings worked in fine and historically interesting detail.

This bas-relief originally hung in the front hall of Holborn, one of the earliest houses in Barbados, built in the early-17th century. In 1958, it was demolished to make way for the building of Deep Water Harbour – the Port of Bridgetown, today the heart of the island’s trade.

The marble was rescued and is now safe and sound in the care of the exemplary Barbados Museum and Historical Society, in the building that was originally the Garrison’s military prison. Built of the palest yellow brick and grey stone, it was designed in the early-19th century and extended in 1853. It was taken over as ‘the home of Barbadian culture and heritage’ in 1933 and has since amassed a vast collection of some 5,000 artefacts dating from prehistoric times to the 21st century.

The most gratifying painting in the museum is the anonymous portrait of the planter Seal Yearwood and his servant. It’s a quite glorious glimpse of an 18th-century grandee of the Barbadian plantocracy. With a long clay pipe at the ready, he sits with buttoned, breeched legs, fine white stockings and buckled shoes. With a look on his face of settled and supreme confidence, he is attended by a liveried servant with a gigantic glass of rum on a silver salver.

From the earliest days, Bridgetown was an architecturally pleasing town. In 1813, a monument to Lord Nelson was put up in Bridgetown’s Trafalgar Square (renamed National Heroes Square in 1999), a full 27 years before one was put up in London’s Trafalgar Square. In England, Nelson’s somewhat coarse likeness was sculpted in stone by the little-known Edward Hodges Baily. In Barbados, the refined features of Nelson were created in bronze by Sir Richard Westmacott – one of the greatest sculptors of the day, known as ‘the first castor of brass in the kingdom’.

The finest house in Barbados is Farley Hill, built in the 17th century. It had collapsed but was saved from oblivion when it was chosen as the setting for Island in the Sun (1957), starring James Mason and Harry Belafonte, based on the 1955 Alec Waugh novel. For two months in 1956, the crumbling old palace experienced a transformation as 300 people converted it into a mansion suitable for a sugar baron. A complete new gallery and stairway were constructed to face the lawn.

Island in the Sun gave a short yet sensational reprieve to Farley Hill. Today, the ruins are enjoyed by one and all. There can be few houses to have plunged through such a rollercoaster of such fortunes and misfortune.

Of the three Jacobean ‘manor houses’ still standing in the Americas and the Caribbean, two of them are in Barbados, while in America there is only a lone example! St Nicholas Abbey in Barbados is the most beautiful. The other survivors of the period, Bacon Hall in Virginia and Drax Hall in Barbados, are somewhat plain and severe.

St Nicholas Abbey, with its festive forms, seems to be positively dancing with delight at its survival on this tiny island in the Caribbean. Not only has it held on, but it has recently undergone a masterful restoration, as befits one of the most important buildings in what was once the British Caribbean. Following the maxim ‘Curly early, straighter later’, the house’s curvilinear Dutch gables date the house as having been built around 1650. A grandfather clock, made by James Thwaites of London in 1759, was brought to St Nicholas Abbey and has stood halfway up the stairs ever since.

When, in 1851, the owner Laurence Trent Cave was married, the ceremony was performed by the Very Rev W C Breton, Dean of Jersey and father of the actress Lillie Langtry (1853-1929).

I met Colonel Stephen Cave, the last of the family to live on the plantation, always valiant in his determination to maintain the place. He told me a story of how, many years before, he had gone to a dinner in Government House, given in honour of Princess Alice of Athlone by Sir Arleigh Winston Scott, the first native Governor of Barbados. My father, Tony Lambton, was there with Anthony Eden, his friend and fellow MP, who lived a good deal on the island.

When the time came to leave the dining room, who should be given precedence? Princess Alice, the granddaughter of Queen Victoria, or the descendant of an African slave? After no more than a second’s hesitation, Princess Alice gave a deep curtsy to the Governor and begged that he leave the room before her.

In 2006, St Nicholas was bought by the Barbadian architect Lesley Warren and his wife Anna, who have since been restoring, to fantastical effect, every inch of the place. The surrounding fields are to be extended and prepared for more sugar cane. A cottage industry in sugar has been established, resulting in the entrancing production of the finest brown sugar as well as St Nicholas Abbey Blackstrap Molasses and St Nicholas Abbey Barbados Rum, their labels emblazoned with a painting of the house.

That this 17th-century English building in the Caribbean should have been given such a new and vibrant 21st-century life is extraordinarily pleasing.