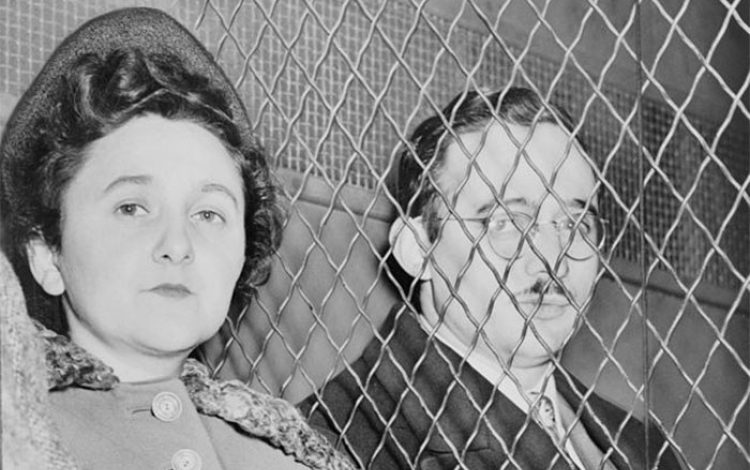 Julius and Ethel Rosenberg, separated by heavy wire screen as they leave U.S. Court House after being found guilty by jury, 1951. Roger Higgins, photographer from "New York World-Telegram and the Sun"
View Full Size
1
of 1

Andrew Lownie applauds Anne Sebba's focus on Ethel Rosenberg. She sees the tragedy as a domestic drama of betrayal and partly as an American equivalent of the Dreyfus case.

A few minutes after her husband, Julius Rosenberg, was executed, Ethel Rosenberg was executed, too, on the evening of 19th June 1953, for passing atomic secrets to the Soviet Union. The couple left two sons, aged ten and six.

The story of the Rosenbergs and the wider spy ring has been told many times before. What Anne Sebba has done in the first sole biography of Ethel in 30 years is to humanise the story behind the headlines, which she sees partly as a domestic drama of betrayal and partly as an American equivalent of the Dreyfus case.

The Rosenbergs are the only Americans put to death in peacetime for conspiracy to commit espionage, and Ethel the only American woman executed for a crime other than murder. No other convicted member of their spy ring received a death sentence.

The subtitle of the book is A Cold War Tragedy and it is clear where Sebba’s sympathies lie. She feels that Ethel’s death was a huge miscarriage of justice and she became not just a pawn in a dysfunctional family situation but also a victim of the wider American propaganda war against the Soviet Union.

The arrest in 1950 of Klaus Fuchs, a German physicist at Los Alamos, led to Ethel’s husband, Julius (codenamed ANTENNA and LIBERAL), and her brother, David Greengrass. Both men betrayed Ethel – Julius by refusing to confess his own guilt, thinking he could brazen it out on behalf of both of them, and Greengrass by testifying against Ethel in order to reduce his sentence and save his wife, Ruth.

Sebba has skilfully taken a well-known spy case and breathed fresh life into it, not particularly with new material, but by examining it with 21st-century sensibilities. Her book is about the human cost of the Cold War, rescuing one of its victims and fleshing out the wider story of a young woman determined to better herself and improve the lot of others.

It’s a book about fractured family relationships – Ethel’s mother supported her son over her daughter – and the misuse of power. The FBI admitted they had insufficient evidence to issue proceedings but, in what was called the ‘lever strategy’, hoped pressure on Ethel would force Julius to confess.

The carefully picked jury – those against capital punishment were excused service – did not believe Ethel would be executed, even if found guilty, and that anyone testifying against their sister must be telling the truth.

Sebba sees it partly also as a story about Jewish identity and prejudice – the judge, both prosecuting attorneys, the defence team and the Rosenbergs were Jewish. But one side, the ‘good’, assimilated, patriotic Jews, were pitted against the Lower East Side Jews, whose loyalties were more suspect.

The execution of the Rosenbergs became a cause célèbre and many continued to believe that both had been unfairly executed. The publication of the hitherto unknown Venona decrypts – Soviet codes broken by the Americans – in 1995 confirmed that Julius had run a spy ring for almost a decade, but the evidence against Ethel was limited to a text dated 27th November 1944:

Your 5356. Information on LIBERAL’s wife. Surname that of her husband, first name ETHEL, 29 years old. Married five years. Finished secondary school. A FELLOWCOUNTRYMAN since 1938. Sufficiently well developed politically. Knows about her husband’s work and the role of METER and NIL.

It is almost certain that the judge had been secretly apprised of the Venona evidence and that had shaped his judgment and the rejection of subsequent appeals. Sebba is persuasive about Ethel Rosenberg’s punishment being disproportionate, but her attempt to downplay her guilt will strain credulity in some quarters. The FBI opposed the death sentence. They hoped the Rosenbergs would co-operate with the government in order to receive a lesser punishment but, even after her husband was dead and Ethel was being led to her execution, she refused to save herself.

Anne Sebba has written a powerful biography of a wife, mother and woman, caught by a system determined to make an example of her and betrayed by those she thought she could trust.