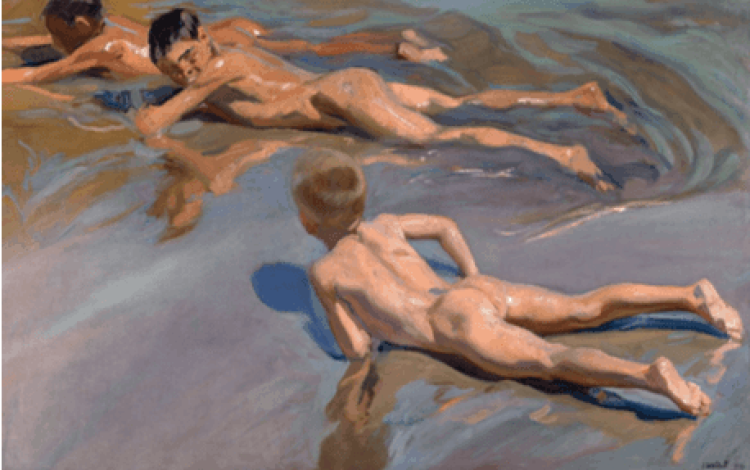 Unashamed joy: the delights of nakedness under a erce sun captured by Joaquín Sorolla in Boys on the Beach (1909)
View Full Size
1
of 1

If I were in Madrid with time to visit just one gallery, it would be neither the Prado nor the Reina So a but the Museo Sorolla, my favourite of all the artists’ houses I know.

There for the rst time, 30 years ago, I was moved almost to tears by his painting of his wife and baby asleep in bed. Other than the two heads, it is a Whistlerian symphony in white and grey, and the touch of genius is a speck of white between the baby’s ickering eyelids. I had just become a rst-time father, which intensi ed the emotion. Will it be as beautiful in London?

Yes – surely. Joaquin Sorolla y Bastida (1863-1923) is often referred to as ‘Spain’s Impressionist’, which is not quite accurate. He was a plein-air painter and obsessed with light and the sun, but he is closer to the international Post- Impressionist masters of swagger, Blanche, Helleu, Sargent, Lavery, de Lázló and Zorn.

In this country, he is less well-known than elsewhere, and far less known than he should be. However, even here his paintings of Valencian beaches, with shermen working their boats, mothers and naked children at the sea’s edge, all under the erce sun, may well be recognised by many who cannot quite recall his name. Sometimes there is an unexpected jolt, as when one realises that the joyous infants attended by a priest or nun are in fact cripples from an orphanage, nding freedom in the water.

This, though, was only one side to his art. Elsewhere, social commentary is more prominent, or the swagger more evident, not only in portraits. In 1902, when he had already won international acclaim (receiving the Grand Prix at the 1900 Paris Exposition Universelle), he discovered Andalucia and, in 1907, Moorish gardens.

Thenceforward, gardens became a major theme. His own at the Madrid house is as lovely as the interior. As well as a master of light, Sorolla was a painter of sound and smell; he wants us to hear the splash and trickle of fountains and, in due season, catch the scent of blossom.

Unfortunately, at the same time he almost worked himself to death on the vast Vision of Spain project, recording all the regions and costumes of the country for the New York Hispanic Society. By 1920, in the post-war world, fashion had left him behind.

This major show is the rst in Britain for over a century, and brings together 60 major works from all parts of his career, on loan from European and American public and private collections. He has not been seen here properly since a 1908 show at the Grafton Galleries, when he was promoted as ‘The World’s Greatest Living Painter’.

There is an interesting, if probably unimportant, parallel to his near coeval Bonnard, still showing at Tate Modern until 6th May. Just as Bonnard always depicts his model and wife as young and healthy (even when older, ill and depressed), Sorolla’s wife and muse, Clotilde, scarcely appears to age over decades.