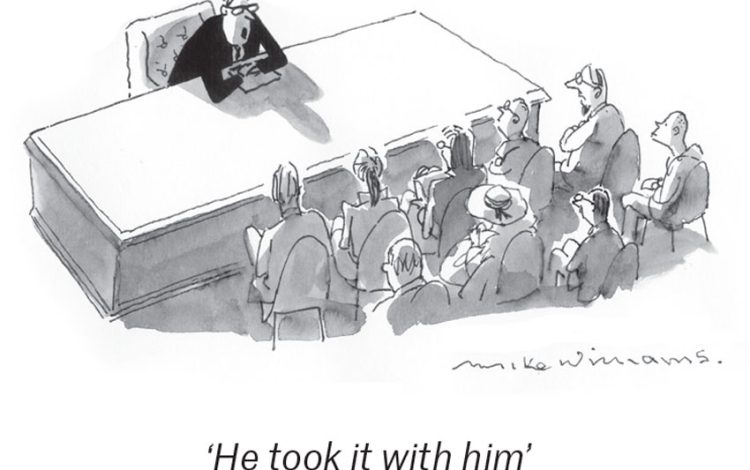 The corruption, the greed, the drugs, the brutality and the dominance of size over skill: what’s not to hate? asks Geoffrey Wheatcroft, after a lifetime of watching men hitting, kicking or throwing balls

On the first Saturday in June two pieces of sports news made the front pages rather than the back. Muhammad Ali had died too late for the Saturday papers, although the Sundays more than made up for it, as did the Mondays, and we had already learned that we had lost that great, flawed, rather wonderful athlete over the airwaves. What the papers did have that Saturday was another story: ‘Fifa chiefs paid themselves £55 million in secret.’

It’s too easy to invoke an imaginary past — or future, as Eamon de Valera did in his St Patrick’s Day broadcast in 1943, later much mocked, about ‘the Ireland we have dreamed of’ with ‘the romping of sturdy children, the contest of athletic youths and the laughter of happy maidens’. But I must admit that many a contest of athletic youths over the years has brought joy to my eyes. Then again, other sporting memories fill me with revulsion.

Like many people who once enjoyed playing games and still love watching them, I suffer from twinges of conscience. (Twinges of a more physical kind explain why it’s a very long time indeed since I was a quite useful tighthead prop, and pulled an oar in summer.) Do I spend too much time in front of a screen gawping at men hitting balls with bats or kicking or throwing them?

That question is answered with a resounding ‘Yes’ from my own hearth, which I might try to shrug off. But a more insistent voice inside asks me whether I’m not a fool, seeing that sport has so often betrayed us.

In these pages, I can be confident that many of my readers will remember the last — and first, and only — time that England won the football World Cup, and maybe also remember Cassius Clay (as he then was) beating Sonny Liston two years earlier, in 1964. But even those golden memories have a darker side. England didn’t really deserve to win the World Cup, and had reached Wembley by way of a startlingly dirty quarter-final against Argentina, still remembered in Buenos Aires as el robo del siglo (the robbery of the century). And anyway I recall the football of my boyhood, overweight players trundling around muddy pitches and winning by force rather than guile.

Likewise with rugby. When I was taken to the Varsity Match at the age of twelve, I stood behind grown men and didn’t see much, but I do remember some of the internationals of my boyhood, and their sheer numbing boredom. The game consisted of endless kicks into touch, the ball knocked back from the line-out to the scrum-half who booted it up again, culminating in the notorious Scotland v Wales match in 1963, which consisted of 111 line-outs. What a riveting spectacle!

Both those games have changed immeasurably for the better in terms of fitness and skill. Alas, rugby has also deteriorated, above all through the huge increase in the size of players. Gone are the days of the stubby prop and the willowy wing — a 15st wing is now commonplace — and although I’ve rarely seen a greater player than Barry John of the magical Wales and Lions sides of the early 1970s, one wonders how he would fare today, standing 5ft 10in and weighing 12st 12lb. Rugby is ominously going the way of American football, where a 20st linebacker is commonplace.

Even so, rugby football has some way to go before it sinks to the degradation of association football. I can still distinguish between the ‘game of eleven men against eleven’, truly beautiful to watch at its best, and the phenomenon of contemporary football, played by cheats and rapists, owned by gangsters, despots and pimps, and run internationally by a criminal conspiracy. What’s almost worse is that everyone knew this, or could have known if they had wanted to.

Before we learned of the way that Sepp Blatter and his colleagues (otherwise known as Ali Baba and the Forty Thieves) were lining their pockets, the corruption of Fifa, much like Jimmy Savile’s loathsome crimes, was in plain sight. The award of the 2018 World Cup to Russia was dubious enough, but Qatar 2022 is patently criminal, quite apart from the human horror of the hundreds of Nepalese workers who have died building its pharaonic stadiums.

And that is surely the worst of it. Beyond mere distaste for the coarseness and venality of so much sport, there’s the graver question of the physical toll extracted. Not only do I vividly remember Clay beating Liston, I can remember the way that I gradually ceased to love boxing, repelled by the sight of men battering each other’s brains out, and sometimes actually killing one another. It’s not quite certain that the Parkinson’s which ended Ali’s life was brought on by the pounding his head had taken, but we know for sure that large numbers of American football players end their careers in wheelchairs, or brain-damaged. And the arrival of EPO, the ferociously effective performance-enhancing drug that made Lance Armstrong the man he is, was heralded a quarter-century ago by a rash of seemingly inexplicable deaths of young Dutch and Belgian cyclists who’d been using the drug.

Corruption and glitzy brutality are bad enough. If anything could finally disillusion me with those contests of athletic youths, it would be seeing them as our version of Byron’s gladiators, ‘butchered to make a Roman holiday’.

My summer of love