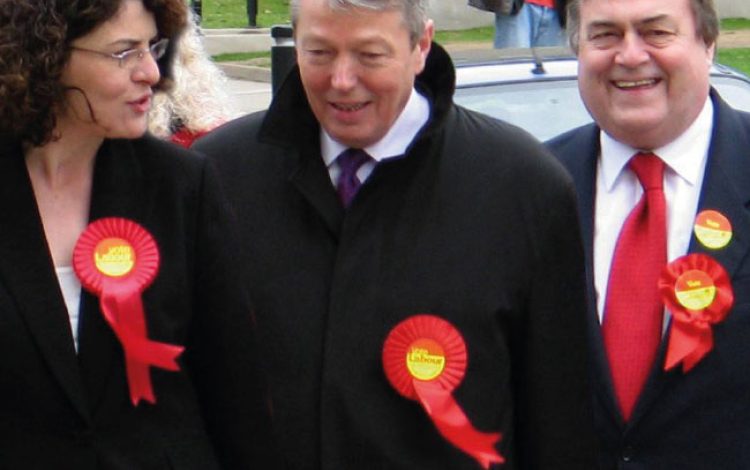 Alan Johnson, who turns 70 on May 17, recalls the ups and downs of his past campaigns

There are many things I miss about being an MP (the people, the prestige, the salary) but being part of the election process isn’t one of them.

Technological advances have changed most aspects of our lives, yet pounding the streets in pursuit of votes continues to be the main activity of the putative politician.

I had an advantage over my rivals because street pounding used to be what I did for a living. As a former postman, I’d had professional experience of the British public’s malevolence towards anyone with the temerity to stray into their territory.

In some parts of the world, householders put up signs welcoming the weary traveller. It’s not like that in Britain, where the route to the front door can be an obstacle course and the only message is a list of what’s prohibited: ‘No circulars’, ‘No salesmen’, ‘No weary travellers’.

Such instructions pre-suppose that anything could penetrate the vicious, metal finger-trap through which letters are supposed to go. If the British public spent as much time and effort making sure their letterboxes were accessible and at the appropriate height as they do on their bloody commandments, more people would be willing to work for Royal Mail – and there would be fewer ex-posties claiming incapacity benefit because of severed fingers and bad backs.

As a servant of the Post Office, the ‘no circulars’ edict never troubled me. Everything we conveyed was classified as Her Majesty’s Mail, which none of her subjects was entitled to refuse. As a candidate delivering my precious leaflets, things were different. ‘Can’t you read!’ the stroppy resident would yell as he (it was invariably a ‘he’) stormed out of the house.

Of course, I could reply in kind to this ignorant brute, displaying my long association with the written word and deploring his obvious ignorance of the democratic process. But I was placed at a disadvantage by the fact that I wanted his vote.

I became aware of how cynical householders could be when, as a young postman, I heard of a colleague who, one Christmas, saw a note pinned to the door of a house. He could see it fluttering in the breeze, as he unlatched the garden gate. It read, ‘Postman - please knock for your tip.’

He complied expectantly, only to be confronted by the master of the house. Without an ounce of Yuletide cheer, he pressed his face close to the postman’s and said, ‘Here’s your tip – shut the ****ing gate behind you.’

Some numbskulls, having received my carefully crafted ‘Vote Labour’ leaflet through their front doors, suddenly appeared and in a fit of silent apoplexy, ceremoniously tore it to shreds in front of me, before walking back inside with the air of someone impressed by their own profundity. On the canvassing return, listing voter intentions, we usually marked these houses down as ‘Don’t Know’, to cheer ourselves up.

Then there were the wags who’d invite me in, pretending to be floating voters. After half an hour of earnest conversation, they would reveal they were diehard Liberal Democrats who just wanted to keep me off the streets for a while.

This talent for deception was more pronounced amongst the elderly. All party workers know that, when encountering an ancient supporter on the doorstep, the opportunity should be taken to offer a lift to the polling station on election day. Often such journeys ended with a mollycoddled octogenarian wheezing with suppressed hilarity as they revealed that they were from the opposite camp, determined to waste the resources of the party they badly wanted to fail.

In Hull, the city I was proud to represent for twenty years, the people behind the doors I knocked upon were generally warm, friendly and sympathetic. But they did like to chat. Hull has its own telephone system. When I arrived, in the days when all local calls were charged, a subscriber could spend the day talking to someone else in the city for just 4p; said to be the cause of the Hullensian’s verbosity.

One evening, during the 2001 election, I found myself trapped on a doorstep by an elderly couple who had a great deal to tell me. While their recent experiences of the NHS were relevant and their stories about Hull during the war instructive, by the time we’d moved on to their conspiracy theory about Princess Diana’s untimely death, I felt the need to tear myself away.

I’d been driving a hire car with one of the early remote locking devices on the ignition key. The car was parked streets away but, as I listened to this couple while fiddling distractedly with the key in my coat pocket, there was an involuntary ring on their doorbell. There was general puzzlement until it dawned on me that, by some peculiar malfunction, when I covertly pressed the lock mechanism on my car key, it produced a loud ‘ding-dong’ on the doorbell. I began to press more frequently until conversation was impossible and, with all the deviousness and cunning with which politicians are rightly associated, I left them with some sage advice. ‘I’d get that fixed if I were you,’ I said, walking away as they regretfully turned their attention away from me to fetch a toolbox.

I kept pressing the bell-ringing key surreptitiously until I was out of range, safe in the knowledge that two more votes had been safely harvested.

The last boat to St Helena