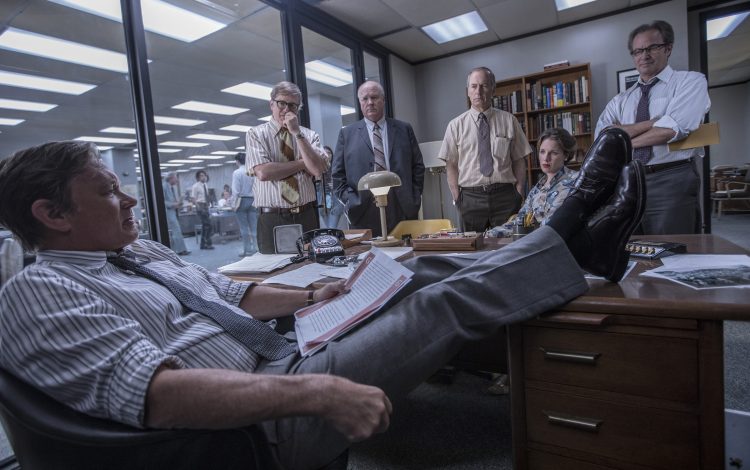 'History can be so disappointingly linear,' Marcus Berkmann concludes. But, about which film?

All the best, cleverest and most prestigious films are released in the weeks before the Oscars on 4th March. But are any of them any good?

The Post tells the story of the Pentagon Papers through their publication in the Washington Post in the early 1970s. The Papers showed that the US was losing the Vietnam War and always had been; and Richard M Nixon, who until recently was thought to have been the most deranged president ever, didn’t want anyone to know this.

Tom Hanks plays Post editor Ben Bradlee, and Meryl Streep is the newspaper’s owner, Katharine Graham. The whole, as directed by Steven Spielberg, is rather an old-fashioned film with a beginning, a middle and an end. Hanks is all warm-blooded authority and journalistic integrity, while Streep has a proper narrative arc: she moves from an under-confident, under-appreciated woman in a man’s world to, essentially, Meryl Streep. Do we quite believe this? I’m not sure where the character gets the steel from, and I don’t think Spielberg knows either. There’s a useful supporting cast of men in suits telling her to capitulate to Nixon’s bullying, and the whole film revolves on one wonderful long shot of her on the phone trying to make her mind up. This, of course, is where Streep earns her fee. But the film as a whole feels slightly underpowered, possibly because you’re expecting something else to happen, and it doesn’t. History can be so disappointingly linear.

Early Man is the latest from Nick Park and Aardman, who have brought so much joy into our lives with their Wallace and Gromit films. This one has jolly Stone Age types living in rural paradise, until awful Bronze Age types turn up, wanting to cut down the trees and use the Stone Agers to work in their mines as slaves. This rather grim story is leavened by the use of football as a random metaphor for something. Park, as we know, has an extraordinary visual flair and a gift for putting together brilliantly funny animated sequences. Maybe it’s my utter indifference to football, but I’m not sure this film entirely works.

The anachronism gags, of which there are many, quickly become wearing, but the real flaw is in the voices. Where would Wallace and Gromit have been without the brilliance of Peter Sallis? Where, for that matter, would Paddington be without Ben Whishaw? Here we have big names such as Eddie Redmayne and Tom Hiddleston in main roles, but they’re a little dull, which can’t have been the idea at all.

Finally, the much-lauded Three Billboards Outside Ebbing, Missouri, a film title so long there’s barely any room for the review. With a great performance from Frances McDormand and a surprisingly nuanced one from Woody Harrelson, this is a sort of crime film that sets out to upset your every expectation, and very often succeeds.

Writer-director Martin McDonagh has a wonderful storytelling talent, but occasionally he goes too far. There’s one character who, through the film, moves gradually from brainless, racist idiot to someone who might actually be a half-decent human being. While he’s admirably performed by Sam Rockwell, it feels like a change demanded by the story rather than real life. In fact, the whole film feels like a pitched battle between its naturalistic acting style and the high artificiality of the story. I’m not sure which one wins.

Oh, and Darkest Hour. Winston Churchill, who has a squeaky little voice through not smoking enough cigars, goes on the tube and chats to Londoners. No, he doesn’t. Not ever; not once.