Foolish Führer: Dictator Literature: A History of Despots Through Their Writing By Daniel Kalder 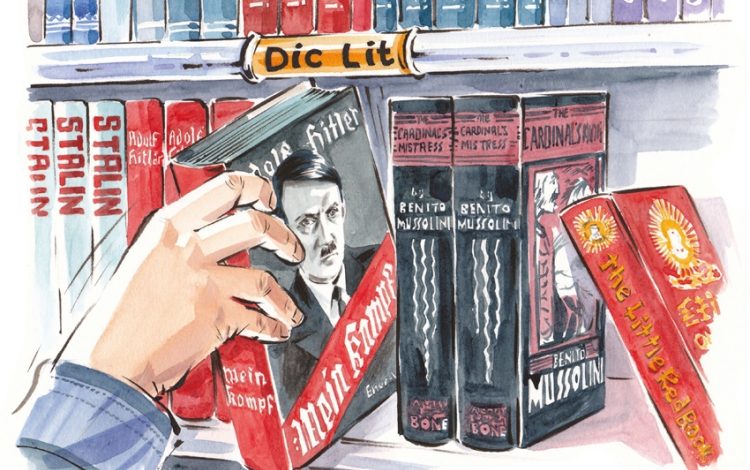 This book is hilarious and horrific, appalling and enthralling. It will also be essential reading for pub-quiz-setters.

1 ‘The rose’s bud had blossomed out/Reaching out to touch the violet./The lily was waking up/And bending its head in the breeze.’

2 ‘Forests blaze red beneath the frosty sky,/The wrath of heaven’s armies soars to the clouds.’

3 ‘Is death a man, and thus to be fought, or a woman to whose tender embrace we must surrender?’

5 ‘After the flagellation, while his livid flesh was swelling under the bloody lashes, the image of Claudia would leap before his eyes. Claudia nude, quivering, seductive, offering the mortal caresses of Cleopatra!’ *

Daniel Kalder’s epic yomp through the wastelands of ‘dic lit’ – as we must surely call it, even if he never uses the word – starts with Lenin.

He established the tradition that communist autocrats must publish or perish, and his heirs duly upheld their authority by sheer, skull-crushing weight of verbiage.

No words were too trivial to be preserved. Volume 13 of Stalin’s collected writings includes his message to a combine harvester factory in Saratov: ‘Greetings to the working men and working women and the entire executive personnel of the works!... Forward to new victories!’

Literary landfill of that sort can be found in the works of any 20th-century despot, from Nicolae Ceaușescu to Kim Il-sung. No wonder Kalder is so excited when, once in a while, he sees something glittering amid all the rubble and sludge. Could it be a precious nugget? No, of course not – but at least it’s a welcome change from rote pap.

Thus he perks up when Colonel Gaddafi’s The Green Book, after two volumes of banalities, suddenly becomes ‘an almost stream-of-consciousness tour of the colonel’s musings’ – about boxing and wrestling, gravity and the sun, and the fact that, ‘according to gynaecologists’, women menstruate and men don’t.

‘When a woman does not menstruate,’ he adds, ‘she is pregnant.’

Clearly his gynaecological sources hadn’t heard of the menopause.

One thing you won’t ever find in dic lit is humour, but Kalder fills the gap (and keeps himself sane) with a scathingly funny running commentary. He is a dab hand at damning with faint praise.

‘Although it is by no means good,’ he says of Mussolini’s salacious novel, The Cardinal’s Mistress, ‘at times, it at least borders on the readable.’

Enver Hoxha, who published 68 volumes of ideology and another thirteen of memoirs, ‘seems to have been one of those fortunate authors for whom writing came with little effort’.

Mao’s poetry was ‘at least competent… not as bad as Hitler’s painting, but not as good as Churchill’s’.

He is less generous to Mao’s theoretical writings, which were revered in the 1960s by French intellectuals – always a bad sign. ‘Tedious and banal’ is his brisk verdict on The Little Red Book, the bestselling publication in history after the Bible. Kalder tells of a zealot who tried to inveigle his way into a comrade’s affections purely through Mao quotations, wooing her with lines such as ‘We must have a firm grasp, and secondly be attentive to politics’.

He saves his fiercest criticism for Adolf Hitler’s prose. He argues that, whereas Lenin reveals himself in The State and Revolution to be ‘a brilliant man who has persuaded himself to believe in nonsense’, in Mein Kampf Hitler exposes himself as ‘a posturing autodidact who seems to have no difficulty believing the utmost drivel’. Hitler is also ‘staggeringly incompetent’, unable at the age of 35 to grasp basic spelling, grammar or punctuation.

Yet this semi-literate tosh sent Germans into a lethal frenzy. Without the benefit of hindsight, how could anyone have guessed its potency? That, Kalder concludes, is the problem with the writings of wannabe dictators: ‘Their sheer awfulness makes it impossible to believe in their power to infiltrate and transform brains until it is much too late.’