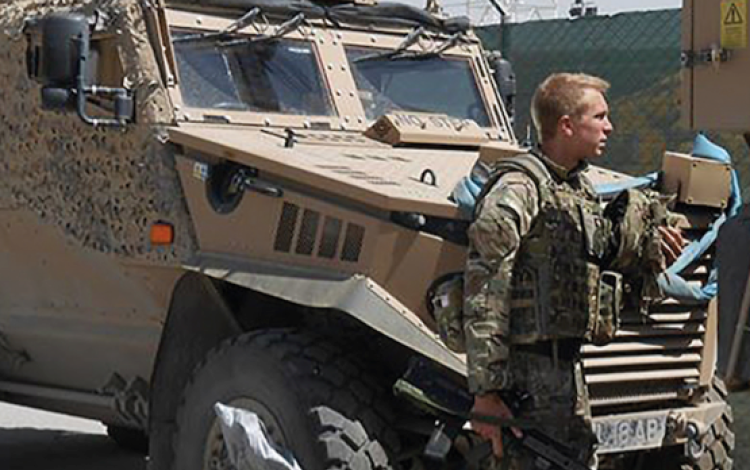 ASH Smyth was a choral scholar and Egyptologist at Magdalen College. Instead of becoming an officer, he chose to join the ranks. As the British prepare to leave Afghanistan, he remembers his tour of duty

20 years ago, American and British forces arrived in Afghanistan during the week I arrived at Magdalen College, Oxford.

I didn’t give the war much thought – although the ‘War on Terror’ was immediately everywhere. I had an Egyptology degree to get to grips with, evensong to sing (I was a choral scholar at Magdalen), hockey to play, girls to chase and booze to drink.

I was on a trip to Cairo during the following academic year, when Coalition troops invaded Iraq. And then I taught in Sri Lanka, which had its own war. Later, I took a Master’s in the War Studies faculty at King’s College, London. But still I didn’t think of war as something I would get involved in.

I am not what you might call natural military material. ‘Independent-minded’ was, I think, my old headmaster’s gentle euphemism. My upbringing, too, hardly prepped me for it. As kids, we weren’t allowed toy guns, and we had a ban on TV and games that involved violence. My brief time in the RAF cadets expired when we were tested on the rank structure. I don’t like polishing. I left the Cubs as it clashed with choir practice.

But once I had begun to earn a living (ha!) as a writer, I thought perhaps I could be a war correspondent – and so thought I’d better learn a bit about it.

At 28, I was already too old to become a career officer. It’s been done, anyway; the literary-officer thing. So I joined the Honourable Artillery Company (HAC), an ancient and idiosyncratic Army Reserve (then called the Territorial Army) unit, in a modest Victorian castle off City Road in the City of London.

An HAC field weekend will typically involve more PhDs than big guns. The HAC is the British Army’s oldest regiment, founded in 1537 by Henry VIII. I’ve found one of our members depicted in the National Portrait Gallery; and the regiment once supposedly fielded an entire rugby team called Henry. In times of conflict, many members have served their country with distinction.

So, in November 2012, I volunteered for Operation Herrick – the so-called ‘Fourth Afghan War’, from 2002 to 2014 – as Trooper Smyth (30075856), attached to 5th Regiment, a surveillance unit of The Royal Artillery under the operational aegis of 1st Mechanised Brigade. We were sent to ‘integrate’ at Catterick in North Yorkshire, where the regular soldiers promptly dumped us in a disused block which stank of fish, six miles from the regimental HQ.

We did not have much in common with the regular soldiers. The gunners called us STABs right from the get-go (‘Sad TA Bastards’). They looked, and behaved, like kids. They lived to massacre the English language (‘squaddielalia’, as my HAC friend Harry called it), to an anthropologically fascinating degree. They were all called Brown or Thompson. And they almost all outranked us. It’s one thing playing trooper, part-time, in a regiment that thinks it ungentlemanly to be a try-hard. Quite another in a unit where everyone else has just been made lance corporal.

I was thirty-one. Many of the regular soldiers weren’t far off half my age. The concept of my being a writer was quite beyond them. Most of them thought I was ‘on the dole’.

They are suspicious of anyone who likes to do things quietly and/or alone. Harry got screamed at for having his Kindle out while everybody else was on a smoke-break. They took a person sitting on his own as evidence that he desperately needed some company. I kept myself to myself. On the few weekends I couldn’t get away, I made for a tea-room in the centre of Richmond (100 per cent soldier-proof) or hit the charity shops.

Us part-timers were also concerned we might turn out to be less competent. I didn’t worry so much after I saw regular soldiers drop magazines out of their rifles mid-range, lose their morphine pen, or pass out at a memorial parade.

Heading down the M1 to RAF Brize Norton, I listened to Handel as loud as I could. My heavy kitbag was full of books, and a tin Rodin’s Thinker from my father, with the inscription, ‘What if the Hokey Cokey really is what it’s all about?’

Bin Laden was long dead – and the Afghan war films already in the cinema – by the time I touched down in Helmand. It turned out there was not a lot for us to do there. During the accelerating British ‘drawdown’, our surveillance role was essentially reduced to base protection.

In the first week, Camp Bastion, in Helmand Province, came under rocket attack. But, after that, things quietened down. I was shot at twice more, by my count. Us Reservists twigged we were on the subs bench, stuck fixing broken camera equipment six days a week in the ‘gun park’. I cut my losses, reverted to intellectual type, and was drafted into the Ops Room. It took a day before a gunner complained I’d told him what to do.

I read even more voraciously than usual (all the major prophets of doom – Frank Ledwidge; Max Boot; George MacDonald Fraser – as well as Cormac McCarthy, for light relief). I took endless notes (the army’s requirement that you keep a notebook is a useful cover). I made coffee, sorted post, put people and matériel on planes, and answered the phone. One day, it was the 5th Regt CO, calling to find out if my boss, a Cambridge music graduate, had once been in Mumford & Sons. (He had.)

I keenly volunteered for things: duty driver; watchtower; even a guard shift at the prison. Getting out of the Ops Room was still the high point of the day. I’d take any excuse to drive down to the flight line, where the aircraft were parked, with top secret packages or surveillance spares that needed a responsible courier, looking for likely types to chat to.

I had lunch one day with the major in charge of the transport containers. Chaplains, too, are usually good eggs. The unique HAC dress regs – no regimental or brigade ‘flashes’, and a florid cap badge only worn by some five hundred people in the entire armed forces – made us look like special forces. Officers chatted to us, while soldiers treated us with useful caution. A Private Brown once asked, out of nowhere, if I’d been to ‘college’. I chose not to say, ‘Of course, dear boy. Magdalen College.’

Eventually, I got out – to Kabul. The first thing I did was send a postcard home, of Lawrence of Arabia (another Magdalen man who joined the ranks, as Aircraftman Ross). ‘Made it,’ I wrote.

My new job in Kabul was surveillance. It wasn’t that exciting – but at least there was some purpose to it. No one was blown up on my watch.

It was a happy time. Keeping myself to myself, out and about, and being, as near as damn it, my own chain of command.

My favourite feeling was to come off a night shift (whole hours of alone time), eat, drink coffee and write a letter in the rising sunlight. If bored, I chatted to the Sri Lankans who manned the kitchens.

I was in Camp Souter, Kabul, named in honour of Captain Thomas Souter, one of the handful of survivors of the disastrous British retreat from Kabul in 1842. I went to Forward Operating Base in Shawqat, Helmand – a mud-brick castle built by our military forebears, which the locals, perhaps mischievously, said we should feel free to use again this time around.

Then I went to Camp Qargha in Kabul; and to Lashkar Gah, capital of Helmand Province, days after Task Force Helmand shut up shop there, taking the top brass back to Camp Bastion. I was briefly grilled by a colonel from the Adjutant-General’s Corps. He was convinced I must be gouging the MoD for some inflated City salary, when I was on a private’s pay (and very glad of it!).

I got close to interviewing my overall boss at the time, Brigade Commander Rupert Jones (son of posthumous Victoria Cross winner, Lt Col H Jones, killed in the Falklands War at Goose Green in 1982). It was felt, though, in the end, that this might pose problems with ‘authority’ – a private asking a general what we were doing there.

I even ran into an ex-girlfriend – from Magdalen – working her way up through the Foreign Office. What she made of my trajectory, she was too polite to say.

I escaped the lines one final time, to write an in-house article on the closure of Patrol Base Attal in Helmand. I never filed it. But for one great week, I slept under the stars, shaved in a bowl, and lived entirely on ration boxes. ‘Finally, some f***ing soldiering,’ I thought. I was on the last flight out of Attal, before it was ploughed back.

Dr Johnson said, ‘Every man thinks meanly of himself for not having been a soldier.’ I look back on my deployment proudly. But I cannot say I’d recommend the squaddie life.

We landed back in England, at Brize Norton. As the train pulled out of Oxford, I forbade myself to look back at the dreaming spires.

ASH Smyth is writing a book about Afghanistan

The Grand Old Duke of Wellington